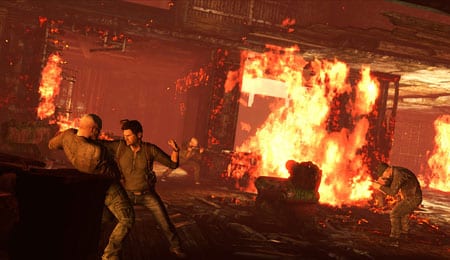 BY MIKE CHEN and HERIJA GREEN

Uncharted 3: Drake’s Deception had a bit of a challenge when it was announced – how on earth could it topple Uncharted 2: Among Thieves? The series’ second entry was pretty much the unanimous choice for Game of the Year in 2009, and people still refer to it as a watershed moment for this generation. While it’s true that Drake’s Deception isn’t a vast improvement over Among Thieves (is that really a bad thing?), it’s still a heck of a ride and one of the best gaming experiences you’ll have all year.

In terms of story, Drake’s Deception has one major advantage over the other games in this series. The original, Drake’s Fortune, introduced us to Indiana Jones-meets-Evil Dead hero Nathan Drake while Among Thieves expanded his world but focused on gameplay and design improvements. Drake’s Deception opens with a bang and quickly establishes a story arc that is an intensely personal quest for Nate and Victor “Sully” Sullivan. So while the gameplay may essentially mirror Among Thieves, Drake’s Deception’s story carries a lot more emotional weight, and that makes every shootout and narrow escape all the more intense.

Simply put, if you’ve played Among Thieves, then Drake’s Deception won’t surprise you with any controls. It’s a cover-based shooter mixed with platforming and occasional puzzle-solving. Naughty Dog hasn’t reinvented the wheel, it’s merely fine-tuned it – which, if you consider the number of Game of the Year awards Among Thieves won, isn’t necessarily a bad place to start.

You could pretty much play Drake’s Deception the same way; however, there are a few new tricks up Nate’s sleeve as he fights pirates (the terrorist kind, not the YARRRR kind), evil agents, and giant spiders, among other things. First off, Naughty Dog has revamped the melee combat system so that counters become a more viable option. In fact, the counter mechanic seems cut-and-pasted from Rocksteady’s Batman games, and since it worked so well for The Dark Knight, why not Nathan Drake? Melee is also context-savvy to the environment, so if there’s an object nearby, Nate will pick it up and whack his opponent with it. My personal favourite was slapping around a bad guy with a big frozen fish. All of this makes melee combat much more fun this time around, and I used it whenever I could, sometimes foregoing the smarter cover/gun route to mad-dash at bad guys a la Han Solo on the Death Star.

When Nate’s in cover, he’s bound to get bombarded with grenades, since the improved enemy AI tries to flush him out quite a bit. Naughty Dog gives you another weapon with this by allowing you to tap triangle to toss the grenade back (a visual cue tells you if you’re within range).

The gunplay is carried over from Among Thieves, and there has been some early grousing about problematic aiming. I played Among Thieves immediately before jumping into Drake’s Deception, and from my perspective, it isn’t the aiming that’s changed, it’s the enemies. They move quicker and in general have more animations, so it’s simply harder to get a bead on them. Thus, like Among Thieves, the gun/cover mechanic is solid but not the best out there. You’ll still get caught on the occasional corner as you try to avoid stuff and your reticle will still be a little too sensitive for your liking. I’m thinking that Naughty Dog will probably patch in X/Y sensitivity sliders at some point just to address the complaints.

Similar to my Gameplay comments, if you’ve seen/heard Among Thieves, then you’ve seen/heard Drake’s Deception. From a graphics perspective, you get more variation in environments, both in locations and weather, so it’s a brighter and bolder experience. The scope of some levels eclipse those seen in the previous games, so while the backgrounds and environments may technically be as detailed as they were before, the variation and grandeur makes the visual experience that much better.

The main character models meet the bar set last time around, and they continue to look halfway between real life and a pulp comic book. Elena Fisher actually looks a little different, as I think they altered the model just a tad to look more like voice actress Emily Rose. There’s really not too much to improve or change, though you do get to see Nate decked out in a suit this time around. As for enemies, that’s always been one of Uncharted’s few weaknesses, as enemy variety isn’t abundant. This time around, the enemy skins swap based on the locale, but they’re all basically the same group of guys — soldier, armoured soldier, big guy you have to fist-fight.

The Uncharted series continues to set the standard in terms of voice acting, and Drake’s Deception meets all expectations there. Nolan North’s Nathan Drake is as wry and likable as ever, and the other principal actors (Rose’s Elena, Claudia Black’s Chloe Frazer, and Richard McGonagle’s Sully) are like a night out with your old college buddies — assuming you majored in shooting bad guys and minored in climbing stuff. Newcomer Rosalind Ayres makes a memorable turn as antagonist Katherine Marlowe, though her henchman (Talbot, played by Robin Atkin Downes) is pretty forgettable.

When the Uncharted series first debuted around the PS3’s launch, the initial reaction was, “A cover-based shooter with some guy in jeans? Okay…” However, Naughty Dog has shown that it’s able to turn the seemingly ordinary into something much greater through three critical areas: pacing, set pieces, and character. In its simplest form, Drake’s Deception follows the series model of interchanging gunplay, platforming, and puzzle-solving. Each of these are given the appropriate length so you don’t tire of any; in fact, when meshed with the exquisite set pieces, you’ll often find the gunplay and platforming merge together and the whole is far greater than the sum of its parts. It’s damn fun, despite the fact that the Drake sometimes doesn’t quite go where you want him to during fast-and-furious moments, as his jumps can sometimes catch a wall or a corner.

Uncharted’s set pieces are pretty much Naughty Dog’s signature – people are still talking about Among Thieves’ spectacular train sequence. The design theme for Drake’s Deception seems to be the employment of shifting environments, either through literal shifting (as in, that boat you’re on is freakin’ capsizing) or destructible walls and floors. There’s a set piece about a quarter of the way through the game that involves an escape from a burning mansion, and between the floor giving out, the bad guys shooting away my cover, and the burning walls, it easily eclipsed the final levels on so many other games. In fact, I could probably easily rattle off memorable moment after memorable moment, though my favourite by far was when Drake mounts a horse. If you ever wanted to play out that scene in Indiana Jones and the Last Crusade when Indy attacks a tank by horseback, this is pretty much it, and it’s awesome.

There are a few extended areas where the Naughty Dog team took a page out of the Hideo Kojima (of Metal Gear Solid fame) playbook. No, not the very long cutscenes, but rather Kojima’s ability to give you control of the main character while telling a story around you — think of Metal Gear Solid 3’s ghost walk or Metal Gear Solid 4’s radiation tunnel. These put you in the character moment and are a nice break in the action.

Some games are all action, no story. Uncharted manages to blend the two together so that both drive each other. When the story raises the stakes, your attachment to the characters becomes heightened and the action get more intense. It’s a delicate formula, one that Naughty Dog achieves without going too deep into the cutscenes. By now, we already are familiar with and like Nate, Sully, and Elena, so the focus zeroes in on how well we truly know them. By the end, a personal tale is told and the character histories become more developed. People often compare the Uncharted to Hollywood blockbusters but I challenge you to find any recent summer Hollywood blockbuster that has the wit and heart of Amy Hennig’s script from either Among Thieves or Drake’s Deception. Give me a Nathan Drake adventure over a Michael Bay movie any day of the week.

The single player campaign is a good 10-to-12 hours, and some have griped that it’s not a 50-hour extravaganza. To me, that seems like an absurd complaint; why bother comparing a game to an entire other genre? It’s not pretending to be open-world or RPG, and that’s fine. However, when you’re done with the core game, there are other game modes to try.

Among Thieves introduced multiplayer to the series, and Drake’s Deception carries this over. There’s not too much different — in that you can play competitive variations (team deathmatch, capture the idol, zone defense/takeover) or co-op. Co-op brings three players into fairly generic treasure-hunting situations that fall outside of the main story or a firefight through actual game levels. Co-op can also be played in survival and arena modes. Thieves’ multiplayer was surprisingly fun, and although you’re not getting too much new here it’s still fun and a good way to keep the disc in your PS3, but it won’t become a multiplayer phenomenon a la Call Of Duty. The game’s feature attraction is still the single player campaign.

The only real problem with Drake’s Deception is that it’s not a giant leap forward from Among Thieves. Naughty Dog has perfected its formula, bringing us a game with solid controls, spectacular level design, and memorable characters. With a quest that delves into Nathan Drake’s history and personal demons, it’s a memorable journey that’s one of the most rewarding experiences you’ll see on any console – along with a fun multiplayer.

The best way I can sum up Drake’s Deception is this: on the nights I played the main campaign, I looked up at the clock and didn’t realize just how late it got because I was so engrossed in both the game and the story – and when I got to the final act, I didn’t want it to end. Batman: Arkham City may be bigger, The Elder Scrolls 5: Skyrim may be more expansive, Modern Warfare 3 and Battlefield 3 may have better multiplayer, but I’m betting of all the big releases for this year, none is as pure fun as Uncharted 3: Drake’s Deception.

There are plenty of nitpicks to be found over the course of Uncharted 3 — the aiming isn’t all that precise, some of the “escape” sequences go on longer than they should, enemies appear out of nowhere and all of them pretty much look the same — but when you step back and view the package as a whole, this is everything a next-generation video game should be.

Graphically, Uncharted 3 looks amazing, and the implementation of environmental objects into melee combat is a subtle thing that makes a huge difference when it comes to immersion. The story is cleverly written, but that ends up taking a backseat to the individual performances. So what you end up with is ultimately a character-focused action-adventure that makes you invest emotionally in the outcome — something precious few games (Red Dead Redemption and Mass Effect spring to mind) accomplish.

If you’re someone that has resisted taking the plunge and buying a Playstation 3, then Naughty Dog’s Uncharted 3 is the perfect excuse to give in. It’s that good.

By Mike Chen
This entry was posted on Wednesday, November 9th, 2011 at 12:09 pm and is filed under Herija Green, Mike Chen, Video Game Reviews. You can follow any responses to this entry through the RSS 2.0 feed. You can leave a response, or trackback from your own site.