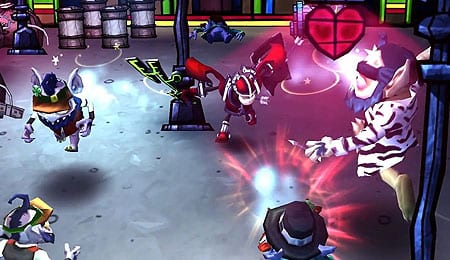 Get used to seeing arrows protruding from DeathSpank’s armour.

Although not mentioned in the title, Hothead Games’ signature hero, DeathSpank, is back for his third go-round on the Xbox Live Arcade and PlayStation Network in The Baconing. Pretty much all of the elements that made the original such a hoot are back, but with three releases in a 14-month span have we reached the point of oversaturation?

If you played either of the first two DeathSpank games then you’re already familiar with the control scheme. If you’re new, combat is of the hack ‘n slash variety with the four face buttons each wielding a weapon while the d-pad deploys various potions and secondary items. The Baconing does add a shield bash that can ward off melee and ranged attacks, but I had issues throughout where my guard would be broken without me realizing it because of how busy the screen gets.

There’s charm and sight gags aplenty here with lots of unique locations to be explored. A twisted theme park and leprechaun-infested Vegas style casino are a couple of the more interesting settings, but while everything looks good, it never quite felt as inviting as the original DeathSpank. Also, as touched on in the controls section, the screen can fill up with enemies, items and visual effects to the point that you’ll have little choice but to mash attack buttons and hope you come out of the fray in one piece.

Michael Dobson returns as DeathSpank, lending his signature voice and timing to another strong round of voice acting. The inherent goofiness of the characters remains one of the series’ best elements, and much of that is conveyed through their dialogue delivery. The music and sound effects are solid.

In typical DeathSpank fashion, the story of The Baconing is patently ridiculous. The Hero of the Downtrodden has made the careless mistake of donning all the thongs of power at once, which in turn has created the Anti-Spank. This villainous robot is now laying waste to the land and to defeat it you’ll need to destroy the thongs one at a time. The rub: these magical thongs can only be destroyed in mystical bacon fire — that means it’s time to start adventuring.

One thing series veterans may notice is that while this game looks and sounds very much like the first two, there has been a clear shift toward a more combat-heavy experience. That means many of the more irreverent quests have been replaced by additional missions of “enter this area and kill everything that moves.” There’s still a certain appeal to it thanks to all the crazy weapons you wield and unusual foes you encounter, but I found that it became a bit excessive.

Part of the reason for that is the repetitive nature of the combat. Most notable was the proliferation of groups that seemed to constantly have both melee and ranged attackers. These scenarios almost always devolve into wars of attrition where you’re forced to drop your guard to kill the melee fighters, which opens you up to an incredibly fast and accurate barrage of arrows. And while it’s true these two-pronged assaults rarely defeated me, it usually forced me to pause to eat food and regain health, which artificially slows the pace down.

Also disappointing was the highly linear nature of The Baconing, as branching off the main path or backtracking to previous areas was rarely necessary. In that same vein, there were precious few instances where I’d locate an item that wasn’t level-appropriate for my character. I keenly recall finding higher-level weapons and armour in DeathSpank and being excited to reach the point where I could use them. Here it seemed like as soon as I leveled up I found that level’s complete armour set and weapon(s) in short order.

While that all may make it sound like I’m down on the game, that’s not really the case. The cast of wacky characters still comes together to create a fun time punctuated by lots of sophomoric humour delivered in a decidedly over-the-top fashion. Hothead certainly hasn’t skimped on the campaign, either, as this is another downloadable title you can expect to eat up a respectable chunk of time — figure somewhere around eight hours on the default difficulty setting.

Co-op also returns, and while it features two cool new characters and is quite enjoyable, it’s unfortunate that online play hasn’t been added. You’re still confined to local only, which means if you want to see a hammerhead shark in a suit shoot lasers out of his eyes you’ll need to wrangle up a buddy.

While not nearly as fresh or enjoyable as the original, The Baconing still offers up plenty of fun for those that have enjoyed the series. However, if you didn’t like the first two or feel you’ve had your fill, there’s unlikely to be anything here that’ll change that tune.

By Herija Green
This entry was posted on Saturday, September 3rd, 2011 at 10:15 pm and is filed under Herija Green, Video Game Reviews. You can follow any responses to this entry through the RSS 2.0 feed. You can leave a response, or trackback from your own site.