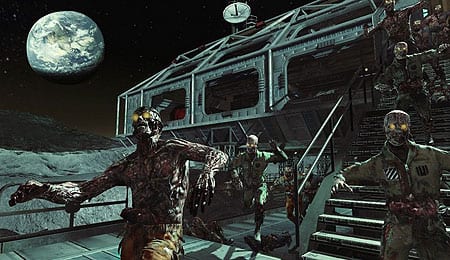 So which one is Sam Rockwell? Or is he all of them?

Treyarch and Activision’s aggressive post-launch support of Call of Duty: Black Ops undoubtedly reached its conclusion earlier this week with the release of the Rezurrection Map Pack. Unlike the first three rounds of DLC, Rezurrection features no additional adversarial maps, instead bundling the four zombie maps from Treyarch’s 2008 release, World at War, and adding one all-new map (Moon). Anyone that purchased the Hardened or Prestige editions of Black Ops received this content free of charge, but those that didn’t will have to pony up 1,200 MS Points (US$15) to download these five zombiefied locales.

Now, normally with map packs, I like to go through each new area and provide my thoughts, but since all Zombie maps fundamentally play the same and four of the five locations (Shi No Numa, Verruckt, Der Riese and Nacht Der Untoten) are ripped directly from World at War I’m going to forego all that and only discuss the newcomer in detail.

That would be Moon, which answers the age old question, “Can zombies survive in outer space?,” with a resounding yes. You begin on Earth in a location referred to as No Man’s Land, which provides a potentially significant challenge right out of the gate as the small space fills up with zombies and hell hounds in a matter of moments. I say potentially because you can leave the area in under 30 seconds and transport to the moon, but there are a couple powerful items available if you can stay alive long enough to earn the points necessary to purchase them.

Once you make the jump you’ll have to grab yourself a mask because, you know, there’s no breathable oxygen on the moon. Plus, as Alien taught us — in space, no one can hear you scream… and no one can hear zombies approaching, either. Indeed, Moon is an almost entirely silent affair, which makes for a cool wrinkle in a mode that still ultimately boils down to killing zombies to advance deeper into an area and buying increasingly more powerful weapons along the way.

Like “Call of the Dead,” Moon features a constant stalking presence, though the lumbering astronaut with the red pseudo Gamertag doesn’t deliver a fatal blow and moves slowly enough that he constitutes more of a nuisance than a menace.

As for the reissues, all four of the World at War maps appear to be identical to the predecessors in terms of layout and graphics, though you will find that some of the weaponry has been updated to match Black Ops’ timeframe.

If you love Zombie mode and either: (a) didn’t play the four World at War maps during their initial run; or (b) want to replay them with a group of friends, it’s easy to recommend downloading this. The older locations still hold up very well, and Moon is a quality addition. However, if you don’t fall into one of those two camps you might find the 1,200-point asking price for Rezurrection too steep.

So, follow me on this — you love playing Zombie mode with your buds, BUT you’re a little short on MS Points right now. Sound familiar? Well, good news, thanks to our friends at Activision we’ve arranged for two of you to download these maps on the house!

Wait, what’s that you say, you’ve got Black Ops on the PS3? Well, I can’t get you any Rezurrection codes for that just yet, but I can hook someone up with the Annihilation Map Pack for PS3! See? We’ve got something for everyone!

To enter simply post a comment here telling us your favorite Zombie map of all time and include your console (360/PS3) as well as your @Twitter name if you have one.

Winners will be selected at random on Friday, Sept. 2. All entries must be received by Friday at 5 PM EST/2 PM PST. Please note that although anyone can enter you must be following me on Twitter or submit a working email address so that codes can be sent to you.

By Herija Green
This entry was posted on Friday, August 26th, 2011 at 11:59 am and is filed under Herija Green, Video Game Reviews. You can follow any responses to this entry through the RSS 2.0 feed. You can skip to the end and leave a response. Pinging is currently not allowed.