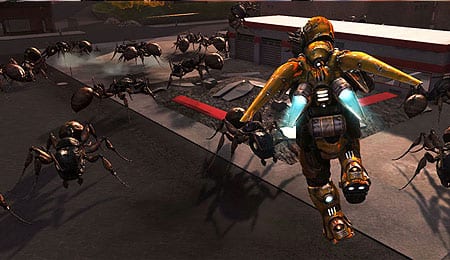 Wipe them out. All of them…

As I’ve often written in this space, the shooter market is a dense one — to say the least — with plenty of contemporary warfare games jockeying for position. In stark contrast to these titles that strive to give the player some semblance of realism is D3 Publisher’s recent release, Earth Defense Force: Insect Armageddon — a game that revels in its shortcomings like a classic B movie.

Outside of the basics (move with the left stick, aim with the right and fire with the right trigger), Insect Armageddon has an unusual (and limited) setup for a third-person shooter. For starters, there are no grenades or melee attacks. Sprinting and evasive rolling are handled via the bumpers while the face buttons do things like switching weapons and reloading. If you select a class that has a special ability, it can be used with the left trigger.

While all of that works fine once you get accustomed to it, there are a couple of problems. The most significant is the timed reloading mechanic (think Gears of War’s active reload), which is maddeningly imprecise. In Gears of War I can nail about 99 per cent of my reloads, but here it’s much closer to a 50/50 proposition. And that doesn’t even count the times when on-screen explosions make the meter completely blend in to the background.

Also working against the controls is the lack of vibration when firing. Unlike basically every other shooter on the market, Insect Armageddon provides no rumble feedback when pumping rounds out of your assault rifle. Even after many hours of gameplay I still subconsciously think something is wrong when I pull the trigger and don’t feel the typical video game “recoil.”

Although it unquestionably possesses a certain level of charm, the graphics in Insect Armageddon don’t even approach what you saw in big budget shooters from two or three years ago. The environments in particular repeat liberally and offer little detail, though it’s fun to watch buildings crumble after firing a few rockets into them. At least the game’s enemies look pretty good, particularly the bugs, which often fill the screen and are fun to exterminate. Unfortunately, that screen filling is frequently accompanied by some noticeable slowing.

There isn’t much on offer in terms of memorable music or sound effects — the lone exception being the War of the Worlds inspired call of the large enemy robots. Voice acting is pretty solid, and it does a nice job of promoting that B-movie feel.

Aliens are invading! And this time, they’re bringing giant insects with them. The odds are stacked against humanity, but you, as a member of Strike Force Lightning (a fantastic name in the same vein as The Office’s “Threat Level: Midnight”), wouldn’t have it any other way. Anyone expecting a first-rate story can forget about it as what’s here is simple, cheesy goodness.

With little variation, you and your squad mates have two objectives: 1. find the Ravagers (the general term used for the combined insect/alien armada); and 2. kill the Ravagers. A few boss fights will be sprinkled in throughout the 15-mission campaign, but there’s nothing realistic or tactical about any of the game’s combat. This is a title where you basically shut off your brain and just revel in the act of eliminating wave after wave of massive insects.

Insect Armageddon isn’t a long game, but it’s built to encourage multiple playthroughs. Each mission begins by offering you four different character classes to choose from. The differences aren’t purely cosmetic, either, as each class grants you access to different weapons, health levels and secondary abilities. With all four classes leveling up individually, three difficulty settings to choose from, a survival mode and a remixed campaign (same areas, different enemy layout) that unlocks once you finish the game, there’s quite a bit of replay value.

To maximize your enjoyment of the game’s campaign, though, you’ll want to team up with friends, whether online or via split-screen co-op. Insect Armageddon is repetitive by nature, but it’s amazing how much of that is assuaged with other players. Alone it feels like a grind. Together it becomes much more enjoyable as you share in the absurdity of being outnumbered 500-to-1. I’d also suggest this is an ideal game for someone that wants to play with others without communicating — because given that every level boils down to piling up kills, there’s no real need to strategize.

Of course, many of the items I’ve listed here as strengths could also be considered weaknesses based on your personal taste. There’s minimal story, no reason for exploration, uncomplicated point-and-shoot combat and nearly all of the challenge found here boils down to a war of attrition with the bosses absorbing hundreds (if not thousands) of rounds before falling. Checkpoints don’t exist, either, so you can spend 20 minutes on a level and be sent back to the start if you and your team are killed.

Launched at a bargain price of US$40, Earth Defense Force: Insect Armageddon is more an alternative to spending an evening playing Halo or Call of Duty than a knockoff. Some will find the repetition mind numbing, but I appreciated its straightforward nature and enjoyed my sessions of gratuitous bug slaughter.

By Herija Green
This entry was posted on Friday, August 12th, 2011 at 8:54 am and is filed under Herija Green, Video Game Reviews. You can follow any responses to this entry through the RSS 2.0 feed. You can skip to the end and leave a response. Pinging is currently not allowed.