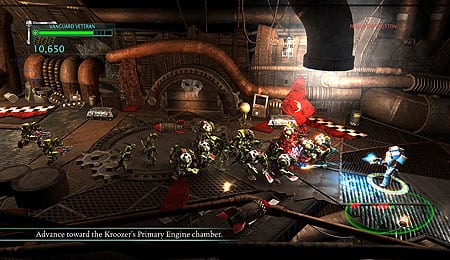 Kill ’em all, let the Emperor sort ’em out.

Back in April, THQ released Red Faction: Battlegrounds as a downloadable title in advance of Red Faction: Armageddon. It was an interesting ploy that was undermined by Battlegrounds’ shoddy reception. Now it’s retrying that tactic with the arrival of Warhammer 40,000: Kill Team, which offers up intense action and the added carrot of an exclusive in-game unlock for the upcoming Warhammer 40,000: Space Marine. This time, THQ hits the mark.

Twin-stick shooter fans should feel right at home with the standard “left moves, right shoots” configuration. Melee attacks account for the only regular use of the face buttons, and in a bit of an odd move, the right trigger is left unused while the right bumper tosses grenades. Sprinting with the left trigger and unleashing your character’s special move with the left bumper round out the setup. There is no camera manipulation, which can be troublesome at times, but it’s mostly well done.

With the entirety of Kill Team taking place aboard an invading spacecraft there isn’t a lot of room for variety, though what’s presented looks pretty sharp. Soldiers wear bulky armour and wield oversized weapons as they eliminate hundreds of enemies per level, all without a dip in the frame rate. The game, while largely presented from an overhead view, does switch perspectives throughout to diversify the combat.

However, while switching does help keep things from getting stale, it also creates a handful of problems along the way. Most notable is that the camera will sometimes rotate and push enemies off screen where they continue to fire at you. Plus, like other games that throw swarms of foes at you, it can be difficult to tell if you’ve killed them all or not. The inability to skip cut scenes is also annoying.

The audio employs basic background music and quality sound effects and does a nice job of accompanying without ever overpowering. There’s also some limited voice work, which comes off quite well as the voice is very official sounding and fits with the dual role of commander/narrator.

A ship loaded with “green skins” is headed toward Forge World, and it’s up to you as a member of an elite squad of Space Marines to stop these Orks from reaching their destination and gaining traction for an upcoming full-scale invasion. There’s no additional plot, but it does enough to set the stage for you to take down this vessel from the inside.

Before each mission you’re given four Space Marines to choose from, each with unique strengths and weaknesses as well as special abilities. There are designated ranged (Sternguard Veteran) and melee classes (Vanguard Veteran) along with two more balanced soldiers (Techmarine and Librarian) on offer, and your selection will alter the way you progress through levels.

Every soldier is outfitted with one ranged and one melee weapon with additional ordinance becoming available as you rack up points. You’ll also unlock supplemental skills, such as increased health, extra grenade slots or faster recharge time on your special abilities. You can only equip two at a time, though, so you’ll need to tailor it to your style of play.

In terms of the action, Warhammer 40,000: Kill Team is part twin-stick shooter, part hack n’ slash romp. The game is all about posting high scores, and to do that you’ll need to kill enemies in bunches, allowing your multiplier to build up. Helping you in that endeavor is a series of power ups found along the way. Each power up is timed — picking up a health boost will put you in a regenerative state rather than just restoring your health — and they cannot stack, so intelligent use of these power ups is often critical to successfully navigating the game’s more challenging areas.

Each level is an objective-driven, linear affair. You’ll be instructed where to go and in what order, and after you finish the appointed task you’ll be presented with another one until the level ends. However, what it lacks in autonomy it makes up for in intense carnage with body counts eclipsing the 1,000 mark in some levels.

There are only five missions in the campaign, which can be completed solo in around three hours or so depending on your skill level. There’s also local co-op. I played through the campaign both ways and it’s a more enjoyable game with a partner. That being said, there’s no real punishment for dying, and as a result it’s too easy. It’s actually somewhat odd that the game gives you a brief window to revive your partner when you can let them die and watch them respawn next to you about five seconds later.

One of the real drawbacks of Kill Team is that there is no online co-op, so unless you’ve got a buddy on your couch you’ll have to go it alone. As a solo experience, the game is unquestionably much tougher, but not necessarily in the right ways as there are isolated sections that appear designed with a second player in mind. For example, one section requires you to destroy machinery while gun-toting Orks spawn ad infinitum from adjacent doorways. With a teammate, one fights off the Orks while the other cuts down the machine. Alone, it becomes frustrating.

Even with the difficulty spikes, though, it’s still a short ride. Completing missions unlocks a secondary mode where a pre-determined Space Marine must hold a spot as long as he can against endless waves of enemies. The five survival challenges are fine, but it’s difficult to last more than four or five minutes so it’s unlikely to hold up over the long haul.

Although it’s a bit lean in some areas, Warhammer 40,000: Kill Team still comes out ahead thanks to some surprisingly addictive gameplay.

By Herija Green
This entry was posted on Monday, July 18th, 2011 at 9:48 am and is filed under Herija Green, Video Game Reviews. You can follow any responses to this entry through the RSS 2.0 feed. You can leave a response, or trackback from your own site.