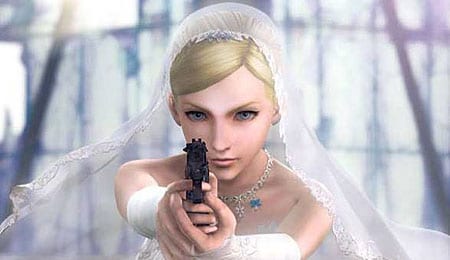 Aya is not amused by the comment about her wearing white.

It’s been over a decade since I played Parasite Eve on the PlayStation, but I thought enough of the original to have my interest piqued when I learned that Square-Enix’s The 3rd Birthday would serve as the third entry in the series (and first new release since 2000). Playing the previous installments isn’t necessary to enjoy this one, though, as The 3rd Birthday offers up a contained story that features different gameplay from the other two.

Given the inherent limitations of the PlayStation Portable, The 3rd Birthday does a pretty commendable job of creating a user-friendly third-person shooter experience. You move with the analog stick and have access to a dive (X) to evade your foes. Aiming is primarily done automatically as holding down the left bumper locks onto an enemy — you can then cycle through available targets with the d-pad — while the right bumper fires. Grenades are also available with the circle button.

Where the game struggles is when trying to create distance from enemies as it’s basically impossible to run and manipulate the camera (done via the d-pad) simultaneously. The workaround is to flee, and then press the left bumper to quickly lock onto a foe, adjusting your view in the process. It’s imprecise, though, as it causes you to come to a complete stop. Manually aiming weapons like the grenade launcher and sniper rifle is painfully slow, and it demonstrates just how dependent the game is on the auto-aiming system.

Without question this is one of the best looking games on the PlayStation Portable. The cinematic sequences look as good as anything you’ve seen on the PS2, and the over-the-shoulder view of the action allows you to take in all the crisp detail work developer HexaDrive has poured into it. Enemies look suitably creepy, and the game’s boss battles are unfailingly memorable. Aya’s clothes even become tattered as you absorb damage.

If there’s one concession to be made it’s that, outside of the largely open boss fights, the levels are essentially a series of narrow pathways regardless of whether they’re set inside of a large night club or on the streets of Manhattan. When the overall presentation is as gorgeous as it is in The 3rd Birthday, though, it’s an easily forgivable offence.

While solid, the audio component doesn’t match the game’s visuals. The voice acting is serviceable for the most part even if some characters are saddled with uninspired dialogue. Sound effects such as gunfire and explosions are well done, but the soundtrack is eminently forgettable. Given Square-Enix’s long-standing excellence in that domain it’s something of a letdown.

The 3rd Birthday opens with a bang when a serene Christmas Eve in Manhattan is shattered by the emergence of bizarre creatures known collectively as the “Babel.” In addition to their destructive abilities, they’re also able to transform human beings into abominations called “Twisted.” In response, an agency called the “Counter Twisted Investigation” (CTI) is formed to deal with the hostile threat.

You play as Aya Brea, a member of this team that possesses the unique ability to transfer her soul into the bodies of others. The process is called “overdiving,” and in an effort to change the present the CTI team has constructed a machine that allows Aya to travel back in time. Once there she can jump from body to body, changing the outcome of past incidents and thus altering the future. As the story progresses it becomes a bit convoluted, but Aya is a strong central character, and that alone helps keep the player engaged.

By far the most interesting gameplay dynamic at work in The 3rd Birthday is Aya’s overdive ability. It took me a while to become adept at utilizing that skill, but once you master it the combat opens up considerably and reveals a hidden level of depth. Plus, as the enemies converge on you almost without fail it becomes a very fast-paced affair as you zoom from one host to another, unloading clips of ammo and dodging projectile attacks. Pepper an enemy with enough rounds and a triangle will appear on them, allowing you to overdive into your foe for massive damage. It’s very cool.

Cover is also readily available throughout, but the game gets bogged down when it becomes necessary to use it. It’s not just the pacing that suffers, either, as a couple of annoying issues pop up. First is that if you fire from cover and exhaust a clip you remain standing while you automatically reload, leaving you exposed. Along those same lines, A.I. teammates will sometimes take cover behind the same object as you and literally knock you out of the spot to take damage.

Outside of the cover problems (and relatively minor control issues detailed earlier), the combat here is really a lot of fun. You’ll have access to four guns at all times, three of which you carry yourself and one that is unique to the host. This becomes critical later in the game when only certain characters have the weapon you need to damage a particular foe. Beyond the unique weapon, each host also possesses their own health meter as opposed to Aya’s health following her from body to body.

In addition to the action-heavy gameplay, The 3rd Birthday also contains RPG elements that allow for customization and encourage multiple playthroughs to unlock items. For example, there are numerous guns of each weapon type available for purchase, and once you’ve bought one you can scoop up various add-ons to do things like improve accuracy or increase clip size.

Aya also has a 3×3 grid of cells that govern her passive abilities. Using chips acquired throughout the missions, Aya can gain and manage different skills that will help her in battle. Stacking the chips on top of one another usually just increases their potency, but there are times cells will mutate to open brand new abilities, sometimes even negative ones. It’s a fairly streamlined system, but it does require careful planning since you’ve only got nine squares to work with and re-formatting a grid completely destroys all your previous upgrades.

All told, it took around eight hours for me to complete The 3rd Birthday, and at that time I had unlocked only a small fraction of the available items. This game was made to be played through more than once with multiple difficulty settings, optional objectives (called “Feats”), collectibles and lots more.

If you’re a fan of third-person shooters and are looking for something to keep your PSP busy for the next couple months The 3rd Birthday is not to be missed. It’s a great looking game, and as long as you embrace the overdive combat system it holds massive replay value, too.

By Herija Green
This entry was posted on Thursday, June 2nd, 2011 at 11:19 am and is filed under Herija Green, Video Game Reviews. You can follow any responses to this entry through the RSS 2.0 feed. You can skip to the end and leave a response. Pinging is currently not allowed.