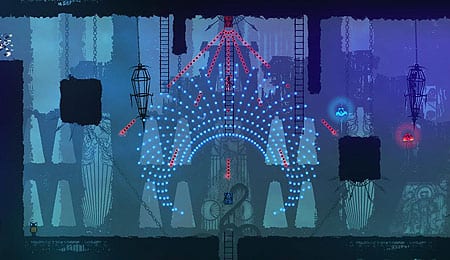 To survive this projectile madness, you will have to figure out the pattern.

Back in the good old days of classic video games, 2D platformers were considered one of the most popular genres. It is interesting to see how this particular genre has started to slow down as game studios shift their focus onto other realms of gaming. Nowadays, players are bombarded with first-person shooters, 3D platformers, or even games heavy on cinematics.

Despite this trend, developer Housemarque is bringing back the 2D platformer in style. Outland, a new title for both Xbox Live and PlayStation Network, breathes life into the classic genre with a hint of uniqueness that remains unforgettable.

Rest assured, Outland is easy to pick up and get into because of its controls, which remain true to a typical 2D platformer. At first glance, the control scheme may seem overwhelming, but overcoming this learning curve requires very little time and effort.

Although the game does make use of the majority of the face, shoulder and trigger buttons, the tutorial does a remarkable job in gradually getting players used to the button layout with its on-screen instructions. Even the commands to perform certain moves quickly become second nature, thereby diverting the players’ attention away from the controls and toward the treasures this game has to offer.

Making use of silhouettes with glowing tribal patterns, Outland has a visual presentation rarely seen in most games. The stunning background is composed of shadow images that vary in degree of opaqueness. Its artistic style and innovative design will have you staring at your screen with awe.

Smooth animations also contribute to the striking appearance that brings pleasure to the sights. Adding to the beauty are the solid, vibrant colours that radiate from the subtle features on the creatures and certain platforms. The arrangements and patterns of the projectiles create glowing trails that add to the gorgeous scenery.

With the soothing tunes playing in the background, it’s very difficult not to be captivated by such an experience. Outland’s use of tribal, new age music is not only appropriate for setting the environment, it demands to be appreciated. Without dominating or adding annoyance to the gameplay, the audio plays a significant part to the game’s exceptionally brilliant atmosphere.

Forces of light and darkness are in constant cycles of creation and destruction. It is during this destruction period that a hero’s soul is awakened within an individual, who will ultimately save the world from darkness. This is where Outland begins as your hero must gradually acquire new skills and magical abilities while battling large spiders, exploding creatures and plants that fire projectiles.

Once your hero is able to shift between light and darkness, or rather blue- and red-coloured polarity, the excitement commences. You will have to constantly switch between the colours depending on the obstacles and situations you encounter. For instance, some of the platforms or walls will only be accessible when you are in the correct polarity. In other cases, if you try to pass through a red obstacle while being red, you take further damage.

Switching between colours is also necessary when dealing with enemies. By changing to the same colour as their projectiles, you protect yourself from any damages. But in order to destroy certain beasts, you must be at the opposite polarity. There are also bosses that require you to switch between colours in order to counter their attacks while waiting for the opportunity to strike their weak points. The key to reigning victorious is to figure out the patterns and frequency of the projectiles’ movements.

A welcome feature to this title is the co-op mode. While you and your partner are not confined to the same screen, it may be a good idea to stick close together since you can revive each other if one of you dies. Not only do two players get to explore and work together in the same levels, they also have access to exclusive co-op challenges. Do note that it can be difficult to distinguish between you and your partner — the only difference being a glow that surrounds you — when you’re close together. However, looking past this issue, it was enjoyable to engage in a battle against a common enemy with a friend.

Outland is filled with plenty of fun battles, puzzles and hidden areas to uncover. Toward the end, the game does get significantly more difficult, but the checkpoints help maintain your enjoyment level. Not only will Outland keep you focused and entertained, it will have you revisiting the completed levels with enthusiasm as you try to reach previously inaccessible areas and unravel more secrets.

Outland is absolutely worth getting, especially for the asking price of 800 MS Points (US$9.99), which makes it a steal! Expect an enchanting experience filled with beautiful imagery, soothing music and engaging gameplay from this particular title.

By Uma Smith
This entry was posted on Friday, April 29th, 2011 at 2:06 pm and is filed under Uma Smith, Video Game Reviews. You can follow any responses to this entry through the RSS 2.0 feed. You can skip to the end and leave a response. Pinging is currently not allowed.