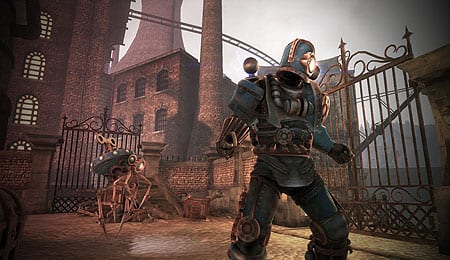 The robots of Clockwork Island are on par with the toughest balverines.

When reviewing last November’s Understone Quest Pack, the first add-on for Lionhead Studios’ Fable III, I closed by writing that some gamers “may prefer to wait for a longer, more challenging opportunity to revisit the world of Fable III.”  Well, take heed would-be rulers of Albion, the time has arrived.

Released on March 1 at a cost of 560 points (US$7), Traitor’s Keep is a much more robust offering of downloadable content. It offers up three rather large new areas to explore along with an interesting extension of the original narrative, set after the events of the main game. More than that, though, what Traitor’s Keep really brings to the table is something that was missing throughout most of Fable III — challenging battles.

The new add-on wastes no time in getting things moving as it opens with an assassin infiltrating your castle and making an attempt on your life. After besting your would-be killer you learn that he had recently escaped from Ravenscar Keep, an island prison housing dangerous criminals and psychopaths aplenty.

Informed that one man in particular had dispatched the assassin, you board a ship intent on meeting him face-to-face. Of course, nothing is ever easy, and you arrive to find a jailbreak in progress. After you and the warden, Commander Milton, put down the insurrection you learn that three of the Keep’s most notorious inmates have vanished, including the man you came to see.

With these nefarious fiends apparently scattered to the wind, it falls upon you and Milton to hunt them down. What follows is one of the more interesting sections of any Fable game I’ve played as you travel to distinct new locations (Clockwork Island and Godwin Estate) while the enormity of this unseen mastermind’s plan slowly comes into focus. It’s extremely well told and brings the always enjoyable moral dilemmas back for another go.

Along the way you’ll encounter some entirely new enemies, variations of existing ones and a few memorable boss battles as well. What sets these apart from the vast majority of fights in Fable III is that you’ll actually need to rely on some strategy to succeed, and even then you’re in legitimate danger of being knocked out — my monarch even endured his first scar. Having my skills tested was a welcome change, one that series veterans should appreciate.

Beyond the strong primary quest and expansive new areas, Traitor’s Keep also includes a number of enjoyable side quests, several new items of clothing and a potion that turns your faithful companion into a robotic pooch. In addition, achievement buffs will be pleased to know that the DLC packs 10 new achievements for a total of 250 Gamerscore.

There’s little doubt that Traitor’s Keep surpasses all previous Fable II and III add-ons thanks to some uncharacteristically challenging combat and a very strong narrative. It provides a good amount of content for the price and is a sound investment for anyone still interested in ruling Albion.