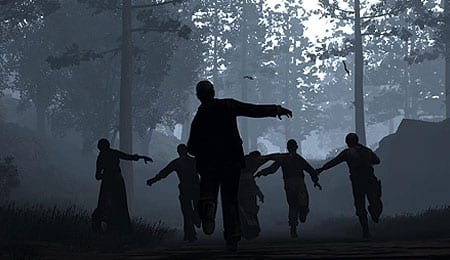 Once the undead start running it gets tough to put them down cleanly.

As Rockstar proved with Grand Theft Auto IV add-ons Lost and Damned and The Ballad of Gay Tony, it’s got this downloadable content thing down pat. Last month, Rockstar bundled together all of its DLC for Red Dead Redemption, headlined by the zombiefied western Undead Nightmare. So is it a worthy successor to its GTA IV efforts? Or does it fall short of Rockstar’s lofty standards?

While Undead Nightmare retains RDR’s setup, the undersized targeting reticule becomes an issue this time around. That’s because the “auto aim” feature still directs you to centre mass on your intended target, which — while fine for killing banditos — is insufficient to eradicate the undead. I found it pretty tough to register headshots when zombies were moving in anything but a straight line at me and, as a result, spent much of my combat time in Dead Eye.

The world of Red Dead Redemption returns in all its splendor with a fresh coat of “hell on Earth” applied in the form of burning buildings, undead animals and, of course, lots of zombies. Even with a whole gang of walking corpses on your tail, the game kept its frame rate solid and there’s plenty of extra bloodshed to give things a “horror movie” feel.

All of the voices from the original game return to deliver sharply written dialogue with the same quality that made RDR such a juggernaut in that department. Rockstar added some new musical tracks to great effect, helping to re-enforce Undead Nightmare’s creepy mood. The screams and moans of the zombies are also fairly creepy.

Set some time after John Marston’s debt to society had been paid, Undead Nightmare takes the ultra realistic setting of RDR and turns it on its head with a campy tale of a zombie outbreak sweeping across the frontier. The expansion hits the ground running as your wife and son become infected during the opening moments, leaving Mr. Marston to set things right.

What’s so impressive about this add-on is that at no point does it feel rushed. Instead you’re treated to a fully fleshed out story complete with excellent cut scenes that reintroduce you to most of the characters you dealt with during Red Dead Redemption. If you enjoyed the original story (and I know I did) you’re sure to get a kick out of experiencing new interactions with the likes of gunslinger Landon Ricketts and traveling salesman Nigel West Dickens.

Of course, all those storytelling elements are just a prelude to killing zombies, which proves to be a blast in spite of my issue targeting their heads. Nearly all of your favourite weapons from RDR are back along with a couple new ones — including a blunderbuss that obliterates the undead using their own body parts as ammunition — that help turn killing the nasty buggers into an art form. New animations have been added as well, allowing you to blow off heads at close range.

Like all zombie games, Undead Nightmare has a variety of undead to choose from, including the obligatory fat ones that charge at you (and can knock you off your feet) and ones that spit venom from range and then explode after being beheaded. By far the toughest, though, is a zombie that scurries on all fours across the ground. They close ground quickly and keep their head low, making it tough to eliminate one without enabling Dead Eye.

Rockstar’s formula of mixing a main story with side missions is present along with a bevy of challenges to fulfill, towns to rescue, graveyards to clear and much more. In keeping with the theme, several mythical creatures have been added, including Sasquatch, the four horses of the Apocalypse and even a unicorn that you can ride. In short, there’s a ton to see and do.

There are a couple notable changes from the main game worth mentioning. First is that camping (and by extension, fast traveling) has been removed completely as I guess a world crawling with zombies isn’t conducive to a lustful night’s sleep out on the open range. You can still fast travel from one safe town to another, but you’ll be spending a lot of time on horseback regardless. There’s also no money, which means scrounging for ammo by looting the undead (or even the living) and opening chests located in the towns becomes necessary to survive.

All told you can expect to spend around five or six hours traversing the game’s plotline, though you can add a few hours on top of that if you’re planning to find all the mythical creatures and complete the game’s many challenges. A word of warning: the end of Undead Nightmare does contain a spoiler for Red Dead Redemption itself so I’d recommend finishing the main game before tackling the add-on.

On top of the single-player expansion, multi-player also gets some love with the addition of two brand new modes: Land Grab and Undead Overrun. The former takes place in the game’s Free Roam section and has you trying to secure various locations on the map. The latter is Rockstar’s take on the ever popular Horde/Firefight mode where you’ll hold off endless waves of zombies as long as you can. It may not be quite as polished as Gears of War or Halo: Reach’s version, but it’s still solid.

Those investing in the Undead Nightmare retail disc will also gain access to all the previously released DLC — Outlaws to the End, Legends and Killers, and Liars and Cheats — which includes co-operative missions, added multi-player modes and locations, more selectable characters and new weapons. The disc is a standalone product, meaning you don’t need to own Red Dead Redemption to have access to Free Roam or play any of the post-release content.

With so much mediocre DLC flooding the gaming community, efforts like Undead Nightmare really stand out. Whether you’re downloading the add-on or investing in the disc, you’re getting a ton of great content for a bargain bin price.

By HC Green
Tags: Grand Theft Auto IV, Rockstar
This entry was posted on Tuesday, December 21st, 2010 at 11:28 am and is filed under Herija Green, Video Game Reviews. You can follow any responses to this entry through the RSS 2.0 feed. Both comments and pings are currently closed.