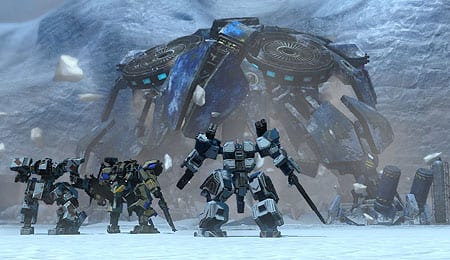 The detail work on the mechs is one of the game’s high points graphically.

The Front Mission series and I go way back, to the point that I used to import the turn-based strategy titles from Japan even though I couldn’t read the language. Despite my love for Front Mission, it has never gained traction in the United States. In an effort to change that, Square Enix has turned the reins over to developer Double Helix and tasked it with transforming a strategy RPG into a straightforward third-person shooter along the lines of MechAssault. The results are decidedly mixed.

Although there are a handful of sequences where you’ll battle on foot, the majority of your time is spent in a Wanzer, the name of the giant mechanized robots. Your mech is extremely ponderous in its basic state and to counteract that you’ll constantly be “skating,” which is where your leg thrusters engage and allow quicker movements. Unfortunately, your mech only has a limited burst, and once your meter is drained you’ll need to wait for it to refill before engaging it again. During this time you’ll slowly lumber around as an easy target for nearby enemies, which can be frustrating. I also didn’t care for clicking the left stick to engage skate mode, especially when the “B” button is used sparingly.

Aiming and shooting fare better as your Wanzer can be equipped with up to four weapons at once with a highly intuitive control setup — shoulder mounted launchers are fired with the (you guessed it) shoulder buttons while the triggers allow for dual wielding of guns and melee weapons.

I’ve long considered Square Enix to be one of the standard bearers when it comes to pushing the envelope with cutting edge graphics. However, Front Mission Evolved doesn’t live up to that reputation. The levels aren’t bad looking, but they’re largely uninteresting and lifeless with some objects being destructible and others not. That leads to odd situations where cars and lamp posts burst into flames on contact with your mech, and yet a hail of missiles smashing into a building will leave nary a trace. The game also seemed to struggle with capturing the scale of what are supposed to be massive robots, the result being that many objects around you look like toys.

Where Front Mission Evolved does succeed graphically is with the mechs. These hulking machines have a good amount of detail and interact with one another like the heavy hitters they are. Weapon fire looks very good, as do the tracing smoke trails of salvo after salvo of homing rockets. Even when the screen is loaded with weapon fire the frame rate keeps up, and that’s without even downloading the game to my hard drive.

Two words pretty much sum up the voice acting: not good. There are quite a few cut scenes during this game, but the characters never resonate, and much of that can be laid at the feet of the often painfully hokey dialogue and lifeless delivery of lines. Among the best (read: worst) moments was when an Australian Wanzer pilot actually yells out, “Crikey!” Outside of the voice work, the game packs a respectable punch with its ground shaking sound effects and soundtrack.

It’s the year 2171 and countries as you know them now have ceased to exist. In their place is a series of global factions and alliances with initials like U.C.S. (that’s us) and O.C.U. (their rivals). You play as Dr. Dylan Ramsey, an engineer testing a prototype Wanzer when a group of unknown enemies attacks New York to destroy the orbital elevator located there. This assault puts your father, who works for the government, in direct peril. You charge in after him, but naturally things don’t exactly go according to plan on your rescue mission, leading to your impromptu recruitment into the military.

That back story launches you into the meat of the campaign mode, which spans five acts as you attempt to unravel the fate of your father as well as identifying who (or what) is behind the attack. The single-player component checks in at an impressive sounding 17 missions, though the game isn’t particularly long as I cleared it on the highest difficulty setting in less than eight hours.

There’s an undeniable sense of déjà vu throughout the game as well as every mission consists of walking a linear path from one encounter to the next and facing off with an increasingly menacing collection of enemy Wanzers and other mobile artillery. It’s here that the game suffers something of an identity crisis as your mech is not powerful enough to square off with multiple opponents at once, but there’s no true cover system in place to afford any reprieve. The result is that you’ll spend a lot of your time playing hide and seek with your opponents in an attempt to isolate one from the group.

A big reason for that is the complete incompetence of your A.I. teammates, who contribute almost nothing throughout the campaign. At best they’ll draw occasional fire from your enemies, but in most cases the opposition will completely bypass the rest of your squad and target you. It’s almost as if they know the battle will end if you’re destroyed and adjust accordingly.

Those hit-and-run tactics are even more critical for the game’s numerous boss fights, which often have you squaring off against multiple high-powered enemies simultaneously. One battle in particular has you taking on four mechs at once, leaving you to zig-zag around the battleground to avoid their fire while selectively sneaking in a few rounds or missiles and effectively devolving it into a war of attrition. In fact, the bosses are so tough that defeating them even with max ammo is basically impossible. To combat this, the game re-spawns health and ammo packs, which you’ll need to pick up several times in many boss fights.

Front Mission Evolved does take you outside of the mech on a few occasions with some missions taking place on foot. Ultimately, though, these sections just make you want to get back in your Wanzer as they’re uninspired and fairly dull. Conversely, the moments spent as a gunner trying to clear a landing zone for your Wanzer squad are a lot of fun, serving as one of the few moments in the game where you really get to feel like a bad ass.

Customization has long been a big part of Front Mission titles, and that is one thing that hasn’t changed as you’ll be able to do lots of tinkering with your Wanzer. You’ll earn money for every kill and as you progress more items will become available for purchase. This includes armour parts, different types of weapons (long-range, short-range, melee, etc.) and supplementary skills. You’ll have to do some balancing between power and weight — lighter mechs move faster but can’t carry as many weapons, heavy mechs can take more damage but don’t move as quickly, and so on — or you can always just use one of the pre-selected loadouts.

Beyond the campaign mode, there’s also a multiplayer component. It’s a bit light with only four basic modes and five maps, but the real issues are that it’s difficult to find a full game, and then when you do it does a terrible job of balancing teams. Nearly every game I played started with five to six players but was down to three or four by the end, leaving way too much time spent looking for your opponent.

On the upside, the combat online holds up pretty well, and it feels less cheap than when you’re tangling with the computer. There’s also customization allowed online, but nothing you earned during the campaign will carry forward.

Although it’s a far cry from the games I used to import from Japan, Front Mission Evolved is not without its strengths. It provides solid action, and there remains something undeniably cool about piloting a massive robot into battle. If a devoted online community emerges, this game could carve out a niche on Xbox Live and Playstation Network yet.

By Herija Green
This entry was posted on Friday, October 8th, 2010 at 1:12 pm and is filed under Herija Green, Video Game Reviews. You can follow any responses to this entry through the RSS 2.0 feed. You can leave a response, or trackback from your own site.