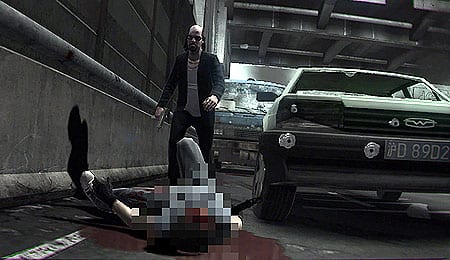 Dog Days leaves some of the more disturbing images to your imagination.

Most video game shooters follow a pretty tight format. You’re an elite, highly-trained soldier in a war against Nazis…or terrorists…or aliens…or some combination therein. Kane & Lynch 2: Dog Days throws all that out the window as developer IO Interactive once again puts you in the psychotic shoes of James Lynch and Adam “Kane” Marcus for a blood-soaked romp through Shanghai. It’s distinctive, hard hitting and unsettling, but is it fun to play? Read on.

At its core, Dog Days is a cover-based third-person shooter, which makes the ability to cross open ground quickly and get back into a concealed position extremely important. Unfortunately, the game clutters that action by assigning the entering cover and mantling commands to the (A) button and sprinting to the left bumper. Given the A.I.’s sniper-like accuracy and your own limited ability to absorb bullets, it can make closing the distance between you and your enemies problematic.

Some may find gun accuracy to be an issue as well, though that was clearly a design decision to simulate more realism with the weapons as well as the characters’ lack of special training. After struggling initially I came to embrace the aiming. Also of interest, there’s no melee attack for close quarters combat — instead, pressing (B) has you grab an enemy and use him as a human shield.

While not the most visually impressive game I’ve seen this year, Dog Days manages to stand out by offering up a gritty, grainy and wholly unpleasant look at the seedy underbelly of Shanghai. The entire game is shown as though it’s being filmed via a shaky handheld camera with grainy filters to give everything a very raw styling. Kill someone in a particularly brutal manner and the game even breaks out the mosaic censorship. Such a unique look won’t be for everyone, but I loved it.

Where the game does suffer some missteps visually is in the character models. Even in the cut scenes, Kane and Lynch look outdated and blocky, and during actual gameplay it gets worse. There’s also a disturbing lack of enemy variety. For a game that sends as many waves of foes at you as Dog Days it becomes more a prominent issue, and you’ll feel like you’re killing the exact same handful of cops and thugs over and over again.

Like the environments, the sound differentiates itself by being unrefined and powerful. I honestly can’t remember a title that lent more authentic intensity to its weapons. A low caliber pistol pops while a pump-action shotgun thunders through your speakers — it’s definitely one of those games where you’ll want to crank up the volume. Music and voice acting are solid, highlighted by the rage-filled and profane exchanges between the main characters.

If director Michael Mann were to make a video game it’d probably look something like Kane & Lynch 2: Dog Days. All throughout the game I was having flashbacks to films like Heat and Collateral where crime is made to look almost primal. And you aren’t some poor victim forced into this felonious life out of desperation. You’re a hardened killer, a psychopath and an all-around scumbag.

The story opens with Kane meeting Lynch in Shanghai. The two are reuniting for one last job, but first Lynch has a little business to take care of. Things go terribly wrong, and the resulting fallout brings the wrath of seemingly all of China down on our two anti-heroes. Even though it’s not terribly original, it’s powerfully told and preys on legitimate human emotions, most notably anger and revenge. It also pulls no punches and can be legitimately disturbing at times.

Some will undoubtedly dwell on the game’s short length — Dog Days can be completed in five hours or less — but given its cinematic nature, the intensity of the fights and lack of down time, it’s hard to argue it should’ve been any longer. The game is completely linear, constantly pushing you forward from one cover-based gunfight to the next. There are no hidden items to collect. No moral dilemmas to ponder. No disparate endings to see. You fight, you kill, you repeat.

Given that nearly all of your time will be spent trading bullets, the game’s structural flaws are naturally magnified. The biggest of which is the uneven cover system. At times your enemies wantonly ignore the fact that you’re in cover, wounding you from seemingly impossible angles. In fact, it appears that everyone involved with the Shanghai police and underworld are highly trained marksmen as they consistently exploit even the smallest opening from great distances. It’s annoying on the lower difficulty settings and deadly on the higher ones.

The toughness of your enemies is another annoyance. It’s not uncommon to pump multiple rounds into a run-of-the-mill beat cop only to watch him shrug it off and keep firing. Head shots are still instant kills but, as previously noted, the game’s shooting mechanics make collecting them an inexact science at best. If you were weaned on the Modern Warfare 2-type games of the world, the imprecise aiming in Dog Days (exacerbated by the A.I.’s own sharpshooting prowess) may frustrate you.

Although the A.I. is a crack shot, there are also instances where it behaves foolishly, particularly during co-op play (now supported both locally and online). The main problem comes when prioritizing targets. It seems the computer is fixated on gunning down Lynch, which is who you control for almost all of the single-player story, and will even fire on him in cover while Kane is standing right next to them. It doesn’t happen that often, but it looks bizarre when it does.

Outside of the story, Dog Days also includes online multiplayer and Arcade mode. Multiplayer has just three modes: Cops and Robbers, Fragile Alliance and Undercover Cop. Fragile Alliance casts gamers as criminals on a heist and gives them four minutes to grab the money and shoot their way out with the loot. It encourages teamwork while giving the option of betrayal as you can become a traitor and try to escape with all the money. Undercover Cop is identical except that one player is randomly made a cop, whose job it is to stop the heist from the inside. Cops and Robbers pits two teams against one another where the goal is once again to escape with the loot. Arcade Mode is identical to Fragile Alliance except that it can be played offline and your human teammates are replaced with bots.

Although the multiplayer modes don’t live up to their conceptual promise — blame trying to turn cover-based shooting mechanics into a run-and-gun scenario — they can be fun if you’ve got people that want to play the right way (i.e., no immediate betrayals). Even then, however, it still feels like the police are at a significant disadvantage, as criminals seem to absorb incredible amounts of punishment during the Fragile Alliance and Undercover Cop modes. I’ve also had a significant number of online games end via a lost connection to the host.

I can say with absolute certainty that Kane & Lynch 2: Dog Days won’t appeal to everyone. Some will be turned off by the visuals, others by the short and largely repetitive campaign. However, those looking for an adult-themed shooter that breaks out of the Modern Warfare mold should give this one a try. Despite its brevity, Dog Days is one game that will definitely stick with you after you’ve finished.

By Herija Green
This entry was posted on Saturday, August 21st, 2010 at 1:14 pm and is filed under Herija Green, Video Game Reviews. You can follow any responses to this entry through the RSS 2.0 feed. You can skip to the end and leave a response. Pinging is currently not allowed.