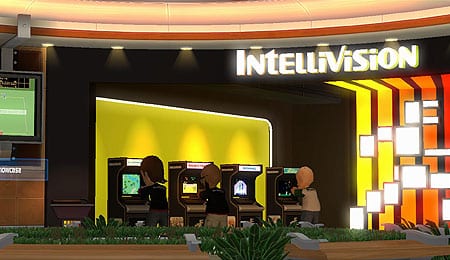 The three-story virtual arcade looks cool, but not being able to walk around it isn’t.

The last of four titles making up the Xbox Live Arcade’s Block Party, Game Room isn’t actually a game in and of itself. Instead it’s a customizable virtual arcade that allows you to create your own experience by applying various themes, decorations and, of course, plenty of classic arcade games.

There are currently 31 titles available for download with Microsoft boasting that it has 1,000 games lined up for future installments, which will be released every week starting in late April. Each game can be demoed once for free — you get 10 minutes to test it out — and then purchased for either 240 points (US$3), if you only want to play it on your Xbox 360 or PC, or 400 points (US$5) if you want it available for both.

Gamers also have the option to play a single round of any game for 40 points (US$.50), which is a nod to the olden days of plugging quarters into a machine, or by using the tokens earned from having friends visit your arcade. You’re given 20 tokens to begin with, but games cost five tokens per play so it’s only worth four credits.

Decorating your arcade can be fun, though many of the cooler items will only unlock as you level up, which is done by earning medals in the games themselves. Others, such as mascots, can be purchased for a nominal fee. You can also earn plenty of achievements along the way as Game Room offers a robust 1,000 points for those willing to invest enough time (and money) into the service.

As you would expect, the games are dead ringers for their arcade counterparts, and the cabinets look spot on. Each game comes packed with challenges for things like points and completion time along with online leaderboards to match your skills against those of your buddies. You can even challenge your friends directly.

While it does have some undeniable charm, one disappointing aspect of Game Room is that you’re currently unable to have your avatar walk around the arcade. Instead you’re limited to a handful of stationary camera angles, which isn’t nearly as cool as exploring the rooms for yourself. Hopefully this ability will be added in the future as it really feels like a significant omission.

Although it’s loaded with potential, Game Room’s long-term viability will ultimately be determined by the games Microsoft offers. There are a ton of classic arcade games that haven’t found their way to XBLA, PSN or Nintendo’s Virtual Console, and if Microsoft can tap into that pipeline this could become a really cool addition to Xbox Live.

By HC Green
This entry was posted on Saturday, April 3rd, 2010 at 5:40 pm and is filed under Herija Green, Video Game Reviews. You can follow any responses to this entry through the RSS 2.0 feed. You can skip to the end and leave a response. Pinging is currently not allowed.