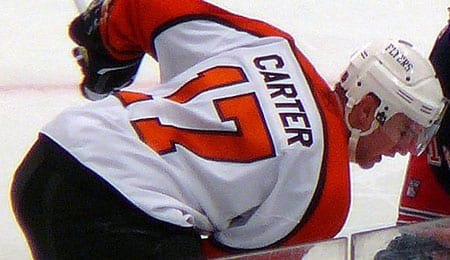 Jeff Carter’s injury might be crippling for your Fantasy team, but here’s some advice on how to deal with it.

Sometimes injuries just happen at the worst possible time or you happen to find about them on a Monday of a very important semifinal week. For example, it was announced Monday that Jeff Carter (broken foot) is out 3-to-4 weeks. This sent many running to the waiver wire for maybe some sort of replacement or just a player that could help a little bit. I am going to explain this in terms that will help everyone out here. At this point in the season, there are very few, if any, quick fixes out there.

As much as we can try to help you out here with The Wire Troll, there comes a time when you just have to scramble around and look. As we wind down the last few weeks, we regret to inform you that soon you will see those evil Year End award type posts from us and we apologize. The best thing that I have learned from doing this column all season is all the players that actually worked and the several dozen that did not quite pan out so much. Again, there is the standard “my bad” that can be used.

Well this is the one time of year that an injury can truly be fatal. Please note the key word in all of this is “can.” No one said that this is etched in stone and that your team would be headed for certain doom. This is not like the case if Marian Gaborik had gone down for the year in Game 10. Think of this as a way to be thankful that you are still alive in your winner’s bracket. We have two quick ones for you that could help this week.

David Clarkson, RW, New Jersey Devils: Do not laugh. People forget that Carter has been a disappointment for the last month or so. Meanwhile, Clarkson has 20 points in 35 games and has a work ethic that is very underrated. If you are desperate for points, Clarky may be your guy. With games against the Rangers and Flyers this week, he is the man if you not only want some points but maybe some cheap PIMs as well. Also, Clarkson will see ice time in the range of 15-to-18 minutes potentially. That will not kill the valuable stat known as ATOI (Average Time On Ice). There are worse options out there and he is owned by hardly anyone at all (less than 5 per cent almost across the board). Go out and take a risk if you need a forward. What do you have to lose anyway especially with Milan Michalek maybe gone for the season too?

Blake Wheeler, RW, Boston Bruins: Here is another guy to take a shot on. Wheeler is back from illness and raring to go. He also has some incentive, bonus wise, to reach 20 goals. To that end, he needs three goals in his last 12 games, but more importantly he did inject some life into a Boston team that needed it yesterday. Now, this is rare to go with a guy that has an own rate of well over 50 per cent in all three major Fantasy sites, but surprisingly he is available in a lot of leagues I am in. If Wheeler is out there, why not take a shot on him? He may be just what you need again to stem the tide of injuries that could be ravaging your team.

I hope that helps and of course see you next week with some semis and finals advice for those still scouring waiver wires. Good luck.

By Chris Wassel
This entry was posted on Tuesday, March 23rd, 2010 at 1:52 pm and is filed under Chris Wassel, HOCKEY, The Wire Troll. You can follow any responses to this entry through the RSS 2.0 feed. You can leave a response, or trackback from your own site.