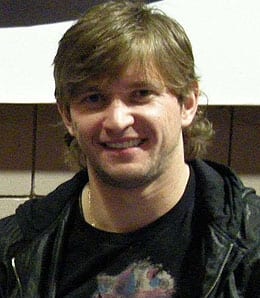 You can bet Denis Grebeshkov wasn’t smiling when he underwent surgery on his balls.

You are now in the final week of your H2H Fantasy league and you are dead straight on the playoff bubble. Your opponent is not only just as active as you, but he also scours that waiver wire every day. Trade deadlines have passed so that option is also not available. Injuries may be mounting for your team as well. Do you have Denis Grebeshkov on your team? Well, he is out for a while after having testicular surgery (ouch). What if you have Mike Cammalleri? Well, he is out at least another week. It seems like you are going through the motions with no end or solution in sight. We take a quirky yet quick look at three players that may surprise this week in The Wire Troll.

Peter Mueller, C/RW, Colorado Avalanche: People will laugh some at this but Mueller fits in with what Colorado is trying to do and that is score more. He does not have to play a ton of D and all he has to do is pile up points like he did in his rookie season in Phoenix. It really is the perfect setting for a guy like Mueller. He is getting second line time and that PT could increase some this week. Those five points in four games so far is definitely a boon to his confidence along with the 15 to 17 minutes of ice time a night he gets now as opposed to being a healthy scratch in Phoenix. Expect more good times ahead for this youngster and get him now. To think Mueller is available in 95 per cent of leagues across the board — sheesh, what are you waiting for, people?

Dustin Byfuglien, LW, Chicago Blackhawks: This guy is playing for his contract, so to speak. Any guy that is this big and can create so much havoc should have a few more points. The middle part of the season was a dire struggle for Byfuglien (pronounced BUFF-len). However, if he ever figures out how to put the puck in the back of the net with putting a lot of shots on said net, then look out. Byfuglien does average nearly 16 minutes a night and when the opponents and games get larger, so does his intensity. Some may not like that, but I do. Especially this week, where for some this is a winner take all scenario. Win and you are in. When you are facing that situation, I want guys like Dustin Byfuglien on my team and not Ryan Whitney (powderpuff), for example.

Tyler Bozak, C, Toronto Maple Leafs: This is the why not of the week for you Fantasy owners. Yes, he is just a rookie, but his 13 points in 20 games screams “hey, take a flier on me.” You know he is going to get minutes (averaging over 18 a night) and is going to get to play on the first and/or second line. Nick Kulemin and Phil Kessel are no pushovers to play with. I particularly enjoy Bozak’s presence on the ice and his exuberance. Add in the ability to pass the puck and an above average wrist shot and you have the makings of a surprise pickup for the next few weeks as the NHL regular season winds down, but he could also be someone that surprises many that you play against in your Fantasy pools. If you have to take a gamble this week, why not take it on Bozak because honestly you could do much worse.

Next week we get you ready for the playoffs with an upside down edition of The Wire Troll. You will really have to see it in order to believe it.

By Chris Wassel
This entry was posted on Tuesday, March 9th, 2010 at 9:06 pm and is filed under Chris Wassel, HOCKEY, The Wire Troll. You can follow any responses to this entry through the RSS 2.0 feed. You can leave a response, or trackback from your own site.