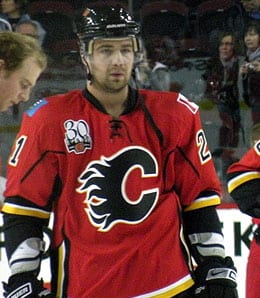 Christopher Higgins has a chance to really benefit from the move to Calgary.

This week the Fantasy Hockey Roundtable was asked “Over the course of 48 hours, the Toronto Maple Leafs, Calgary Flames, Anaheim Ducks and New York Rangers combined to complete three major trades. What player(s) do you think will benefit the most from the transactions? Who do you think was hurt the most due to the moves?”

Representing for RotoRob, I wrote:

I think Christopher Higgins will most benefit from the Calgary series of trades, just because he seemed to be putting himself under so much pressure in New York, perhaps because he was playing so close to home, that he could hardly shoot straight. His time in New York was such a failure, he really has nowhere to go but up.

In terms of players hurt from moves, I’m not sold on Ilya Kovalchuk in New Jersey. I’m not sure how he’ll fit in with their system and I’m not sure how much he’ll appreciate not being the focal point of his team’s offense. And I’m not sure if he’ll struggle with the defensive responsibilities of playing for the Devils. It seems like there are a lot of places where the deal can go south for him. It’s a good thing he’s a rental.

Read the rest of this week’s Roundtable on RotoWorld.

By Steven Ovadia
This entry was posted on Monday, February 8th, 2010 at 11:24 am and is filed under HOCKEY, Roundtable, Steven Ovadia. You can follow any responses to this entry through the RSS 2.0 feed. You can leave a response, or trackback from your own site.