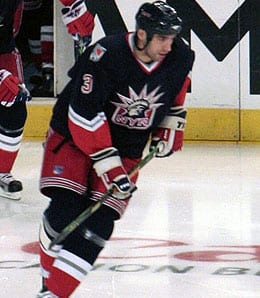 Don’t expect many points, but Michal Rozsival is a fine Fantasy pickup.

There are just four days until Christmas and your Fantasy team is in the crapper. What do you do? I repeat. What do you do? Today, we simplify things and give you three reasons not to totally give up hope on your team. The ideal premise here is the weather and your team may be downright frightful, but there is always hope.

Consider that December 21 is the longest night of the year. After that, it stays lighter for each day for the next six months. That is pretty comforting. Well, at least I think so. It is time to give out these three presents to the masses before the gifts all get wrapped and the holiday is ready to truly roll.

Our Three Gifts This Holiday Season

Michal Rozsival, D, New York Rangers: Look, he is not going to set scoring records on fire, but he is a veteran and is starting to see more Power Play time. Rozsival has played well in his last two games and the Rangers have a schedule that favours a veteran presence on the blue line as opposed to a guy like Michael DelZotto. With the uncertainty that is Wade Redden on the Rangers, you could do much worst at this point with other lesser defensive players and pick Rozsival as a good fourth or fifth defenseman in deeper leagues.

Dan Sexton, RW, Anaheim Ducks: On the surface, seven points in eight games is just okay, but considering that Sexton gets almost 15 minutes of ice time as a rookie speaks volume about to his talent. He is also a +3 on a team littered with minus players. While Sexton’s time on the Power Play may be low, just be patient. He averages over three shots a game and will start hitting the net with regularity, especially if he starts playing with Ryan Getzlaf and Corey Perry again. Even if that does not happen, Sexton has a knack for playing hard and getting to the net. That usually results in goals and assists. He is still only taken in about 2 to 5 per cent of Fantasy leagues. Get on it, people!

Nigel Dawes, RW, Calgary Flames: Dawes is another one of those are you kidding me type guys at first glance. However, take a deeper look and this guy has the makings of breaking out even bigger in the New Year. Of his 10 goals, three are on the Power Play and he constantly works the net and corners hard. That will generally get you ice time with the likes of Jarome Iginla. I hear he is pretty good. The bottom line is Dawes’ 56 shots is very encouraging as he has 29 of those in his last 12 games (almost 2.5 per game). His ATOI is up to 15:35 as well. This is going to turn into another one of those cases where the New York Rangers let a guy get away and he turns into Fantasy gold in time. You would have thought they would have learned their lesson after Marc Savard? I guess not, ladies and gentlemen.

I wanted to humbly wish everyone that reads RotoRob.com and writes for the site a Merry Christmas and a hope that you truly do get everything you wanted under the Christmas tree on Friday. See you next week with some of the best Fantasy impact players from 2009. Stay warm out there!

By Chris Wassel
This entry was posted on Monday, December 21st, 2009 at 5:54 pm and is filed under Chris Wassel, HOCKEY, The Wire Troll. You can follow any responses to this entry through the RSS 2.0 feed. You can leave a response, or trackback from your own site.