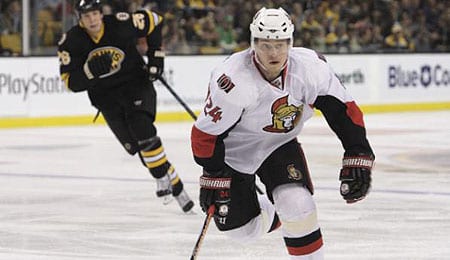 If you don’t want to get bitchslapped in your Fantasy league the way Anton Volchenkov (right) is crushing people, read The Wire Troll.

In the beginning there was nothing and then there was light and there was still nothing, but you could see it. That is right, it may be Week Two of the NHL season for most of you or even Week Three for some, but it’s time for a little Hockey Wire Troll. Basically, you can go fishing for hours or let me do it for you. Most tend to prefer the latter. The less work you have to do now means the less you have to do later when Fantasy crunch time hits.

You do not want to be smashed into the boards like Viktor Hedman was on Thursday just, for example, because you forgot to make some early-season moves. Do note Anton Volchenkov’s hits on the first two picks of the 2009 Draft as seen here and here.

Now let’s get to our picks for the week.

Brendan Morrison, Washington Capitals: What? I have heard this all year from people, but do not laugh. Morrison has six points in seven games for the Caps and has been much healthier than in years past. The knee injuries have gone away and though his shot total is not there yet (just seven so far), you should give it some time. Before the lockout, Morrison was consistently over 50 points; he even had a 71-point season in 2002-03 for Vancouver. There was a wrist injury I forgot about too, but while the health is there, go get him!

Eric Belanger, Minnesota Wild: Belanger is a bit of a role player according to most, but I see serious potential especially with all the injuries in Minnesota. Seven points in five games is serious stuff.  That is nothing to sneeze at at all. Minnesota realizes what it has in Belanger and when the players come back from injury it may be their roles reduced and not his. He is a good pickup in leagues — and not just in deep ones.

Matt Moulson, New York Islanders: Moulson has four points in four games and nearly 20 minutes of ice time per contest (19:41). Sure, it doesn’t hurt that he has seen some first line time, but he has 17 shots on goal already and has a propensity to go to the net as well as bang there. This is something the Isles have sorely missed, last year in particular. I like the fact that he has meshed well with guys like Kyle Okposo, John Tavares and even Doug Weight. Moulson is a guy to definitely watch as the season goes on because even if he plays on the second line, he will not flame out like Aaron Voros did last year. Just do not expect 82 points, that’s all.

David Jones, Colorado Avalanche: I made a joke about this the other day. The Bruins just went into Davy Jones’ locker. Well, they really did after this guy dropped a shortie on them. He is not even on either of Colorado’s top two lines, but has five points in three games. Jones missed the first five games of the regular season with a bruised chest, but has come on like gangbusters. Surprisingly, he’s averaging 17:50 of ice time so far, so the Avs and Joe Sacco are noticing something in this kid. He will be on the top two lines before too long and is someone you must pick up now because he will be gone by early in the week. Demand is that high on him…really!

Tyler Myers, Buffalo Sabres: This pick is a little outside the board I know, but hear me out. Myers is 6-foot-8 and can actually skate pretty well unlike Hal Gill. Myers has two points in four games which does not sound like much, but he is hitting people pretty well. Buffalo finally has some true grit and sandpaper on the blueline. If he keeps on playing 20:46 a game, he will be worth owning on your Fantasy teams, especially if you track blocked shots and hits. Myers’ slap shot is also above average and when he starts uncorking it…look out. I am not saying he is a Zdeno Chara in the making, I am just saying there is potential here. Grab him while you can.

Scott Clemmensen, Florida Panthers: I was skeptical to put his name on here, but it needed to be done. Why? Clearly Tomas Vokoun cannot handle the workload. Florida gives up 38.1 shots per game and Vokoun is already burning out a bit. That is his track record — he cannot play more than a few good games in a row. This is why Clemmensen is perfect. Remember when that Martin Brodeur guy went down in Jersey last year? Clemmensen won 25 games for the Devils and thrust himself into a more prominent place in Fantasy circles only to wind up as the second banana to Vokoun. That will change soon if Vokoun keeps up letting soft goals up like Vesa Toskala. So keep an eye out, Clemmensen may still be available.

Next week, see which position we double up on because it may just be one that you really need help in. Until then, it’s hockey weather and the best time of the year. Bye for now.

By Chris Wassel
Tags: Fantasy Hockey, Wire Troll Hockey Style
This entry was posted on Sunday, October 18th, 2009 at 11:59 am and is filed under Chris Wassel, HOCKEY, The Wire Troll. You can follow any responses to this entry through the RSS 2.0 feed. You can skip to the end and leave a response. Pinging is currently not allowed.