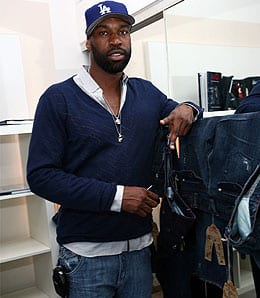 How will B-Diddy do in LA this year?

The 2009-10 RotoRob NBA Draft Kit rages on with yet another team preview.

Clipper Nation went from about 10 to five fans after Donald Sterling once again refused to fire Mike Dunleavy not only during the season, but after they finished a pathetic 19-63 to “commemorate” their 25th anniversary of being the Lakers’ little brother. Prior to the season starting, things were promising. The Clippers made a strong acquisition in Baron “I play when I want” Davis to hopefully boost the chances of re-signing their stud Elton Brand.

But Brand shocked the team when he bolted for Philadelphia, leaving Davis in “I don’t care mode” for the rest of the year. Even worse, in November the Clippers thought taking the one billion dollar contract of Zach Randolph off the hands of the Knicks would help improve their team. It didn’t. But fortunately they rid themselves of him this offseason.

The best thing about this past year for the Clippers was winning the lottery, literally and figuratively, in a weak draft, and earning the rights to Oklahoma star Blake Griffin. While their lineup for next season isn’t looking too bad on paper, you still have to throw in the X factor turd-Mike Dunleavy.

There could potentially be a lot of position battles seeing as how the Clippers are terrible. The biggest battle will most likely be between Kaman and Camby as Griffin is almost a sure thing to slide into the starting power forward role.

Camby and Kaman are both very effective rebounders when healthy, which tends to be a rarity. They both fall quicker than bowling pins. Due to injury, Kaman only played in 31 contests last year, averaging 12 points and eight boards. The mountain man has shown a knack to pull down 20 boards in a game and despite being the ugliest NBA player alive, is a quality performer and could help form a nice three-man rotation with Griffin and Camby.

Last season, Camby played in twice as many games as Kaman, that being 62, and averaged a strong double-double with 10 points and 11 boards per game. He’s always had a knack for being a big blocked shots and rebound guy. If Griffin is the real deal, there is a strong potential for the Clippers to have one of the best rebounding frontcourts in the leagues, as well as a lot of bickering between Kaman and Camby.

Gordon was the only real bright spot on a horrid team last season. He averaged 16 points per game and if given the opportunity could be close to an All-Star player next season (barring Davis not jacking up 20 threes a game and making two of them). The second-year player out of Indiana showed last season that he actually does give a damn and would like to win games and can be a leader on the court even when players such as Davis mope for 48 minutes. Starting at the two guard, expect big things out of Gordon this year.

Believe it or not, I think Griffin will disappoint. This year’s draft was notorious for its lack of depth, so naturally the overall pick has to be a bit weaker too, right? While most might disagree, if you watched Griffin in college it seemed all of his points came from two handed dunks, a la Greg Oden. By the way, how have Oden’s first two years gone with the Blazers? Griffin to me is a lesser version of Dwight Howard, an All-Star albeit, but a player with little offense (however, a terrific rebounder and shot blocker). It just seems that the hopes for the number one overall pick are through the roof and there is room for him to quickly turn Fantasy owners sour when he averages a mere seven points and five boards per game.

Butler could get a solid 20 minutes a game, and put up decent Fantasy reserve numbers. He averaged a nice 10 points per contest last season and could improve his assist and rebound numbers this year. Granted, who knows what the genius Dunleavy will do. Maybe he will bench Butler for two months, and then play him for a week straight.

Griffin is the only rookie on their roster so naturally watch him. After insane numbers in college, I think he will eventually produce in the NBA but not yet. This year will be a learning year so don’t rely on him too much yet on your Fantasy teams.

Will Dunleavy let any of his young stars develop? Or will he continue to jerk around his roster and completely deplete the confidence of all his younger players? The Clippers might be as talented as any of the lower tier Western Conference teams and certainly some of the best rebounders, but whether they can turn that talent into victories in the ’09-10 season is a different story.

By Daniel Olson
This entry was posted on Friday, September 18th, 2009 at 12:45 am and is filed under 2009-10 RotoRob NBA Draft Kit, BASKETBALL, Daniel Olson, Team report. You can follow any responses to this entry through the RSS 2.0 feed. You can leave a response, or trackback from your own site.