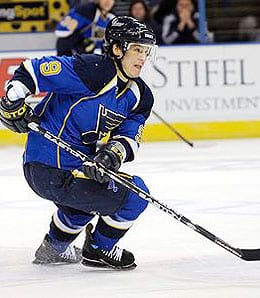 Paul Kariya is on the comeback trail, so don’t overlook him in your playoff draft.

Parity — it’s great for competition, great for keeping teams in the hunt, great for entertaining and meaningful games. But it’s not so great for fantasy.

If you’re doing a fantasy league for the Stanley Cup playoffs, there’s no easy way to go about it. Every series has reasonable arguments for which team will win. Yes, even that Detroit-Columbus matchup offers plenty of reasons why the first-year post-season team can win, and why it wouldn’t necessarily be an upset.

All in all, the closest thing to an easy series is the high-flying Boston Bruins taking on the Montreal Canadiens. The Habs struggled for long stretches this season and it’s a minor miracle they pulled things together. However, if you caught the final game between the Habs and the Bruins, you know the long rivalry between these two could definitely amp things up. In most cases, if you looked strictly at record, injuries, and players, this would be the only cakewalk series to predict. With decades of history to motivate, it won’t be so easy.

Thus, the big question remains: how the hell do you pick a fantasy playoff roster when a seven and eight seeds aren’t necessarily underdogs?

There are two schools of thought with playoff picks. You can either spread your drafting equally around and try to amass all your points in the first two rounds or you can load up on two teams you think will go far. I’m typically in favour of the latter — take a few big names from around the league, then stack the underside of your team with the team you think is going furthest. After all, those role players are what wind up winning fantasy leagues and games played becomes a valuable commodity.

That being said, here are some tips to approaching what will be the tightest first round in recent memory.

2. Watch for miracle comebacks: A lot of people might have missed the news that came out of Columbus about rookie Derrick Brassard, who might be available for the Blue Jackets early in their series against Detroit. Ditto Paul Kariya, though no one out of St. Louis is saying a thing. These types of guys are great late-round fantasy picks as most people have written them off.

3. Avoid goaltending controversies: Anaheim won’t say if it’s starting Jonas Hiller or Jean-Sebastian Giguere. Either way, whoever is in the net will have a short leash. If there’s no clear-cut number one, stay away — you need every game-played you can get.

4. Remember playing styles: Playoff defense becomes notoriously tougher, and NHL refs seem to forget their whistles at home come April. That means lower scoring games and less power plays. Take that into account when picking teams to draw players from; for example, the freewheeling Washington Capitals might not be as run-and-gun against the defense-first New York Rangers.

5. Look for heroes: Remember last year’s playoffs when R.J. Umberger woke up to be one of the best players on the Philly roster? Those second-line talents can rise to the occasion when defenses focus on top-line players. Most of the time, the guys who become playoff heroes are the ones with a reasonable amount of skill and a whole lot of work ethic.

6. Go with your gut: This year’s playoff field is as wide open as ever. There isn’t necessarily a right way or wrong way to do it; if you have a hunch about something and find the stats to back it up, go for it.

By Mike Chen
This entry was posted on Tuesday, April 14th, 2009 at 10:30 pm and is filed under Draft strategy, HOCKEY, Ice Chips, Mike Chen. You can follow any responses to this entry through the RSS 2.0 feed. You can leave a response, or trackback from your own site.