Ice Chips: It’s All Over As It All Begins 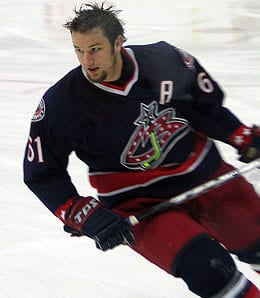 Rick Nash has led the Blue Jackets to the playoffs for the first time ever.

Let’s be honest. If your fantasy team isn’t working, it’s too late. The playoffs start next week. The season is pretty much over. But don’t despair. There’s still plenty to obsess over.

The Columbus Blue Jackets pretty much shocked the world by clinching a playoff spot. There are a couple of reasons. Literally, a couple. Forward Rick Nash, who put up 38 goals and the same number of assists, and rookie goalie Steve Mason, who was brilliant with a .918 save percentage, a 2.22 goals against average and 10 shutouts. Coach Ken Hitchcock’s defense-oriented system certainly helped things, but you can’t pick up coaches in fantasy leagues. Yet.

Columbus will face off against Calgary, who has five losses in its last eight games. Calgary’s leading goal scorer is Michael Cammalleri with 36. Worth noting, though, is that he has none in his last eight. He hasn’t scored since March 23. Cammalleri has picked a pretty bad time to go stone cold.

The Boston Bruins are back in the playoffs with the best record in the Eastern Conference. Interestingly, their leading scorer, Phil Kessel, barely made it past 30 goals, which is something to file away. Winning teams don’t necessarily have crazy fantasy numbers. Although you have to love Marc Savard’s 58 assists and the 50 helpers posted by David Krejci.

The Detroit Red Wings, the number two seed in the Western Conference, is the winning team that proves the exception to the Boston Bruin rule. The Wings have four players with at least 30 goals: Marian Hossa, Johan Franzen, Pavel Datsyuk and Henrik Zetterberg. Of course, despite winning the Stanley Cup last year, I still think of Detroit as a team that has trouble making it out of the first round of the playoffs. So we’ll see how that sick amount of talent up front can compensate for the Wings’ frequently erratic (and under-performing) goaltending. However, if it ends up drawing Anaheim for the playoffs, Detroit should be fine — Anaheim hasn’t beat Detroit in regulation this season.

The New York Rangers squeaked their way into the playoffs, managing to go an entire season without an offensive star emerging. Right now, the closest thing the Rangers have to a pure goal-scorer is Ryan Callahan, who has thrived under new coach John Tortorella. Callahan has three goals and four assists in his last six games. Shockingly, no one on the Rangers has even 25 goals. Their two leading goal-scorers (Nikolai Zherdev and Markus Naslund) have just 23 goals apiece. Watching the Rangers play the Bruins in the playoffs could be the cure for insomnia we’ve been looking for.

For the sixth straight season, the Phoenix Coyotes will be left howling on the sidelines as the postseason party kicks off. But that doesn’t mean the ‘Yotes can’t play some small part in determining how the playoffs shake out. Phoenix’s 4-1 win in San Jose Thursday night prohibited the Sharks from clinching the President’s Trophy for the NHL’s best overall record and the right to home-ice advantage throughout the playoffs. You can thank rookie goalie Al Montoya for leading the way, as he made 40 saves to slam the door on San Jose. This kid has been splendid, and has proven to be a fine late-season pickup. In keeper leagues, Montoya is showing that he’s ready for prime time play and that’s great news for Phoenix next season as it looks to end the long playoff drought in the desert.

The playoffs start next week. Enjoy!

By Steven Ovadia
This entry was posted on Friday, April 10th, 2009 at 11:11 am and is filed under HOCKEY, Ice Chips, Steven Ovadia. You can follow any responses to this entry through the RSS 2.0 feed. You can leave a response, or trackback from your own site.