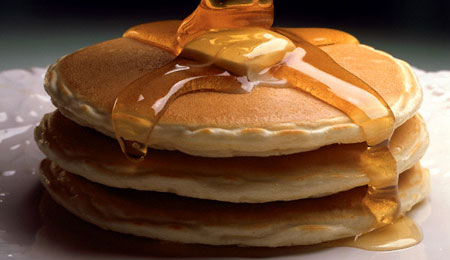 Derek recommends a healthy plate of pancakes prior to your draft.

And we’re back, with more of the 2008 RotoRob NFL Draft Kit, with Derek providing ten tips to help you make it through draft day.

Want to wear the proverbial brass ring once the dust settles after the 2008 fantasy football season? Follow these tips and you’ll be headed to the promise land…or at least somewhere nearby.

1. Failing to prepare is preparing to fail: Former UCLA basketball coach John Wooden is a bona fide genius and heeding his advice is a wise manoeuvre. Prepare yourself for battle. Mock drafts are all over the Internet and readily accessible. Go into a draft and target what players you want. Another preparation tool is setting up tiers for players at each position. For example, a grouping of the top five quarterbacks might be called gold or franchise. Meanwhile, the next five may be called second string. Whatever the name designation, it will prevent a foolish move such as taking Larry Johnson with the second pick overall. Utilizing tiering or examining ADP (average draft position) is a good way to get mentally prepared prior to the big day.

While all of these forms of preparation are fantastic; the sure fire way to ensure victory is by purchasing the Fantasy Football Guide 2008. I know, I know. Hey, if T.O. and Chad Johnson self-promote, why can’t I?

2. Feed the machine: If Michael Phelps taught us anything, it’s that great performance comes from substantial eating. Whether it’s at the draft site or beforehand at home, load up on the good stuff. Pancakes, eggs and bacon prior to an afternoon appointment; pizza and pasta are the go-to-guys prior to a night time draft. Perhaps 12,000 calories is overdoing it but you get the point. A legendary performance can only exist if an equally awesome pre-game appetite is quenched.

3. Bring more than one magazine: It never fails. Another owner will enter the draft without a magazine or with some ragtag collection of printouts. He will blame his girlfriend, wife, mailman or job. Instead of being a night in shining armor, hold your counterpart accountable for his transgression.

Don’t hand over a magazine to a fellow competitor. Bringing another magazine may provide another perspective or have it on hand just in case one magazine lacks in one area versus another. Unless you are a kind and gentle soul that listens to Sting and Bruce Hornsby, don’t be so kind of draft day.

4. Don’t pin your hopes on the franchise: What do LaDainian Tomlinson, Tom Brady, and Randy Moss all have in common besides owning NFL single season records? While this year potentially they could all be first round choices, in season’s past they’ve let you down during money time.

Despite throwing 50 touchdowns (23 scoring tosses going to Moss) last season, Brady’s Week 15 stat line (14-of-27, 140 yards, 0 TDs, INT) was a horror show for his owners. Moss clearly didn’t benefit from Brady’s sole statistical setback with five catches for 79 yards. Those performances certainly did not help owners advance in the fantasy playoffs. Meanwhile, Tomlinson faltered down the stretch in 2005 which likely doomed many of his owners.

The lesson is to never put all of your eggs in one basket and mindlessly go through the rest of a draft. Building depth at all positions can never be taken for granted. Once crunch time arrives in the fantasy playoffs, having another solid performer or two will help you survive a superstar’s off day.

5. Don’t fall for fool’s gold: Just because a player does well and wins Super Bowl MVP does not mean they will explode in the following season. Deion Branch, anyone? This year is no exception. Eli Manning’s schedule is Charmin-like during the first six weeks, but don’t reach for Peyton’s little brother too soon.

The Giants will not all of a sudden adopt a New England-esque approach with the passing game and one of his top targets, Plaxico Burress, is still battling ankle problems from a season ago.

6. To beer or not to beer, that is the question: Draft day is serious business. Not to sound like your mother, but drinking is highly dangerous if you have any designs on winning the league. Remember, only the strong survive in fantasy football. Put that brew down and sub in a water or soda. Better yet, pass the brewski down to your enemy and let him drink it. [Editor’s note: RotoRob says drinking enough beer to stop shaking from the night before is okay; but you must still be capable of operating heavy machinery.]

7. Think outside the box: Stud running backs are slowly becoming extinct. Teams using running back by committee continue to increase season by season. Last year, only 17 backs ran for at least 1,000 yards versus 23 in 2000. Coaches are beginning to finally understand that over usage of backs is not only a bad thing, but can alter your franchise for some time.

Towards the back end of the first round, don’t be afraid to grab a receiver or even a quarterback.

8. A Cold Day In Fantasy Hell: November and December are often tricky months for fantasy owners because weather can play such an unpredictable role in games. Week 15’s Jets-Patriots game saw driving winds that greatly altered the success of New England’s passing game which lead to Brady’s only game of the season with no touchdown passes. Heavy snow blanketed Cleveland during the same week which led to an 8-0 contest between the Browns and Bills. Poor stat outputs in these games helped end the post-season dreams for many fantasy owners.

Don’t ignore weather issues — especially at quarterback. Brady, Eli Manning, Donovan McNabb, Derek Anderson and Ben Roethlisberger are quarterbacks whose performances may be affected down the stretch because of inclement weather.

9. Kickers: Don’t ever take a kicker before a double digit round. Ideally, wait until the last couple of rounds to deal with one. Owners pass on talented players every year to take the Adam Vinatieris of the world. Who could have more of an impact on your team — an extra back or receiver, or a guy who didn’t kick a field goal of longer than 40 yards last season?

A couple of seasons ago, I saw an owner take David Akers in the eighth round. That’s just embarrassingly too high for a kicker.

10. Decompress: After browbeating owners with a great draft, sit back and enjoy life. Take some time to get away mentally from the mess. Andy, for one, watches The Hills religiously on Monday nights. While a bit misguided, it helps clear the mind. I’ll typically opt for an early season episode of 24 or the always epic Season Two of Miami Vice. Seriously, the Definitely Miami episode featuring Ted Nugent is required television viewing.

By Derek Jones
This entry was posted on Friday, August 22nd, 2008 at 1:13 pm and is filed under 2008 NFL Draft Kit, Derek Jones, FOOTBALL. You can follow any responses to this entry through the RSS 2.0 feed. You can skip to the end and leave a response. Pinging is currently not allowed.