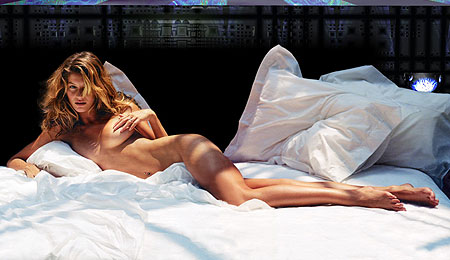 Hmmm…spending the offseason tossing the pigskin around or porking this? Tom Brady faces a tough call.

Are you wondering how Tom Brady is spending his offseason? What’s his workout regimen? How is he planning on preparing for the 2008 season to help the Patriots get back to the Super Bowl? Well, as part of his recent world trekking, he was spending time in Ibiza with gal pal Gisele Bundchen. They were at the world-famous party destination to be on hand for the unveiling of Vogue’s new collection of sunglasses. So, to answer your question, weights and workouts have been replaced by supermodels and shades. Nice work if you can get it.

Speaking of off field encounters, David and Victoria Beckham were seen at the Elton John concert in Las Vegas last month. Damn, they even brought their boys along to the weekend show. Isn’t it grand that the couple is exposing their children to “alternative lifestyles” at such a young age? After all, Saturday Night’s Alright for Fighting.

Anna Not Ready to Settle

Apparently, Anna Kournikova is not ready to settle for just one mixed doubles partner. The word on the street is that the tennis babe’s boyfriend, Enrique Iglesias, has repeatedly attempted to convince Anna to marry him, but to date, he keep double faulting.

The pair has been together for three years, and obviously Enrique is ready to settle. But, Anna? No way, Jose. Clearly, she’s holding out for RotoRob. And really, who could blame her? Damn, I might even let her serve to me, so to speak.

By RotoRob
This entry was posted on Saturday, May 3rd, 2008 at 5:53 pm and is filed under Misc., RotoRob, Squeeze Play. You can follow any responses to this entry through the RSS 2.0 feed. You can leave a response, or trackback from your own site.