Ice Chips: The Most Wonderful Time of the Year 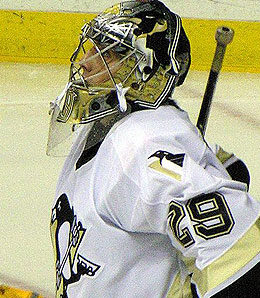 Chances are you didn’t pick Marc-Andre Fleury in your playoff pool, but he’s been fantastic so far. (Sean Russell)

The beauty of the NHL playoffs is that it’s a process. You rarely watch just one game and know a team is definitely out. Teams adjust. Teams get embarrassed. Teams fold. There are a lot of variables.

Having said that, though, Ottawa looks pretty done, having gone down 4-0 in its Game One loss to the Penguins. I don’t think Pittsburgh goalie Marc-Andre Fleury was a high draft pick in anyone’s playoff league, but he’s put up the first shutout of the playoffs. I don’t think people rushed to grab Pittsburgh’s Gary Roberts either, but he’s already got two goals, which is a little surprising given that he had just 30 goals in 119 previous playoff games. Also, in a bit of a surprise move, defenseman Darryl Sydor, a veteran of over 150 playoff games and two-time Cup-winner (with two different teams, no less), was a healthy scratch for the opener. Obviously, in Pittsburgh the only sure starter has an 87 on his back.

The Rangers-Devils playoff game went a bit more as planned. Scott Gomez, one of New York’s key off-season acquisitions and a former Devil, put up three assists. Henrik Lundquist, the Ranger rock-star goalie, made 26 saves, giving up just one goal. A bit more shocking was the distracted play of Devil goalie Martin Brodeur, who often seemed as if he didn’t realize he was in the crease. While it seems to be the inconsistent post-season Brodeur of the past few playoffs, it’s still a bit surprising for a goalie with 94 playoff wins, a 1.93 goals against and a .920 save percentage.

The Western Conference playoffs had its share of surprises, too. The Dallas Stars, who many have been predicting to implode since the trade deadline, beat the Ducks of Anaheim in Game One of the first round. Dallas goalie Marty Turco, whose reputation is pretty much based upon choking in the playoffs, put up a shutout and Anaheim goalie Jean-Sebastien Giguere, owner of a 31-13 playoff record going into last night’s loss, gave a .892 save percentage performance. Given all of the padding both goalies wear, it wouldn’t shock me to find out they switched places for the night. That would be a little funny and certainly explain plenty.

Over in Detroit, even they were the West’s top seed, it was still a little surprising the Red Wings managed to beat the Predators in Game One, given Detroit’s recent propensity for early rounds playoff exits. Detroit’s Johan Franzen continues his sick goal-scoring pace. Having ended the season with 15 goals in about a month, he put up a goal last night against Nashville. At this point, if you want to stop Franzen, you’re going to need to bring in the National Guard.

By Steven Ovadia
This entry was posted on Friday, April 11th, 2008 at 1:56 pm and is filed under HOCKEY, Ice Chips, Steven Ovadia. You can follow any responses to this entry through the RSS 2.0 feed. You can leave a response, or trackback from your own site.