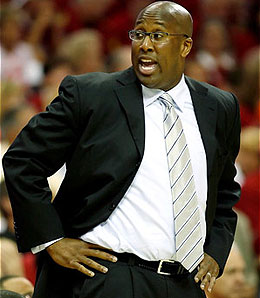 The Cleveland Cavaliers can breathe a sigh of relief as LeBron James, out the past couple days of practice because of his wonky back, has been cleared to play Wednesday night.

This is great news for the Cavs, who are trying to wrap up home court advantage in the first round of the playoffs before a big game next week against Philadelphia, one of the teams still threatening Cleveland’s hold on fourth place.

A win tonight at home against the Nets will be just what the doctor ordered for the Cavs, losers of two straight and six of their past ten.

After Wednesday morning’s shootaround, Coach Brown declared King James fit for duty. James has been dealing with back issues for several weeks, and it’s obviously been bothered him more recently, especially Saturday against the Magic when he struggled through a 6-for-22, 17-point game.

The NBA’s leading scorer has enjoyed perhaps his best overall season, but he’s missed more time than usual despite the Cavs doing their best to lighten his load, reducing James’ PT for the second straight season.

Other than LBJ’s deteriorating perimeter game, there’s been little to quibble with from him this season.

Will it be enough for his first MVP Award?

Well, the major obstacle here is that while James has personally succeeded, constant injuries and major rotation changes have made for a rather disappointing season for Cleveland as a team.

The defending Eastern Conference Champions entered the season riding back-to-back 50-win seasons, but cannot exceed 47 this year even if they should run the table over their final five games.

Cleveland’s offense has been no worse than last year, but the club has struggled defensively as it tries to hold off a late-season rush by Washington for the fourth spot in the East.

By RotoRob
This entry was posted on Wednesday, April 9th, 2008 at 3:37 pm and is filed under BASKETBALL, Injuries, RotoRob. You can follow any responses to this entry through the RSS 2.0 feed. You can skip to the end and leave a response. Pinging is currently not allowed.