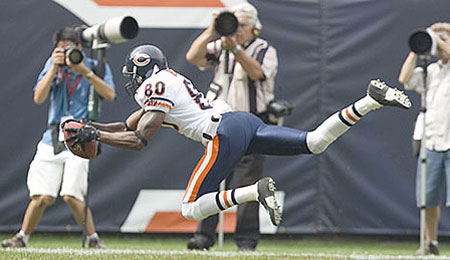 Bernard Berrian had somewhat of a breakout year, which he parlayed into a big-money deal with Minnesota. Such is life for the Bears these days. (By Todd Rosenberg, US Presswire )

Bernard Berrian almost got to 1,000 yards. Seriously, even the defense was terrible. How the hell did this team win seven games!? Oh, wait! Devin Hester scored a number of defensive/special teams touchdowns. And then teams figured out you shouldn’t kick to him. Whoops. This section is short, but I really can’t even mention any more names. How about another web site we love! (Okay, I love it; Derek may not be able to relate. Maybe.)

Well, this is easy. Rex Grossman and Cedric Benson are one of the worst quarterback-running back combos in the league. Unless the team is armed with the ’85 Bears defense, that’s not good enough. Benson and the Chicago rush game finished 30th in the league. Grossman got injured and eventually gave way to back-up quarterback Brian Griese. With those players struggling in ’07, it placed too much pressure on the shoulders of the defense.

After roster purges including Muhsin Muhammad, defensive tackle Darwin Walker (by the way, Chicago saved over $6 million by releasing Walker) and offense tackle Fred Miller, the Bears left themselves nearly $30 million of cap space. While the team saved money, it did not use it to improve on offense. Chicago lost its top receiver, Berrian, who did everything but stick up a bank in Minnesota by getting the Vikings to give him an absurd six-year, $42 million contract including $16 million in guaranteed cash. Although Chicago held on to linebacker Lance Briggs, its offense needs severe support.

Honestly, the Bears could draft any position other than kicker and kick returner and we wouldn’t be able to question their motives. Offensive line makes sense, so a Chris Williams or Ryan Clady wouldn’t surprise us. Maybe the Bears could try drafting a quarterback, although that probably won’t make sense until later rounds. Maybe the Bears could institute the little known Scrabble rule where a player can pass on his turn and exchange all of his pieces! No one will see that coming.

Quarterbacks – People hate change. No team reflects this concept quite like the Chicago Bears. Throughout the team’s rich history, all the way back to “Papa Bear” George Halas, it has leaned on running back play and strong defense. This combination has allowed the Bears to have game managers at quarterback. However, the Bears do not have a game manager at quarterback. They have game killers. Grossman and Kyle Orton are destined to see time as the starter in 2008. Grossman’s struggles are well documented, while Orton simply does not have the tools to lead the Bears to glory. Making matters worse, Berrian is gone. Goodbye long ball weapon!

Running Backs – They have the wrong Adrian Peterson, so maybe they also have the wrong Cedric Benson. There’s got to be another, more talented Benson out there. Of course the Lions would probably then draft said Benson. There’s also at least two Ricky Williams that can’t help the Bears, so they will probably give one a contract.

Wide Receivers – Woah. For some reason the Vikings paid Berrian about five times what he deserved. This screws over both teams, which is maybe why they did it. What’s left in Chicago is absolutely nothing. Da Bears will have zero passing yards. Mark my words.

Tight Ends – Oh, wait. Okay, unmark my words. Desmond Clark and Greg Olsen are a half-decent tight end duo, if there is such a thing. They’ll work together and make sure neither helps fantasy teams. Oh joy, oh bliss.

Defense/Special Teams – The special teams can be summed up by one name: Hester. He’s already established himself as one of the greatest return men in the history of the league and he is only entering his third season. Mixed with what should be another solid year from the Bears, Chicago’s defense/special teams should be tops in the fantasy world again.

The Skinny – Even fans of the Bears will find watching Chicago games a painful three hours.

By Andy Goldstein
This entry was posted on Thursday, April 3rd, 2008 at 4:27 pm and is filed under Andy Goldstein, Derek Jones, FOOTBALL, Team report. You can follow any responses to this entry through the RSS 2.0 feed. You can leave a response, or trackback from your own site.