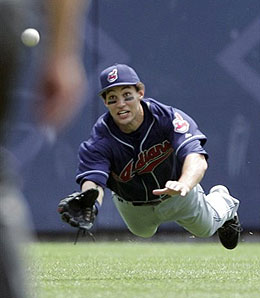 With the season officially kicking off Tuesday as the BoSox take on the A’s in Japan, I thought it would be appropriate to examine the key stories to follow this year in the Junior Circuit. I’m leaving this one wide open for some reader input, so feel free to jump in with your opinions. Let’s hear what you think, people.

1. Can Boston withstand Josh Beckett’s back and Curt Schilling’s shoulder?

2. Can the Yankees continue their playoff streak without Joe Torre?

3. Is Toronto’s pitching staff good enough to close the gap on Boston and New York?

4. Will Grady Sizemore win the AL MVP this season?

5. Will dropping the “Devil” from “Devil Rays” allow Tampa Bay to finally top the 70-win mark?

6. Will dealing Erik Bedard and Miguel Tejada reap rewards for Baltimore by the end of the decade?

7. Does adding Miguel Cabrera, Dontrelle Willis and Edgar Renteria put Detroit and its lineup of seven former All-Stars over the top?

8. Has Seattle improved its rotation enough to compete in the AL West?

9. Does adding Torii Hunter finally give Vladimir Guerrero the protection he needs in the Angels’ lineup?

10. Will the ChiSox have enough starting pitching after Javier Vazquez and Mark Buehrle?

11. Can a healthy Francisco Liriano make up for the loss of Johan Santana in Minnesota?

12. Can Trey Hillman work his NPB magic in Kansas City?

13. Will Texas ever have a pitching staff capable of competing?

14. How long will Joe Blanton remain on the A’s?

15. Can Cleveland break through for its first World Series title since 1948?

16. Can Carlos Pena come even close to matching his 46-homer, 121-RBI breakout season?

17. Will Adam Jones make Orioles’ fans forget they had one of the best lefties in the game?

19. How will the Angels cope without John Lackey and Kelvim Escobar to start the season?

20. How much better will Daisuke Matsuzuka be in his second MLB season?

By RotoRob
Tags: American League
This entry was posted on Monday, March 24th, 2008 at 12:37 pm and is filed under BASEBALL, RotoRob. You can follow any responses to this entry through the RSS 2.0 feed. Both comments and pings are currently closed.