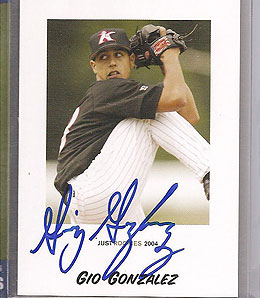 I was remiss not to mention Gio Gonzalez in our A’s Season Preview. Forgive me, Tim.

Further to Tuesday’s season preview of the Oakland A’s, RotoRob writer Tim McLeod gave me some shit for not mentioning Gio Gonzalez, one of his personal faves and part of the booty from the Nick Swisher trade.

As we know, the A’s have parted with plenty of stars over the last six or seven years, allowing them to either walk as free agents, or dealing them as they neared free agency. Included in this list are such one-time or current studs as Jason Giambi, Miguel Tejada, Tim Hudson, Mark Mulder and Barry Zito.

But what about the players Oakland has gotten back through its purging? Let’s check how that’s gone.

By allowing Giambi to bolt to the Yanks, Oakland received two picks, the first of which was used to select Joe Blanton, the second to grab catcher Jeremy Brown. Blanton, as discussed, is now the de facto ace, although could be on his way out in the next deal. Brown is still improving offensively, but is no longer exclusively a catcher and has been passed by Kurt Suzuki as the catching option going forward.

When Tejada left for Charm City in 2003, the A’s again got two picks as compensation. The first one turned out to be Huston Street – another wise choice, but, like Blanton, perhaps someone who will be in the next wave of A’s to be sent packing. The second draft pick was used to get Michael Rogers, a swingman who has not panned out (career ERA of almost 6.00) yet, and looks like an extreme longshot.

When Oakland dealt Hudson to the Braves in 2004, the return was outfielder Charles Thomas, SP Dan Meyer and RP Juan Cruz. Thomas played all of 30 games with the A’s before being dealt to Milwaukee for catcher J.D. Closser, who is looking like an organizational player at best. Meyer, as I discussed in the preview, has a chance to stick as the fifth starter. And Cruz was absolute firestarter in his one season in an Oakland uni before he was dealt to ‘Zona for Brad Halsey, who was decent as a swingman in 2006 before missing most of last season with an injury.

Dealing Agent Mulder in 2004 turned out to be a fantastic move. Not only did the A’s get top prospect Daric Barton, dependable (until last year) reliever Kiko Calero and emerging ace Dan Haren back from the Cards, but Mulder’s incessant injury issues have made the trade incredibly one-sided in the A’s favour.

When Zito was signed away by the Giants, the A’s earned themselves two bonus picks in last year’s draft. They used them to grab Sean Doolittle, a two-way college star likely ticketed to play first base as a pro, and Grant Desme, who will hopefully help address the team’s lack of outfield depth over the next couple of years.

When Haren was flipped this offseason (along with Connor Robertson), Oakland got a boatload of prospects from Arizona: Brett Anderson (one of the top pitching prospects in the game), Dana Eveland (who could win the fifth starter job this spring), Greg Smith (another arm with great potential), Aaron Cunningham (adding some much needed outfield depth), Carlos Gonzalez (a future fixture in LF in Oakland) and Chris Carter (another dart at first base).

In addition to Gio Gonzalez, the A’s also landed good looking young pitcher Fautino De Los Santos and OF prospect Ryan Sweeney from the Sox in exchange for Swisher.

And in exchange for Mark Kotsay, the A’s received future closer Joey Devine from the Braves.

By RotoRob
Tags: Mikko Koivu
This entry was posted on Thursday, March 20th, 2008 at 12:03 pm and is filed under Uncategorized. You can follow any responses to this entry through the RSS 2.0 feed. You can leave a response, or trackback from your own site.