The Wire Troll: Over the Moon 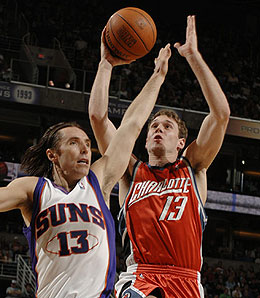 As long as he’s starting, Matt Carroll, right, is a tremendous source of threes.

With the fantasy playoffs looming on the horizon, it is very difficult to find multi-category studs on the wire. Unless a big name player goes down with an injury (as discussed last week) or a team throws in the towel and starts to give younger players more minutes, it is very difficult to find gems at this late stage in the season. At this point, my strategy is to target guys who fulfill specific needs for my team. This week’s Wire Troll breaks down the wire candidates based on the categories to which each player contributes.

The injury to Chris Bosh has provided additional minutes for Moon, a rookie who delivers multiple category production. Moon will not blow you away with his scoring or passing, but his strengths lie in his rebounding and his ability to get steals and blocks. In his last five games, he has averaged 8.2 points, 5.4 rebounds, 1.4 steals and 2.2 blocks. If Moon is available in your league, he is a great option who can help your team in the sometimes-overlooked steals and blocks categories.

Carroll is another player who has benefited immensely from an injury. The concussion suffered by Gerald Wallace allowed Carroll to be inserted into the Bobcats’ starting lineup and he has excelled with the increase in minutes. Since Wallace’s injury, Carroll has been on fire from beyond the arc, which includes a three-game stretch where he hit 14 threes before struggling Friday night against the Rockets. Wallace is now back, and slowly increasing his minutes as he comes off the bench. Until Crash returns to the starting lineup, Carroll is worth monitoring in deep leagues and should be picked up if Wallace experiences any set backs.

Przybilla has been a monster on the glass in the last month for Portland, grabbing ten or more rebounds in nine of his last 13 games. In his last five games, he has averaged 10.2 boards and 1.8 blocks per game. Przybilla is a decent number two centre in all leagues and should be picked up if he is available.

Perkins has been a bit inconsistent this year with the Celtics, but the wealth of talent surrounding him has had a great effect on his game and his growth in maturity and confidence has been remarkable. In Perkins’ last five games, he is averaging 10.4 points, 8.8 rebounds and 3.2 blocks. He is an absolute pick up if he is available in your league.

While it is unlikely that Blake is available in your league, his recent numbers are worth discussing. His production had been slipping, even to the point where Jarrett Jack took over the starting PG position. However, Blake has rebounded and regained his starting role, averaging 6.8 assists in his last five games. He is a decent source of assists and should be considered if your team is in need of some dime-dropping ability.

The injuries to Dwyane Wade, Dorell Wright and Marcus Banks have left a huge void for the Miami Heat. Insert Cook, who was recently recalled from the D-League. Since being inserted into the starting lineup, Cook is playing 37 minutes per game and is averaging 11.5 PPG. He has been struggling with his shot, but Cook is a very intriguing pick up due to the heavy minutes he will be seeing for the depleted Heat.

Pietrus has been inserted into the starting lineup for the Warriors and has been playing heavy minutes. Normally, that is a great thing. However, this is the Warriors, and coach Don Nelson is infamous for changing his starting lineup on a whim, so realize that almost anyone’s value can change quickly on this team. In his last five games, Pietrus has scored 11.4 PPG, while averaging 8.2 boards and 1.6 steals. Pietrus is a solid pick up when he is playing steady minutes.

Pavlovic returned from a 23-game absence due to a sprained left foot, and had an immediate impact on the Cavs. In his second game back (he only played ten minutes in his first game), Pavlovic scored 24 points, hitting five treys and shooting 50 per cent from the floor. Pavlovic is definitely worth monitoring as his minutes begin to increase.

By Jordan Frank
This entry was posted on Saturday, March 15th, 2008 at 6:46 pm and is filed under BASKETBALL, Jordan Frank, The Wire Troll. You can follow any responses to this entry through the RSS 2.0 feed. You can skip to the end and leave a response. Pinging is currently not allowed.