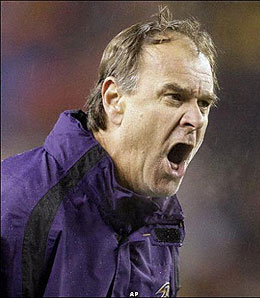 For the first time since 1998, the Ravens won’t have Brian Billick barking out orders. (AP Photo/David Zalubowski)

One can’t live on past accomplishments forever. The Ravens wisely fired Super Bowl winning head coach Brian Billick after a dismal 2007 season. Projected by many to be a Super Bowl contender, Baltimore failed to live up to expectations. By the way, Billick is another example of how overvalued coaching is sometimes.

When Billick was offensive coordinator of the Vikings in 1998, the team set a then-NFL scoring record for a single season with 556 points. However, Billick’s Ravens averaged just 19 points per game over 144 regular season contests. While coaching helps, talent and execution essentially wins games. Randall Cunningham and Randy Moss are a lot different than Kyle Boller and Mark Clayton.

On the field last season, Baltimore’s defense was once again menacing at times. They finished sixth in the league despite being saddled with one of the league’s worst offenses. Speaking of the offensive ineptitude, only RB Willis McGahee and wide out Derrick Mason managed to stand out. McGahee ran for 1,200 yards in his first year as a Raven, while Mason caught 103 balls and finished 1,087 yards receiving.

So a team wins a lousy Super Bowl without a legitimate quarterback and they try to play the next decade with the same philosophy. Awesome. Steve McNair is so past his prime that we don’t even need to make jokes about it. Boller is barely better and he’s in his prime. They combined for 11 scores and 14 interceptions. The fan base clamoured for Troy Smith. I’m not making this up. Their passing struggles also led to an anemic wide out group. Potential sleeper Clayton made us look silly by managing to play in every game, starting 12 of them, and not notching a touchdown. Also, Todd Heap had another injury-marred season. And we’re pretty sick of that.

As RotoRob mentioned in one of his rare football forays, new head coach John Harbaugh will have his work cut out for him as he tries to change the chemistry, and then perhaps finally the Ravens can turn the page towards a new era. Baltimore’s philosophy of defense first needs to be refined. Harbaugh spent years with Andy Reid in Philadelphia and learned that having a productive quarterback and good defense typically yields successful results. Furthermore, the Ravens have to put away the AARP cards. Younger and quicker players are needed in the secondary and on offense. They’ll probably have to do most of this through the draft considering they don’t have a ton of cap space (entering the offseason, they had roughly over $7 million dollars of cap space, one of the lowest figures in the league).

We always check NFL Draft Countdown when it comes to what the experts are thinking on the draft, mainly because we want to make sure we’re not crazy. It seems as though we may need our heads checked. They think the Ravens will take a corner, Leodis McKelvin (oh lord, we’ll never be able to spell that without checking every time) to be exact. We hope the Ravens move down and draft one of the second-tier quarterbacks. They need to continue taking shots in the dark until one hits.

Quarterbacks – Tony Banks, Dilfer, Elvis Grbac, Cunningham, Anthony Wright, Boller, McNair and Smith. That’s quite the quarterback legacy that Billick left. Now, McNair and Boller are left for the starting role in 2008. General Manager Ozzie Newsome says as of right now McNair is the starter. Physically, Boller is probably the better option at this point, given that McNair is rehabbing a shoulder injury that ended his 2007 season. The veteran from Alcorn State is a better quarterback, but out of his prime and unable to stay healthy for an entire 16-game schedule.

Running Backs – McGahee ran for over 1,200 yards last season and finally started to show promise again in his first season with the team. With McGahee’s injury history, a bit more stability behind him would not hurt. Musa Smith served that role last season, but if anything happens to McGahee, Smith will not be nearly enough. Drafting a running back in the later rounds is not a bad option for the Ravens.

Wide Receivers – Yes, Mason crossed into the 1,000-yard group once again. That doesn’t mean we’ll ever draft him. It’s like picking up vanilla wafers in the cookie aisle. Clayton is, by far, the most intriguing option. He plays a bit like Chris Chambers. He’s not a great route runner, but he provides a deep threat and can catch anything near him. Unfortunately, injuries slowed the start of his campaign and he never really recovered. Some of that is on the quarterback play, but some of that is also on him. Believe it or not, he has top 15 talent and taking a late round (very late round) flier on him still makes sense to us. And yes, Demetrious Williams and Devard Darling both made plays here and there, but neither are worth considering.

Tight Ends – Heap is batting just above .500 in terms of games played in his career. If you think he’ll stay healthy, then by all means go with him. Or you can just not draft a tight end until the last round and use the fifth or sixth rounder on a guy that will actually win you a title. Your call.

Defense/Special Teams – Safety Ed Reed is the life of the party on defense along with linebacker Ray Lewis. Super Bowl XXXV MVP Lewis is aging, though, and is not the overpowering force he used to be. The special teams is always a threat with Baltimore. Reed and Yamon Figurs can make big plays, having each returned punts for touchdowns a season ago. Figurs also ran back a kick for a score. This productivity will probably lead to some fool in your fantasy draft taking the Ravens’ defense/special teams in the fifth round.

By Andy Goldstein
This entry was posted on Saturday, March 15th, 2008 at 11:57 am and is filed under Andy Goldstein, Derek Jones, FOOTBALL, Team report. You can follow any responses to this entry through the RSS 2.0 feed. You can skip to the end and leave a response. Pinging is currently not allowed.