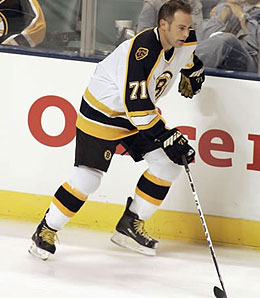 Marc Savard is one of the NHL’s hottest players currently.

Now, with the trade deadline passed, there’s really nothing left to do, but focus on the performance of your players. If you’ve been hoarding passers, waiting for your team to land a sniper and it didn’t happen by Tuesday, you made a poor fantasy choice. I’m sorry there’s not a nicer way to say that.

Boston’s Marc Savard is a puck-dishing fool. He’s got 58 assists over 62 games. As if that wasn’t enough, he even has 14 goals. He’s been on a tear, too. His last pointless game? Two weeks ago.

A lot of people grabbed Teemu Selanne at various points in the season, hoping the Finnish Flash would return to the NHL for a victory lap. It seems like these fantasy players were well-rewarded. Selanne has put up six goals and five assists in his first 10 games back. That includes a hat trick against Chicago over the weekend.

Paul Stastny, who returned to the Colorado Avalanche from an appendectomy, has also been successful. He’s got two goals and an assist in his first four games back. Imagine how he’ll be rolling when he’s feeling 100 per cent. Joe Sakic has also returned to the Avs’ lineup, having survived hernia surgery. Sakic has just a goal and an assist in the first three games back, but he’s managed to put up 24 points in just 27 games this season. Obviously, if you kept him on your roster all of this time, he hasn’t helped you very much, but if he’s available via waivers, why not grab him and hope for the best?

Steve Bernier is off to a good start in Buffalo, by the way. With two goals in his first 15 minutes of ice time, he finished his first game as a Sabre with three points. At this rate, he’ll be a 30-goal scorer by the end of the weekend. He won’t keep up this pace, I assume, but he could be about to heat up.

The Penguins have got to love Marian Hossa spraining his MCL in his first game for them. He’s expected to be out about a week. Hopefully, this isn’t some kind of omen.

By Steven Ovadia
This entry was posted on Friday, February 29th, 2008 at 11:59 am and is filed under HOCKEY, Ice Chips, Steven Ovadia. You can follow any responses to this entry through the RSS 2.0 feed. You can leave a response, or trackback from your own site.