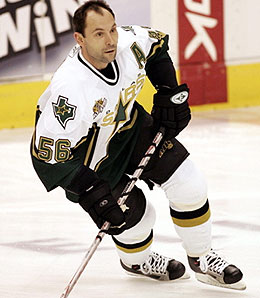 Sergei Zubov may lose even more hair now that surgery will sideline him close to another month.

The Dallas Stars with be without star defenseman Sergei Zubov for another three-to-four weeks after he underwent surgery to repair a foot fracture this week.

He’s already missed the past 18 games because of this injury and a groin problem, but he was hoping to start skating next week before this setback.

Worse yet, Dallas didn’t address the situation at the deadline. The team has been using essentially just six defensemen all year – three of them rookies – and they opted to stand pat. Fortunately, the Stars are about to get a huge boost now that Phillipe Boucher has been activated and is expected to return to action tomorrow night for the first time since undergoing shoulder surgery in early December.

Still, Dallas is desperately missing Zubov, who was having a Norris Trophy-type season with four goals, 31 assists and a +6 ranking in 46 games before going down in the middle of last month.

Now, he’s got a screw in his foot, and owners everywhere are just screwed.

All told, Zubov has already missed 21 games this season and he will wind up playing the lowest number of games he’s totaled since the strike-shortened 1994-95 season. Unbelievably, he is still third on the team in assists and fourth in overall scoring, reaching 30 assists for the 12th straight season – the longest active streak by any NHL defenseman.

Earlier this season, the 37-year-old became just the 15th defenseman in league history to reach 600 assists.

Despite missing Zubov, Dallas has been on a major roll lately, going 12-2 since January 29. This run has allowed them to build a six-point lead over second place Anaheim (who has one game in hand) in the Pacific Division. And now the Stars head home for a three-game stand that offers them a chance to widen their lead. They face a middling Chicago club, Nashville, who has played poorly on the road, and then Phoenix, an excellent road team, but one that has been spinning its wheels of late.

Zubov has already been dropped in many shallow leagues, and this news will surely see him dumped in plenty more. If you’re looking to take advantage of the situation, try picking up Boucher, who was struggling before his injury, but enjoyed a career year offensively in 2006-07; Stephane Robidas, who has already matched his career high with six goals in 66 games; or Matt Niskanen, who is enjoying a superb rookie campaign with six goals and a +17 ranking.

By RotoRob
This entry was posted on Wednesday, February 27th, 2008 at 7:25 pm and is filed under HOCKEY, Injuries, RotoRob. You can follow any responses to this entry through the RSS 2.0 feed. You can skip to the end and leave a response. Pinging is currently not allowed.