Transactional Analysis: An Exchange of Headaches 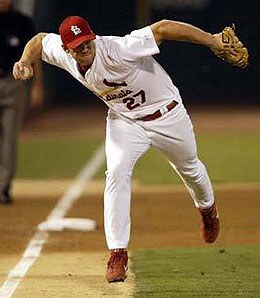 Scott Rolen brings his Gold Glove defense to Toronto, where his offense should rebound now that he’s healthy.

This week’s deal that sent Scott Rolen from the Cards to the Jays for Troy Glaus sure helps both teams rid themselves of problems.

Will a fresh start help each player?

Rolen has been dogged by incessant shoulder woes in recent seasons and, of course, his long-standing fued with manager Tony LaRussa. He was just a shell of himself last year, batting only .265 with a sub-.400 SLG before surgery finally shut him down.

Glaus’ season also ended early thanks to surgery on his foot, shortly after the whole steroids scandal broke. Rather convenient timing for the Jays to decide to shut him down.

Rolen, 32, was held to single digits in long balls – mainly because his shoulder woes rendered him unable to lift the ball with any strength. In fact, he was producing ground balls at a higher rate than any time since 1997.

But there are some promising signs that Rolen will provide the Jays the best of this deal, and has the best chance of the pair to bounce back. First off, he says he’s finally healthy, which is the key. Secondly, he was a .289 hitter away from Busch, whereas at home he was horrible (685 OPS). It will interesting to see the career NLer in the Junior Circuit, but I believe Rolen has a great chance to rebound to his 25-homer or more days. The Rogers Centre played as a slightly better hitter’s park than Busch (although both leaned towards pitchers last year), but from a long-ball perspective, it was no contest. The Rogers Centre is a great long-ball park, whereas Busch is anything but.

Glaus, meanwhile, managed just 20 homers in 115 games last year – not inspiring with him moving to a harder home park for such exploits (and he’ll be clean, to boot). One year Rolen’s junior, Glaus has slipped since arriving in Toronto after spending one year in the NL with the D-Backs. Really, he’s never come close to duplicating his big seasons with the Halos.

More food for thought: Glaus’ OPS was 75 points higher in Toronto than on the road last year.

Finally, let’s consider that Rolen will help the Jays’ pitchers with his defense, while Glaus, I have long maintained, is a first baseman/DH waiting to happen, especially because of his health issues over the years.

The upshot? I like this deal from Toronto’s perspective, especially if the fresh start away from LaRussa rejuvenates Rolen.

By RotoRob
This entry was posted on Saturday, January 19th, 2008 at 5:46 pm and is filed under BASEBALL, RotoRob, Transactional analysis. You can follow any responses to this entry through the RSS 2.0 feed. You can leave a response, or trackback from your own site.