By RotoRob and Tim McLeod

At last, we come to the end of our 2007 Awards. Don’t forget to check out our Basketball, Football and Hockey Awards as well. 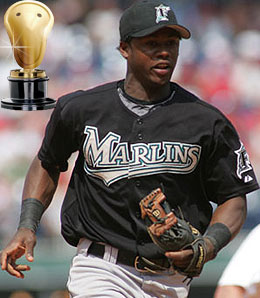 Hanley Ramirez has arrived at the top of the Fantasy heap.

It’s hard to ignore the season for the ages that Alex Rodriguez enjoyed in 2007, but relative to his draft position, Hanley Ramirez was the absolute biggest stud in fantasy baseball last year. We’re talking about a mid-third rounder who wound up delivering mid-first round value. Power, speed, average; you name it, H-Ram did it. One-hundred and twenty-five runs? On a middling offensive team? Oh man. I also love that he cut his strikeout rate, and the fact that Ramirez is just 24 helps earns him the top spot in this year’s RotoRob Baseball Awards. 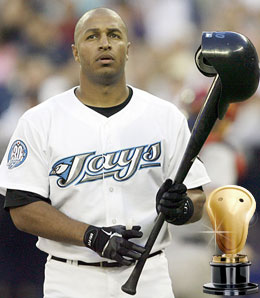 A .245 season wasn’t exactly what Fantasy owners were counting on from Vernon Wells in 2007.

As always, there are plenty of candidates, but after his stellar 2006, so much more was expected of Vernon Wells this past season. But a bum shoulder really limited his effectiveness and he wound up batting a career-worst .245. Wells will again be patrolling centrefield in Toronto and will undoubtedly bounce back, but he sure sunk plenty a fantasy team in 2007. 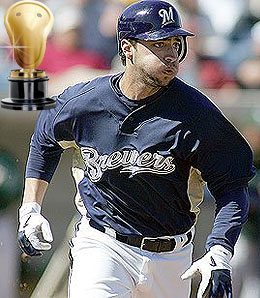 Forget about the ROY Award; Ryan Braun could have been an MVP candidate had he been called up earlier.

Only seven players enjoyed a higher OPS than Ryan Braun. Had he been up all season, Braun could very well have garnered MVP consideration. As is, in just 451 at-bats, he smacked 34 homers and swiped 15 bases while batting .324 with a .370 OBP. Yes, he’s the real deal. Don’t be surprised to see this kid become a perennial MVP candidate. 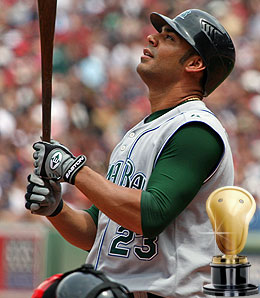 There are plenty of candidates for this honour, but it’s impossible to ignore the dude who was released twice and outrighted off the roster from a third team in 2006 only to parlay a minor league deal in February 2007 into a full-time job and 46 homers. It’s hard to understand exactly where this season came from for Carlos Pena, but the Rays gave him a legitimate shot and he simply grabbed it and ran with it. 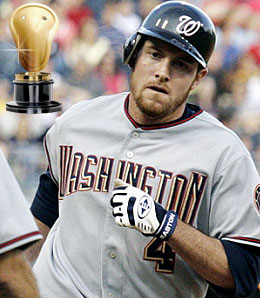 Ryan Langerhans was passed around like a cheap ‘ho last season.

How do you think Ryan Langerhans felt, going from the top of the Braves’ depth chart in left field, to being dealt to Oakland for cash, and then flipped to Washington just two days later? In describing his days (all two of them) in Oakland, Langerhans actually managed to spew out this gem after the deal from the A’s: “I enjoyed my time here.”

We Can’t Help But be Skeptical Award

Long a problem child, Josh Hamilton lands in the hospital for a “stomach problem” (yeah, right). Manager Jerry Narron says “He had a bad stomach ache. He might have eaten 10 hot dogs.” Uh, yeah. Or he might have ODed on something. Perhaps “hot dogs” is a euphamism for “speed balls.” 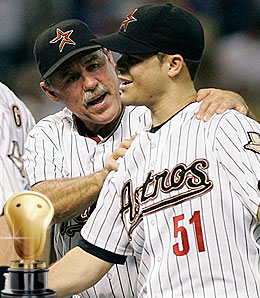 Oh sure, ex-Astros’ manager Phil Garner loved Wandy Rodriguez, right, when he pitched at home. On the road, not so much.

Wandy Rodriguez was perhaps the most schizophrenic pitcher in the game last season. Pitching in the Juice Box (which actually was much more of a pitcher’s park in 2007), he went 6-3, 2.94 with a .220 BAA. In his starts outside of Minute Maid, Rodriguez went 3-10, 6.37 with a .287 BAA. Spotting trends like this early in the season can really help you maximize your rotation.

The Can Miss Award

When Mark Prior came into the bigs and ascended to Cy Young candidacy within a couple of years, some were already etching his name on a Hall of Fame plaque. Clearly, that was premature. Prior’s incessant inability to stay healthy since 2004 proves that there is no such thing as a can’t miss superstar – especially when dealing with pitchers. I’d suggest the only can’t miss we can offer up about Prior’s impending tenure with the Padres is a trip to the DL.

Aren’t You Glad You Didn’t Make that Trade? 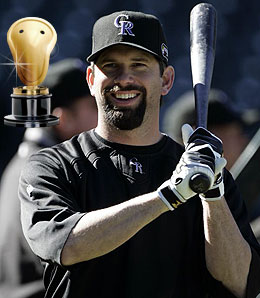 The fact that Todd Helton was not dealt to Boston wound up be a massive blessing in disguise. (Jack Dempsey/Associated Press)

Remember when Todd Helton was supposedly headed to Boston in a pre-season deal that would have sent Mike Lowell, Julian Tavarez and a prospect (possibly Jacoby Ellsbury) to Colorado? Well, not making that trade turned out pretty darned well for Boston. Playing first base for Boston, Kevin Youkilis wasn’t that far off from what Helton did, and Youk was absolutely stellar with the glove. Boston was much better defensively keeping Lowell at third (instead of shifting Youkilis back there) and Lowell wound up being the Sox MVP as they went on to win the World Series. And Ellsbury? Uh, yeah. His stock went up just a bit this year. 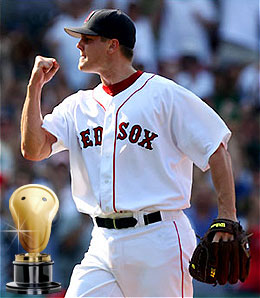 Where would the Sox have been in 2007 without Jonathan Papelbon closing? (Damian Strohmeyer/SI)

In yet another Red Sox move that wasn’t made and turned out working like a charm, Jon Papelbon’s decision to inform the team that he really did not want to move back into the rotation but would prefer to remain the closer, was perhaps the turning point on the Boston season. Imagine how the 2007 BoSox season would have played out without Papelbon saving games. Sometimes, it’s the tinkering you don’t do that works out the best.

Best Under the Radar Signing

Still with Boston, much hype was heaped upon the Daisuke Matsuzaka signing, and there was also plenty written about the Yankees and their “consolation prize” of Kei Igawa. But when Boston signed lefty reliever Hideki Okajima, barely anyone batted an eyelash. Apparently, Okajima was far more than some Japanese pitcher the Sox signed to help Dice-K’s transition to North America. He proved to be one of the most unhittable relievers in the game, earning an All-Star appearance for his efforts.

Choke of the Year

The New York Mets were home and cooled, seven games up in the NL East with 17 games to play, yet they somehow lost that lead and missed the playoffs – one of the worst chokes in big league history. It was the first time in MLB history that a team blew that big a lead with just 17 games to play. I probably would have enjoyed watching this happen to the Yankees more, but seeing the Mets implode definitely offered its rewards. 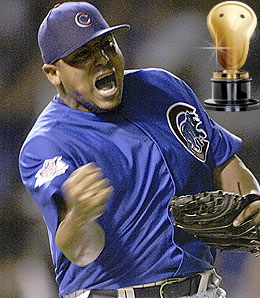 Deciding which Big Z would show up from month to month in 2007 proved extremely challenging.

Carlos Zambrano earns a nod for putting fantasy owners through the ringer in 2007 with his horribly inconsistent season. He was battered in April (5.77 ERA), not much better in May (4.72), but then suddenly turned things around and got on a serious roll for the next two months. Big Z was brilliant in June (2.53) and then almost untouchable in July (1.39). Then, just as quickly, Zambrano was worse then ever, struggling through a winless, 7.06 August. Finally, he settled down and pitched to more or less to our expectations in September (3.44). If you were stuck trying to figure out Zambrano’s trends this season, no doubt you were on the hook for plenty of beat-downs and probably missed out on some gems as well.

Let’s give credit where credit is due. Heading into the season, most of us were expecting the Washington Nationals would be lucky to win 50 games. Many thought they could set futility records. But they were as good as 53-62 as of August 9, and – with a final tally of 73 wins – seriously surpassed most people’s prognostications and even managed to avoid the NL East cellar.

All the talent in the world and a 100 mph fastball doesn’t guarantee success. Long-touted as a closer of the future, the future keeps getting delayed as Joel Zumaya deals with one injury after another, each suffered off the playing field. First came the tendon surgery – a result of playing took much Guitar Hero. Uh, yeah. Then, he needed shoulder surgery after a 60-pound box landed on his shoulder while he was trying to move some stuff. Dude, you make enough money to hire someone to do that for you. Would it be any shock to find out that Zumaya was involved in this video? If Zumaya ever matures, he’s got a hell of a future as a top-notch closer. If…

There are plenty of possible candidates here, but since winning back-to-back division titles in 1998 and 1999, the Texas Rangers have been in a serious holding pattern. There have been times they looked liked they were making progress, only to slide back to their typical losing ways. At any rate, thanks to their inability to either develop or lure quality pitching (Kevin Millwood doesn’t count as he’s sucked since they signed him) to Arlington, the Rangers have been doomed to five last-place finishes and three third place finishes this decade. They have some good young pitching in the system, so there’s hope, but strangely, I’m not holding my breath just yet.

Special mention to Toronto GM J.P. Ricciardi here for his shocking deception to the media when B.J. Ryan was dealing with a “back” injury during Spring Training. I’m really surprised Ricciardi wasn’t raked over the coals more after it was finally revealed that it was actually Ryan’s elbow that was the problem. That he got his manager and Ryan to go along with this farce was even worse. As a fantasy player, how do you clearly assess Toronto injuries now that this precedent has been set?

Playing With Yourself Award 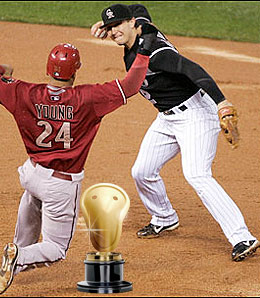 No, we’re not suggesting that Troy Tulowitzki is a jerk-off king, but he definitely knows how go solo. (AP)

While we can’t comment on Troy Tulowitzi’s mastery of the art of onanism, the Rockies’ shortstop definitely knows how to make things happen, solo style. That unassisted triple play he turned in on April 29 was just the 13th in big league history.

What Did You Eat for Breakfast Award

On August 21, Garret Anderson put up a game for the ages, cranking a grand slam and a three-run shot en route to a 10-RBI day. Of course, raise your hands if you actually had Anderson active that day. He’s just the 13th player in MLB history to have that many ribbies in one game.

“Put Me Out, Coach” Award 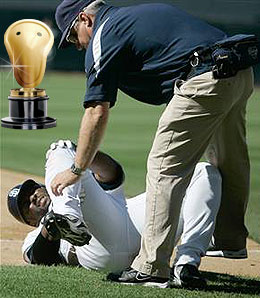 Milton Bradley’s career as a Padre was snuffed out by his own manager. (Lenny Ignelzi/AP)

Milton Bradley has had a tumultuous career to say the least, but when he was injured while being restrained by his own manager in September, that took the cake as the most bizarre moment in his checkered career. The fact that the incident occurred just innings after Bradley knocked out teammate Mike Cameron by stepping on his hand made the Padres’ day all the more sureal.

Much Ado About Nothing Award

The Mitchell Report? Booooorrrring. So now the greatest hitter of our time (Barry Bonds) and the greatest pitcher of our time (Roger Clemens) are intrinsically linked forever. Let’s let Rafael Palmeiro clear this scandal up once and for all. Speaking of boring, Mike Wallace’s interview of Roger Clemens on 60 Minutes was among the most banal moments in television history.

By RotoRob
This entry was posted on Monday, January 7th, 2008 at 2:28 pm and is filed under BASEBALL, RotoRob Awards. You can follow any responses to this entry through the RSS 2.0 feed. Both comments and pings are currently closed.