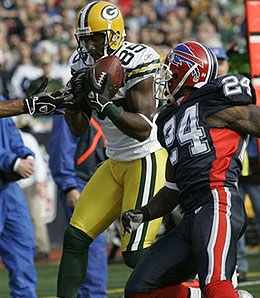 Greg Jennings, left, has become the key big-play threat for the Packers.

1. Terrell Owens at Carolina– Last week was not one for star players as T.O. found out. If Tony Romo’s thumb doesn’t improve, that could spell doom for Owens owners as well. Jessica Simpson is not helping either.

2. Braylon Edwards at Cincinnati– The Bengals’ defense is just sad. Edwards should shine on Sunday.

3. Randy Moss vs. Miami– When Andy and I were in our podcasting days, we often lamented the Northeast quarterbacks during fantasy playoff time. Guys like Tom Brady and Donovan McNabb are bad news at this point of the season because typically they play a cold weather game during fantasy playoffs which can yield low production. As Moss and Brady owners found out last week, a season’s worth of historic production can be meaningless after 60 minutes of football.

4. Reggie Wayne vs. Houston– The Colts aren’t really playing for anything, but they’ll probably still give an A effort as the playoffs loom.

5. Marques Colston vs. Philadelphia– Colston is one of the second-half turnarounds of the season. He should play well against the Eagles’ secondary.

6. Larry Fitzgerald vs. Atlanta– Injuries aside, Fitz will hurt the Falcons with big plays downfield.

7. Greg Jennings at Chicago– Brett Favre did not play well against Chicago in Green Bay’s only home loss of the season. Yet, Jennings has blossomed into a significant big play threat for the Packers.

8. Andre Johnson at Indianapolis– It’s a shame he missed a majority of the season due to a knee injury. He has been Houston’s most consistent offensive option.

9. Chad Johnson vs. Cleveland– His days in Cincinnati may be numbered.

10. Wes Welker vs. Miami– He hasn’t produced the last few weeks. Look for the Patriots to try to re-establish him in the offense.

11. Joey Galloway at San Francisco– This is the guy that beats you championship games and it’s going to annoy you for the next 10 months.

12. T.J. Houshmandzadeh vs. Cleveland– He hasn’t been heard from much in the past few weeks. He should have a better performance against the Browns. After all, the last time these two teams met, Cincy nearly scored 50.

14. Brandon Marshall at San Diego– Marshall may turn into a garbage time specialist this week.

15. Lee Evans vs. NY Giants– I didn’t like anything about the Giants’ defense a week ago against Washington.

16. Bobby Engram vs. Baltimore– Can you believe it has come to this for the Ravens? They couldn’t stop Greg Camarillo when it mattered most. Engram can scratch out a TD against this defense.

17. Anthony Gonzalez vs. Houston– Gonzalez asked Peyton Manning for a few more deep routes in the offense a couple of weeks ago. Memo to the rook: when Lord Manning is ready to do that, he’ll let you know.

18. Calvin Johnson vs. Kansas City– You would like to see Johnson end ’07 on a high note. He picked up 100 yards last week in San Diego, but it would be great if we could see more game-breaking ability from him.

19. Donald Driver at Chicago– He started the season as Green Bay’s number one and seemingly has been supplanted in that role by Jennings. The vet needs to step up against the Bears’ defense.

20. Shaun McDonald vs. Kansas City– McDonald is Detroit’s most reliable veteran option at receiver. How troubling.

22. Roddy White at Arizona– The Michael Vick-to-White connection should give Arizona plenty of headaches this week. Head coach Bobby Petrino will be very pleased with what he sees offensively as Falcons’ Vice President of Football Operations Bill Parcells smiles broadly from the press box. If only those last two sentences were actually true.

24. Kevin Curtis at New Orleans– Remember when he slaughtered Detroit earlier this season? I don’t think McNabb remembers it either.

The Best of the Rest…

By Derek Jones
This entry was posted on Friday, December 21st, 2007 at 5:00 pm and is filed under Cheat sheets, Derek Jones, FOOTBALL. You can follow any responses to this entry through the RSS 2.0 feed. You can skip to the end and leave a response. Pinging is currently not allowed.