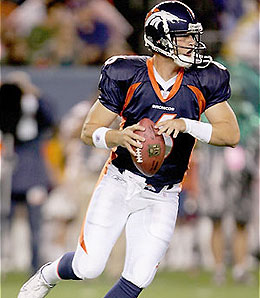 Jay Cutler struggled last week, but he will likely rebound this week at home. (AP)

Ah…Week 14. Fantasy playoffs are starting all over the country. As someone who has, of course, won many fantasy playoff games, I can say with certainty that this is not the time for cuteness. Go with what got you here in the first place. Matchups are great to look at, but good players up their games down the stretch.

1. Tom Brady vs. Steelers – Luckily for Brady owners, the last two weeks probably didn’t do much to hurt their status as the top team in the league. Also lucky for Brady owners is that if their league has bye weeks for top teams, then they don’t have to deal with Brady going against the top defense in the league. I’m not saying the Patriots won’t succeed, but two sub-par weeks combined with facing the Steelers certainly would qualify as a worst-case-scenario. That all being said, Brady’s worst-case-scenario is still better than just about every other quarterback in the league.

2. Tony Romo @ Lions – The biggest worry for Romo is that the Lions’ offense, which is now without Roy Williams, will be unable to keep this a competitive game. If that happens, Romo would probably still be good for about 225 yards and a couple scores. But if, somehow, Mike Martz can will the Detroit offense to a big day, then Romo’s totals could skyrocket to 325 and three or four touchdowns. Go Lions!

3. Peyton Manning @ Ravens – This is a strange matchup for a number of reasons. First, Manning hasn’t exactly had his greatest season ever. In fact, he’s already thrown more interceptions this season than he has since 2002. Looking at this game, the Baltimore defense really could go either way. It could be extremely motivated after the Patriots’ debacle. On the other hand, the Ravens’ defense was calling the New England game their Super Bowl. So what does that make this? Their Pro Bowl?

4. Derek Anderson @ Jets – Anderson has slowed down somewhat over the last four weeks, although that’s a relative term, as he still has seven scores over that stretch. On the plus side, the New York Jets really don’t have much to play for. The Browns’ offense should be on the field for a good portion of the contest. That means another 300-yard game from Anderson.

5. Matt Hasselbeck vs. Cardinals – This season has been something of a war of attrition. Where Donovan McNabb, Jon Kitna, and even Matt Schaub have all enjoyed stints around the number five or six ranking, no one has stayed near it as consistently as Hasselbeck. He hasn’t had much help around him in the offense, but he keeps rolling along. The Cardinals aren’t a bad matchup either. I have a feeling a bunch of Hasselbeck owners will be playing next week.

6. Carson Palmer vs. Rams – I don’t think we were expecting the world last week with Palmer against the Steelers. What was distressing wasn’t that he didn’t throw any touchdowns, it was that there seemed to be no risk taking. This will sound odd, but I wish I could have at least seen an interception, just some sign that Palmer was willing to take the risk to make a big play. Oh well, he should at least toss a couple scores against the Rams.

7. Drew Brees @ Falcons – I tend to not let personal events alter my rankings or even these entertaining little paragraphs defending my rankings. But, I feel I should make an exception so I can remind Brees: Marques Colston is on your team! Colston literally didn’t place in the top 109 in looks from Week 13. That’s incredible. I don’t care who the Saints are playing, that should never happen (especially since I need a big Colston game this week).

8. Brett Favre vs. Raiders – Monitor Favre’s health as Sunday approaches. Even if he plays, he might not be physically prime. Go beyond just whether he’ll be active or not.

9. Philip Rivers @ Titans – It might be tough to start Rivers after last week’s poor game, but that was more on Antonio Gates than Rivers. Gates, for whatever reason, has no ability to do anything against the Chiefs. The Titans have a much improved defense, but they won’t have much success against Gates, which means Rivers should have a solid two-score game.

10. Jon Kitna vs. Cowboys – Without Roy Williams around, Kitna’s statistics are definitely going to come down. Still, this is a Mike Martz-lead offense, which means the passing yards and touchdowns should still be around.

11. Matt Schaub vs. Bucs – Unless Tampa is able to shut Andre Johnson down as well as it hampered Colston, Schaub should continue to reap the benefits of playing with the most underrated wide out in the AFC.

12. Jay Cutler vs. Chiefs – Brandon Marshall has turned into quite an underrated wide out himself. He and Cutler have made up for the injury to Javon Walker. Of course, Walker came back last week for one catch. Woo!

13. Vince Young vs. Chargers – Young has enjoyed a recent rebirth, as he has passed for at least 240 yards every game since Week 10. More importantly, this has opened up the running lanes to the tune of 44 rushing yards per game over that stretch. The touchdowns have still been slow to come along, which is why Young isn’t in my top 10, but if yardage accounts for at least 50 per cent of your scoring, he’s not a bad alternative if your top top option is out or struggling.

14. David Garrard vs. Panthers – Well, Garrard finally threw an interception, which means I no longer have an unhealthy obsession with him. Still, he did have a 250-yard, two-score game. That’s pretty good. I’m expecting similar yardage numbers, but maybe only one touchdown.

15. Jason Campbell vs. Bears – The Redskins aren’t exactly the most prolific of offenses, but this strikes me as a game that will be close down to the end, which means Washington will be in passing situations for a good portion of the game. That could mean a big game, or just a decent game for Campbell. Or maybe it means a lot of turnovers. I mean, really, are you going to start Campbell in a playoff game?

By Andy Goldstein
This entry was posted on Wednesday, December 5th, 2007 at 5:25 pm and is filed under Andy Goldstein, Cheat sheets, FOOTBALL. You can follow any responses to this entry through the RSS 2.0 feed. You can leave a response, or trackback from your own site.