Old MacDonald had a Finn 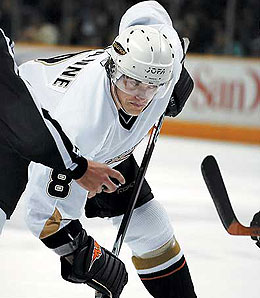 The closest Teemu Selanne is getting to a faceoff these days is having his facial epidermus peeled off from too much sauna action.

It’s hard to get mad at Teemu Selanne. He seems like such a nice fellow, always smiling and driving cool cars at ridiculously fast speeds. Oh, and scoring goals set up by Andy MacDonald.

At least, that’s what he did for two seasons. Now that Teemu’s just lounging around some sauna in Finland, MacDonald’s numbers have gone way south and, not coincidentally, so has a big part of the Anaheim offense and power play. So if anyone on the planet can actually be mad at Teemu Selanne, it’s Andy MacDonald. Let’s look at MacDonald’s numbers:

What’s fallen off too? MacDonald’s power play numbers have gone from nearly 0.5 per game to, well, just about zero. Without his Finnish buddy, MacDonald’s killing fantasy owners with a pace of just about 10 power play points. In fact, all of his numbers are on pace for significant drops, including his shots on goal and shooting percentage.

What else is affecting the Anaheim power play? Currently mired at next-to-last with a miserable 12.9 per cent success rare, the obvious answer to that is the loss of playoff MVP Scott Niedermayer. While Francois Beauchemin’s a quality defenseman, he’s never been destined to match Niedermayer’s offensive output; however, with Mathieu Schneider out for a good chunk of the season, Beauchemin’s been forced to try and do just that. When healthy, Schneider’s put up his share of the points, though he dried up in the second half of November.

By all accounts, Niedermayer should return to the Ducks by late December. There’s no official word on that, but the guy’s skating down in SoCal already, so treat it as the worst-kept secret in hockey. As for Selanne, well, if you spent all day in a steaming room with naked men, why would you go back to playing pro sports?

By Mike Chen
This entry was posted on Tuesday, December 4th, 2007 at 8:28 pm and is filed under HOCKEY, Mike Chen, Team report. You can follow any responses to this entry through the RSS 2.0 feed. You can leave a response, or trackback from your own site.