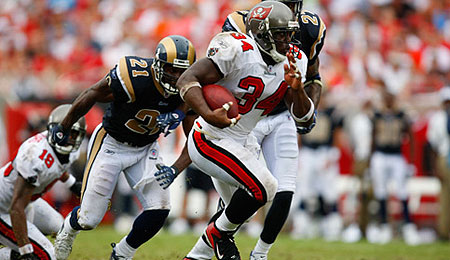 Earnest Graham has excelled since becoming the lead runner for the Bucs.

1. Adrian Peterson @ 49ers – Oh, lord, this is a mismatch. The only downside here is that most Peterson owners got a first-round bye in their playoffs so this 300-yard game probably won’t help them. That’s so sad.

2. Brian Westbrook vs. Giants – Despite a lingering knee issue, Westbrook should be just fine against the Giants. That’s good news, because Westbrook often puts the Giants on a leash, walks them around, and picks up their crap. Er, I mean, he owns them. In fact, he has over 100 total yards, at least one score, or both every time he’s laced them up against them since his second year in the league. In other words, he’s a start.

3. Steven Jackson @ Bengals – He’s back! I had reservations as Jackson returned from injury, but those have been put to rest. He may not get a 50-yard score in this game, but he should be good for two shorter ones.

4. LaDainian Tomlinson @ Titans – While the Titans have been much worse against the run lately, I think all Tomlinson owners are somewhat wary of the the matchup. Also, all of Tomlinson’s top games this season have been followed by a bad one (by his standards). That all being said, this is LaDainian Tomlinson we’re talking about. Just cross your fingers that you get one of the good games.

5. Earnest Graham @ Texans – Few running backs have been quite as consistent as Graham, which is a phrase I never would have expected I’d be writing by Week 14 this season. In fact, Graham might be the definitive example of how crazy this season has been. Coming into 2007, he had 52 carries in three years, none of which resulted in touchdowns. This year, he’s excelling with 176 carries, 737 rushing yards, 228 receiving yards, and seven scores.

6. Willis McGahee vs. Colts – It’s impossible to know if McGahee’s huge game was a result of the matchup against the Patriots, the emotional aspect of the Sean Taylor situation, or just McGahee getting stronger as the season wears on. I don’t think he’ll succeed quite as well in this one, but he is pretty much a must start.

7. Kolby Smith @ Broncos – Okay, Smith didn’t have a fantastic game against the Chargers, but it certainly didn’t leave fantasy owners high and dry. I’m convinced that Smith’s success is a damning indictment of where Larry Johnson is at. Why is no one talking about this? Johnson may never be a top back again and no one seems to notice.

8. Ryan Grant vs. Raiders – While most people overrate Denver running backs just because the Bronco system works well, those same people ignore the Green Bay system, which has been almost as good for just as long. Grant is the latest to benefit, and there’s no reason to go away from what has been working now.

9. Joseph Addai @ Ravens – In case you haven’t noticed, Peyton Manning and the Colts have returned to respectability. If you are an Addai owner, you definitely haven’t noticed, because Addai hasn’t returned to anything. In fact, he’s been a huge late-season bust. If he doesn’t turn it around in this one, it might be too late for many fantasy teams out there.

11. Jamal Lewis @ Jets – Fool me once, shame on you. Fool me six times, shame on you even more, Jamal. Somehow Lewis is on pace for yet another 1,000-yard, 10-score season. The Jets aren’t going to put up much resistance to that.

12. Reggie Bush @ Falcons – With no 100-yard rushing games on the season, Bush is very tough to start. Yes, his receiving statistics might balance things out, but if that doesn’t happen, Bush is dead weight. Unfortunately, Atlanta isn’t really in a great position to stop him. I say

If Selvin Young starts this week, he could run wild against the woeful Raiders’ run defense. (AP Photo/Jack Dempsey) 1. Brian Westbrook vs. Seahawks – Hey, even John Madden is calling Westbrook the best running back in the league right now. The next guy on the rankings might have something to say about that, but […]

1. LaDainian Tomlinson vs. Texans – It doesn’t matter where the Chargers play or when they play, Tomlinson is the top ranked back. And, if the game is moved to Dallas, I’m totally going. 2. Adrian Peterson vs. Eagles – With Ronnie Brown out for the year, Brian Westbrook going against the Vikings, and Willis […]

1. LaDainian Tomlinson @ Broncos – Lord help me this week. Every running back listed has serious question marks around them. It seems as though every back this week is either injured, on bye, or sucking. I’ll do my best. 2. Willis McGahee @ 49ers – He’s not a sneaky play, but McGahee is a […]

Could Steven Jackson become the number one fantasy football stud in 2007? Andy says there’s a great chance it could happen. 1. LaDainian Tomlinson – No, he probably won’t duplicate his 2006 statistics, but there’s no way anyone else can be at the top of this list. Besides, something tells me his fire won’t be […]