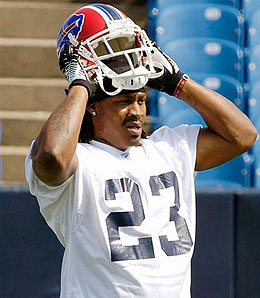 1. Adrian Peterson @ Packers – Umm, so Peterson is pretty good. Like, really good. As in, the best.

2. Willie Parker vs. Browns – Even if Parker didn’t have a tremendous history against the Browns, he’d be one of the top starts. He does have that good history though, including a 109-yard effort in Week One, so it just makes his top status a bit safer.

3. LaDainian Tomlinson vs. Colts – We’re not in 2006 anymore, Toto. In fact, for Tomlinson, it’s shaping up to be his worst season since his rookie year. Okay, 1,300 yards and 14 touchdowns is still a good year, but for Tomlinson, it might as well be a sub-1,000 yard campaign.

4. Marshawn Lynch @ Dolphins – Woo! I called it! I’m the greatest! I’m amazing! Er, ahem. I mean, Lynch certainly had a nice breakout game, didn’t he? I say he keeps it going this week.

5. Brian Westbrook @ Redskins – Despite the rest of his offensive teammates being, well, terrible, Westbrook has been rolling right along. The Redskins possess a tough defense, but he did total over 150 yards earlier in the season against them.

6. Reggie Bush vs. Rams – Maybe 10 years from now, Bush will get to have an Escalade commercial where he talks about getting his shot when the guy ahead of him got hurt. I would find that throughly entertaining.

7. Joseph Addai @ Chargers – Addai is hard to knock down due to tough matchups. This isn’t necessarily because of his pure talent, although he is much better than I thought. It’s just that no defense, however good, works its game plan to stop him. They focus on Peyton Manning and the passing game. Consider yourself lucky, Addai owners.

8. Willis McGahee @ Bengals – Despite getting a little banged up against the Steelers, McGahee still found time to chip in with a touchdown of over 30 yards. It’s runs like that which make me think McGahee could still live up to the hype he produced during his first year as a starter.

10. Clinton Portis vs. Eagles – Woo! I’m awesome! I am just the greatest thing since sliced bread! Wait, that makes no sense. Sliced bread was a terrible bane on our society. Instead of glorious freshly made loaves of bread, we have to put up with disgusting cardboard-esque square things. Curses! Learn to make your own bread, people. It’s a simple request.

11. Marion Barber @ Giants – After three straight scoreless games, Barber has crossed the stripe in both of the last two. So he’s a little streaky, what can you do? Against the Giants earlier in the year, he totaled 94 yards and got a touchdown. I see something like that happening again.

12. Edgerrin James vs. Lions – After last week’s offensive mess that the Cardinals displayed, I have to imagine Arizona will re-commit to the run against Detroit. That’s good news for James and his fantasy owners.

13. Kevin Jones @ Cardinals – I have absolutely no explanation how Jones has been able to have a productive stretch of games as he’s returned from injury. I can only stand and applaud. Wow, I just pulled a Jack Buck. Go me.

14. Maurice Jones-Drew @ Titans – This is probably the toughest runner to gauge this week. If special teams stats help you, then Jones-Drew is worth starting. If they don’t, I’d be more weary. We all know the Titans’ run defense is the best in the league, but Jones-Drew is able to beat teams in so many different ways. Frankly, I say flip a coin.

15. Brandon Jacobs vs. Cowboys – Out of five games this season, Jacobs has three 100-yard efforts. Last time I checked, that’s pretty good. The Cowboys are certainly going to pose a tough challenge, since Jacobs got all of 26 yards in their Week One game, but there’s no reason Jacobs can’t get 60 yards and a score in this one.

16. Justin Fargas vs. Bears – I swear this will be the worst game of the day. I am protesting the fact it will even happen by not talking about any player in it.

18. LenDale White vs. Jaguars – While White has been surprisingly effective over the last few weeks, the good times must indeed come to an end. The Jaguars aren’t exactly a good matchup. They will be able to contain him without much effort.

19. Warrick Dunn @ Pantherss – I’m not sure if I have ranked Dunn in the top 20 in any weekly ranking this year, but after last week’s display of competency, I’m willing to do it. Now don’t make me look dumb, Warrick! Aw, who am I kidding? I am brilliant through and through.

20. Selvin Young @ Chiefs – The story of Travis Henry’s 2007 fantasy life has been pretty funny. In the preseason, so many fantasy publications and experts pegged him a sleeper, that his draft value was actually inflated. Then he lived up to those lofty expectations for a few weeks. Then the whole drug report came out. Then everyone decided Young would be the next big sleeper. Football is awesome.

By Andy Goldstein
This entry was posted on Saturday, November 10th, 2007 at 12:58 pm and is filed under Andy Goldstein, Cheat sheets, FOOTBALL. You can follow any responses to this entry through the RSS 2.0 feed. You can skip to the end and leave a response. Pinging is currently not allowed.