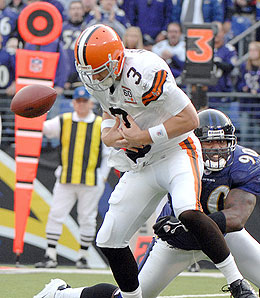 Derek Anderson hasn’t made many mistakes this year for Cleveland.

1. Tom Brady vs. Redskins – With two scores in this game, Brady will surpass his highest career touchdown total of 28. I’m not sure there was much indication anything like this would happen, though I know some were extremely high on the Patriots’ offense in the preseason. The biggest key has been the inconsistent running game, which is allowing Brady to average nearly 33 attempts per game, and over nine yards per attempt, a figure well over his previous high of 7.8.

2. Peyton Manning @ Panthers – While the Patriots’ running game issues have put all the onus on Brady, the Colts’ running game has played quite well. This has quieted Manning’s output slightly, unless you count the endless commercials. Still, he’s nearly a lock for 300 yards and a score or two.

3. Derek Anderson @ Rams – Has a guy ever come out of nowhere to be a top five fantasy quarterback and received less attention? You might think it’s a fluke, but Braylon Edwards is having the kind of third-year breakout season every owner hoped for. He and Kellen Winslow are, believe it or not, one of the best receiving duos in the league. This could be a three-score game for Anderson.

4. Carson Palmer vs. Steelers – I dislike roller coasters. Except for Roller Coaster Tycoon — that game rocked. The point here, though, is that Palmer is giving me mixed emotions. His 35-touchdown, 4,579-yard pace is exactly what I envisioned in the preseason when I ranked him ahead of Manning. The 24 interceptions, though? That makes me throw up a little bit in my mouth, like when I ride a roller coaster.

5. Ben Roethlisberger @ Bengals – I think it’s a damning indictment on a defense when Chad Pennington passes for 272 yards and three scores on you. Nothing else has to be said.

6. Eli Manning @ Dolphins – You know who saw this Plaxico Burress season coming? Me. That’s right. I drafted Burress in the first year of my dynasty league five seasons ago. Yes, I traded him after a year or so, but the point is, I’m awesome. I totally called this. Five years ago.

7. Brett Favre @ Broncos – The Broncos’ defense leaves much to be desired, especially if Champ Bailey isn’t in the lineup. We all know Favre and the Packers are having a pretty good year, so I don’t really feel the need to go too in depth here. Figure it out on your own for once, readers. Geez. I do everything around here.

8. Marc Bulger vs. Browns – Do you have the intestinal fortitude to start Bulger? Most of the news is as good as possible. He is sort of healthy. He has a sort of healthy Steven Jackson back in the lineup. If you don’t do it, I won’t be mad. I don’t know if I could really start the guy either. I do think he’ll end up as a top 10 quarterback this week, though.

9. Jon Kitna @ Bears – I’m expecting a bunch of yards, a lot of points, and a good deal of turnovers from Kitna. That’s just the way NFC North games seem to go. As an aside, the Calvin Johnson/Dwayne Bowe rookie wide out battle could be a very intriguing one down the stretch. Johnson has already turned into one of the better red zone targets in the NFL.

11. Drew Brees @ 49ers – Was the Deuce McAllister injury the best thing to happen to the Saints’ offense? It sure feels that way. Brees and Reggie Bush have picked up their games. Even Devery Henderson made a big play last week. That never happens.

12. Donovan McNabb @ Vikings – Take away the Lions game, and McNabb would have a 10-touchdown pace going this season. That’s just pathetic.

14. Jay Cutler vs. Packers – Cutler had his biggest game of the season last week despite the two interceptions. Clearly, the key player is Tony Scheffler. Cutler and the Scheff are two peas in a pod.

15. Trent Edwards @ Jets – I really feel as though the running game will take precedence for the Bills, but Edwards did have over 225 yards and a score against New York in their earlier meeting.

By Andy Goldstein
This entry was posted on Wednesday, October 24th, 2007 at 12:39 pm and is filed under Andy Goldstein, Cheat sheets, FOOTBALL. You can follow any responses to this entry through the RSS 2.0 feed. You can leave a response, or trackback from your own site.