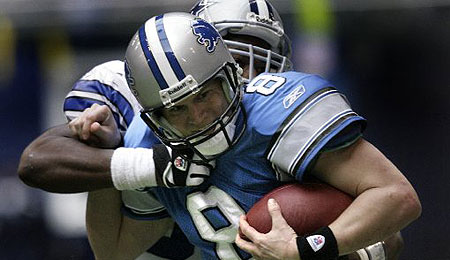 Jon Kitna has been a surprisingly pleasant fantasy option this season.

1. Tony Romo vs. Rams – I guess I’ll buy into this Romo guy. Terrell Owens is playing as well as any wide out in the league and Romo is also finding Jason Witten at will. Those two receiving options ensure that Romo will toss at least 250 yards and two or three touchdowns.

2. Tom Brady @ Bengals – I haven’t looked at the over/under on this contest, but I assume it’s the highest of the week. Last week, the Bengals’ defense allowed Nate Burleson to perform as though he were a legitimate NFL wide out. That alone makes me think Brady will go for 275 yards and two scores.

3. Donovan McNabb @ Giants – If you were wondering, the Eagles’ jerseys last week were the original costumes worn 75 years ago by the team. They were based on the Philadelphia flag, which was designed by William Penn, and used Swedish flag colours because Philadelphia was first settled by, among others, Swedes. See, it all makes sense.

4. Carson Palmer vs. Patriots – Palmer is really in the best situation of any quarterback in the league, from a fantasy perspective. He’s got two elite wide outs to throw to, and a terrible defense ensuring he’ll need to pass all game, every game. The Patriots’ defense can slow the best of them, and Palmer might throw a couple more interceptions, but the yards and touchdowns should be more than enough to make up for it.

5. Peyton Manning vs. Broncos – Maybe this really is the year that Reggie Wayne outperforms Marvin Harrison. I’m sure Harrison has talked to Manning by now about increasing his looks, but Wayne is making the most out of his receptions. All of this has little to do with Manning, who might have a slightly down week against the top pass defense in the league. But what do you care? You’re not going to bench him.

6. Jon Kitna vs. Bears – Kitna has been all sorts of good this year, and the Bears’ defense was not only gashed by the passing game last week, they were also banged up significantly. The bad news is that Calvin Johnson was hurt last week, himself. That’s a significant blow to a team that uses match-up chaos all over the field. Still, Kitna will have every chance to throw for 250 yards and a touchdown or two.

7. Brett Favre @ Vikings – So you’re facing the Vikings, the toughest defense in the league to run on. You have no running game anyway and you have Favre at quarterback. What should happen in this game is obvious, and it rhymes with “massing shifty limes.”

8. Ben Roethlisberger @ Cardinals – Where Palmer is having a great fantasy season because of his defense’s inability to stop anyone, Roethlisberger is having an average fantasy season because his defense is putting the kibosh on everyone. And, if that weren’t enough, the Steelers’ special teams also chipped in with a score last week. As long as the Steelers’ offense only needs to put up 15 points or so, Roethlisberger will just be on the cusp of starting fantasy quarterbacks.

9. Jay Cutler vs. Colts – The Colts’ defense has been fairly good against the pass, as quarterbacks have a measly 78.6 rating against them. Still, those quarterbacks have been put in position to rack up a significant number of passing yards, and Cutler may get lucky with a couple scores himself.

10. Marc Bulger @ Cowboys – What in the world was that? Steven Jackson carried the ball 30 times, and Bulger threw only 26 attempts. Did I mention that the Rams lost by 21 points? These are the games where every Rams’ fan wishes Mike Martz were still around. Anyway, Bulger should have a better game against the Cowboys, but it is getting harder to trust him.

11. Trent Green vs. Raiders – All things considered, Green has been decent this season. Obviously, he’s more valuable in yardage-heavy leagues, but that’s always been the case. Still, he should be good for 250 yards and maybe a touchdown against the Raiders.

12. Eli Manning vs. Eagles – Manning has had a checkered (chequered?) history against the Eagles. In each of their last five meetings, Manning has thrown at least two touchdowns or two interceptions. This doesn’t seem like the time that the former will happen, so I’d err on the side of caution and leave Eli on the bench.

13. Matt Schaub @ Falcons – Without Andre Johnson in the lineup, Schaub had a bit of a letdown. And that’s how simple it is to deal with the Texans’ quarterback at the moment. If Johnson plays, Schaub should be bumped up a few slots. If he doesn’t, then Schaub is nothing more than a backup.

14. Kurt Warner vs. Steelers – If Warner were starting, he’d easily be a top 10 quarterback in this game. Even though he isn’t, I still think he’s a better option than Matt Leinart. Unfortunately, it’s nearly impossible to start the guy.

15. Matt Leinart vs. Steelers – Well, what can you do? Leinart has struggled, and I’m inclined to believe it’s because of his inability to get the football into Anquan Boldin’s hands. I don’t know if that’s why he was benched, but Warner certainly made it a point to seek out Boldin. This will be a very interesting situation to follow this season.

By Andy Goldstein
Tags: Mikko Koivu
This entry was posted on Thursday, September 27th, 2007 at 9:31 pm and is filed under Cheat sheets, FOOTBALL. You can follow any responses to this entry through the RSS 2.0 feed. You can skip to the end and leave a response. Pinging is currently not allowed.