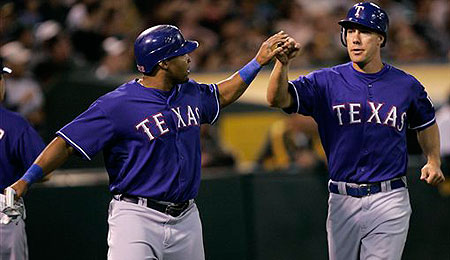 Marlon Byrd, left, is heating up again for the Rangers, so if he’s available, grab him. (AP Photo/Marcio Jose Sanchez)

Well, it is the second round in most leagues right now and the fantasy playoffs are in full swing. Now is when the waiver wire becomes the most important and you have to leave your loyalties at the door.

Marlon Byrd: Over the past week, Byrd has gone 9-for-28 for a .321 BA, knocking in six runs, hitting two long balls, and scoring another six runs. Playoff time means you have to play them while they are hot and jump off the bandwagon as soon as you see them cool down. If Byrd is available in any of your leagues, I suggest taking him over someone that is cooling off.

Kevin Kouzmanoff: The only problem here is that Kouz isn’t see full-time ABs this season. Over the past week, he has hit 11-for-17 (.647 BA), scoring two runs, hitting two bombs, and knocking in six runs. The bright side is that he plays 3B, and that’s normally a weak spot for most teams.

Julio Lugo: I’m not a Lugo fan, but when you hit .318 with five runs scored, four RBI, and two stolen bags over the past week, I’ve got to show you some love. His runs and stolen bases might be the push your team needs to get over the hump to steal the title at the right moment.

The rules for playoffs are simple — show no love, keep a very close eye on the waiver wire, and get the pitchers who are starting in as much as you can. Follow those guidelines and you have the best shot at winning the league crown.

By James Morris
This entry was posted on Saturday, September 15th, 2007 at 7:49 pm and is filed under BASEBALL, The Wire Troll. You can follow any responses to this entry through the RSS 2.0 feed. You can leave a response, or trackback from your own site.