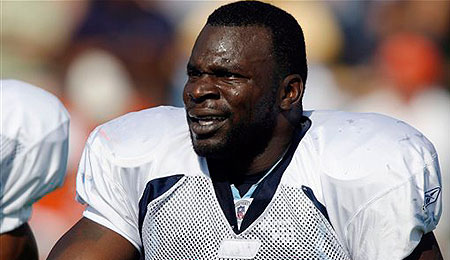 It’s looks like those who pegged Travis Henry as a sleeper were right.

1. LaDainian Tomlinson @ Patriots – Tomlinson was bottled up rather well by the Bears’ defense last week, although he still made an impact with a touchdown run and a touchdown pass. The Chargers’ superstar also has something on his side this week that his opponent’s had in Week One: Motivation. Since last year’s precipitous exit in the postseason, Tomlinson has expressed his displeasure with the Patriots’ organization. And no team in the league has more bad karma built up right now thanks to Beli-gate. I see 200 total yards and three scores worth of vengeance.

2. Rudi Johnson @ Browns – In his last five games against the Browns, Johnson has averaged 141 yards and nearly 1.5 scores per contest. Last week was an obvious disappointment, but the Ravens can do that to anyone. As long as Ocho isn’t usurping the ball, Johnson will not let owners down for a second week in a row.

3. Joseph Addai @ Titans – Anyone might be able to run well in the Colts’ offensive system, but Addai does a bit better than average. He has quicks that allow him to get the most out of every run. He’s not going to hit many home runs, but he’ll be a consistent producer as long as he’s healthy. Expect 130 total yards and a score.

4. Frank Gore @ Rams – Coming back from the broken hand, Gore had a shaky outing. He scored on a nice six-yard scamper, but he looked hesitant on most runs and dropped a couple of passes. Of course, as we recently learned, Gore’s mother passed away on Thursday. He was probably dealing with her worsening condition for some time. I try to never attempt to gauge how tragic real life events will affect a football player’s statistics. At best, it’s pointless. At worst, it’s demeaning. Whatever will be will be, and Gore has proven to be one of the most talented runners in the league.

5. Steven Jackson vs. 49ers – So, uh, WTF, mate? Okay, that’s not safe for work and I know we’ve all watched it about 20 times each. It’s still funny, so deal with it. Anyway, Jackson didn’t run all that well and fumbled twice in Week One. Luckily, Orlando Pace was injured and is done for the season. Why is that lucky for Jackson? Well, after Pace went out last season, Jackson went from a solid back to a top three back. He will become more involved in the receiving game and again lead fantasy teams.

6. Willie Parker vs. Bills – Parker quietly accrued over 100 yards in Week One, but the lack of a score, a fumble, and a substandard 4.0 yards per carry average didn’t instill me with confidence. Much like Gore, I won’t get overly worried just yet. The Steelers opened up the offense, but Parker still got 27 carries. If the carries stay up, Fast Willie will return to a top five back.

7. Travis Henry vs. Raiders – After, oh, three months of hearing how great a sleeper Henry was this year, he went out and proved everyone…well…right. He didn’t get into the end zone, but 183 total yards is nothing to sneeze at. Oh, and the Raiders’ run defense is still not good. Expect destruction. Besides, Henry needs to have a big year so he can pay for all his children.

8. Brian Westbrook vs. Redskins – The dual threat that Westbrook offers was on full display in Week One. He totaled 131 yards, but failed to get into the end zone. The Redskins’ defense is probably comparable to the Packers, but Westbrook is also a threat to go the distance.

9. Adrian Peterson @ Lions – Chester Taylor remains questionable with the hip injury that allowed Peterson to go from an intriguing fantasy back-up selection to a bona fide starter last week. At best, Taylor will be slowed, which means Peterson should see at least 20 carries either way. Despite the 60-yard touchdown reception (his only catch of the day), I would like to see Peterson become more active in the passing game. Assuming he does, expect 130 total yards and perhaps a touchdown.

10. Clinton Portis @ Eagles – As expected, Portis completely annihilated the notion that Ladell Betts is anywhere near as talented as he is. Both runners saw the same number of carries, and Portis had a 5.8 yards per carry average compared to Betts’ 3.5. As long as Portis remains healthy, you’ll see his carries go up. He’s a lock for 100 yards and a score in this game.

11. Willis McGahee vs. Jets – It wasn’t the prettiest of performances for McGahee against the Bengals, but he still did cross the 100-total yard mark. As long as he continues to get the carries, he’ll still be an every week starter. I guess it would also help if Musa Smith weren’t stealing goal line carries. But, that will all be forgiven as long as some distance scores happen.

12. Cedric Benson vs. Chiefs – After last week’s debacle, Benson becomes something of a sneaky start this week. The Chiefs are my pick for the worst team in the NFL. The Bears will jump out to an early lead, somehow, and Benson will get plenty of touches.

13. Edgerrin James vs. Seahawks – If Ken Wisenhunt showed anything positive against the 49ers, it’s that James will get his yards. The Seahawks’ defense is average, and that will allow the former Colt to rack up 100 total yards. It might take 50 carries, but he can do it!

14. Deuce McAllister @ Bucs – And now for good cop, bad cop! Wait. That’s not what this is. Umm, how about McAllister cop, Bush cop? The Saints have to stay more committed to the ground game this week, and the ground game starts with McAllister. He has a better chance than Reggie Bush at a touchdown, and is a safer all around play.

15. Reggie Bush @ Bucs – Who likes safe plays? Safe plays equal safe losses. Bush is the dynamic threat. Yes, he could easily end up with under 50 total yards, but he has just as much of a chance to break one play for 50 yards. McAllister is nice and all, but Bush has a better chance to win your game for you.

16. Marion Barber @ Dolphins – Some guys just have it. Barber is one of those guys. Any time he touches the ball inside the opponent’s 20, he’s got an even chance to score. His yardage numbers won’t be great as long as Julius Jones is the “starter,” but Barber is good for a touchdown or two.

17. Derrick Ward vs. Packers – The Giants enjoy running the ball, and they don’t really care who the starter is. Heck, they kept trying to make fans believe Ron Dayne was a legitimate NFL talent for years. Anyway, Ward is worth consideration, but don’t be fooled into thinking he’s a top 10 back all of the sudden.

18. DeShaun Foster vs. Texans – Well, whatever. Foster ran for over 90 yards and fumbled once. The Texans’ run defense, despite slowing Larry Johnson, are still not good. So 100 yards should be in the offing.

19. Marshawn Lynch @ Steelers – Lynch looked like he might just live up to the hype last week, but the Steelers pose an even tougher run defense than the Broncos did. While the yardage probably won’t look great, he should still get that rushing score.

20. Maurice Jones-Drew – As I said last week, Jones-Drew stands to be quite an inconsistent back this year. And if his coach only gives him seven carries a game, he’ll be an inconsequential one. He’s still a weak starter, and capable of having a huge game, but it’s not a safe bet by any estimation.

21. Shaun Alexander @ Cardinals – We’re probably witnessing the ultimate decline of Alexander here. He’s entering the part of his career when fans expect injuries. It’s a shame, but it’s a fact of the game. He’s playing this week despite injury, but he’ll need 35 carries to truly make an impact.

22. Laurence Maroney vs. Chargers – San Diego just isn’t nice to running backs. It has no respect for them, and, frankly, I don’t like that. Anyway, Maroney was shaky in his debut and there’s no reason to rush him into the starting line up against this team.

23. Larry Johnson @ Bears – There’s just not too much left to say. I’ve made my position very clear. I understand there are many dissenters, and that’s fine. I say don’t start Johnson against the angry Bears if you can at all avoid it.

24. Chris Brown vs. Colts – Every year, Brown “emerges” as a great back, and every year, he injures something and suffers nagging problems all year. He’s very talented, but there’s no reason to believe he’ll last past half time. Quite a shame.

25. Jamal Lewis vs. Bengals – This just has the feel of a game that Lewis might be able to make some plays in. The contest should be practically over by the end of the first quarter, which means there will be plenty of time for a junk score.

26. Ronnie Brown vs. Cowboys – Assuming he still has his job, he’s a player that could run for 100 yards. Unfortunately, he’s got to do it a couple times before I trust him.

27. Brandon Jackson @ Giants – I haven’t given up all hope quite yet, but Jackson disappointed me quite a bit last week. He should still get the chances, but he didn’t show that he’ll make the most of them. Reserve Jackson until he gets it going.

28. Ahman Green @ Panthers – Matt Schaub wasn’t awful and that means Green can be something of a sleeper this year. His touchdown totals will never impress you, but his yards might on any given day.

29. Michael Pittman vs. Saints – With Carnell Williams out of commission, Pittman will get the touches for the Bucs. Sadly, that sentence ended with “the Bucs” and not with, well, “any other team.”

30. Tatum Bell vs. Vikings – No one runs on the Vikings. It’s that simple.

By Andy Goldstein
This entry was posted on Saturday, September 15th, 2007 at 11:02 am and is filed under FOOTBALL. You can follow any responses to this entry through the RSS 2.0 feed. You can leave a response, or trackback from your own site.