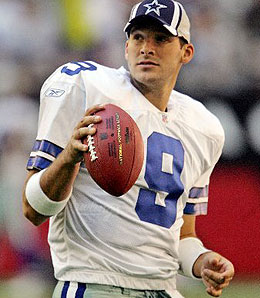 Tony Romo needs to keep getting Jason Witten involved in the pass attack.

1. Peyton Manning @ Titans – If the Titans’ pass defense (sans Pacman Jones) couldn’t hold David Garrardunder 200 yards, then the chance they have of holding Manning under 325 is slim. No, I don’t like him, but he played an okay game last week. I guess. Expect 340 yards and three touchdowns.

2. Carson Palmer @ Browns – Everyone knew last week that Palmer and the Bengals had a tough matchup with the Ravens. Palmer did just fine, passing for two scores. Now the fun really starts. The Browns gave up four touchdowns to Ben Roethlisberger, so the only thing that can stop Palmer is if the Bengals get out to a huge lead too early. Even so, 300 yards and two or three touchdowns looks reasonable.

3. Ben Roethlisberger vs. Bills – Roethlisberger’s final statistics last week probably confused those who didn’t follow the game, but here’s what happened: The Steelers actually were simulating a practice session in Madden ’08. They got to start from the Browns’ 30-yard line every drive and the passer cashed in four times. Anyway, the Bills looked shaky on pass defense without Nate Clements, but at least the Steelers will have to go a longer portion of the field. That will help the yardage numbers.

4. Tom Brady vs. Chargers – I guess Randy Moss cared last week. The former Raider and former Viking returned to his elite status and it carried Brady to a top performance. The Chargers’ defense will do a better job at getting to Brady (assuming the cheating is held to a minimum) than the Jets did, so the numbers have to come down somewhat. I’m thinking 250 yards and two scores will be the final stats exactly.

5. Tony Romo @ Dolphins – As I implied in last week’s quarterback column, Romo just needed to re-find Jason Witten. Check. Romo used his entire arsenal, which he will have to do again against Miami. It’s not as easy a matchup as the Giants, but Terrell Owens makes Romo a safe pick for 250 yards and a touchdown or two.

6. Jon Kitna vs. Vikings – Am I sipping the Kitna Kool-Aid? Well, yes and no. I don’t think he is suddenly an every week starter quite yet. He’ll still have some bad, multiple-interception games without the touchdowns. That being said, the Vikings don’t allow rushing yards. If the Lions move the ball at all, it will be through the air. Kitna will be good for 275 yards, two scores, and three interceptions.

7. Drew Brees @ Bucs – I don’t exactly know what happened to the Saints’ offense last week, but it wasn’t pretty. I’ll go ahead and give them a mulligan here. I also enjoyed the re-emergence of Eric Johnson, a player whose skills Brees will continue to take advantage of. The Bucs’ defense shouldn’t stop the Saints’ offense, but I said the same thing last week, so take it with a grain of salt.

8. Marc Bulger vs. 49ers – So Orlando Pace goes down with an injury and people start fa-reek-ing out. Of course, the same thing happened last year, so it’s time to look at the statistics. After Pace went down, Steven Jackson saw his receptions go way up. Torry Holt finished with only one 100-yard game out of 10 contests (after putting up three in the first six games), and Bulger was only hurt slightly. He may not be a top five quarterback anymore, but he’s still easily in the top 10.

9. Jay Cutler vs. Raiders – As I wrote in this space last time, the “Shutdown” nature of the Raiders’ pass defense is vastly overrated. Yes, they intercepted Kitna twice (honestly, which team hasn’t?), but they also let him throw for a bajillion yards and three scores. That works for your team, and it will work for Cutler as well.

10. Philip Rivers @ Patriots – The Bears’ defense is pretty good. We were all reminded about that in Week One. Still, Rivers looked a little extra shaky, and that’s not good for my sleeper quarterback. The Patriots’ defense isn’t quite as good, and they will also sell out to stop LaDainain Tomlinson. That, to me, means there will be plenty of passing chances, which should be good for 235 yards and a score.

11. Brett Favre @ Giants – Last week was not a good matchup for Favre and the Packers’ offense. This week, however, is a different story. The Giants’ pass defense has been beatable for, oh, I dunno, a decade now. Donald Driver should be a bit healthier and maybe Greg Jennings will even play. Regardless, Favre is a decent back-up option this week if your starter is on the fritz.

12. Jake Delhomme vs. Texans – I still believe Delhomme will be benched if anything at all goes wrong this season, but so far, so good. You don’t need me to tell you what a matchup against the Texans should mean to Delhomme. Just hope things keep going swimmingly. Or, you know, trade Delhomme while he has some value.

13. Matt Leinart vs. Seahawks – Okay, that was a disaster. Anquan Boldin did score, but everything else that happened was pitiful. I remain faithful that it will get better in ZonaLand, but I don’t know if I have the intestinal fortitude to suggest starting him until he shows he has turned it around.

14. Rex Grossman vs. Chiefs – Frankly, the Chiefs are the worst team in the NFL. Quarterbacks just have to get their statistics in before the game is too far out of reach and their squads run for the entire second half. Still, don’t start Grossman. He’s still way too inconsistent.

15. Matt Hasselbeck @ Cardinals – D.J. Hackett suffered an ankle injury and will miss at least a couple weeks of action. That hurts Hasselbeck almost as much as the fact that Nate Burleson will play a larger role in the offense. Lord help us.

By Andy Goldstein
This entry was posted on Thursday, September 13th, 2007 at 1:42 pm and is filed under Cheat sheets, FOOTBALL. You can follow any responses to this entry through the RSS 2.0 feed. You can skip to the end and leave a response. Pinging is currently not allowed.