Dear RotoRob: What Can Brown Do For You? 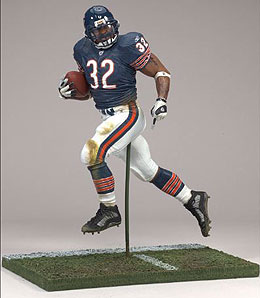 Given Cedric Benson’s unfortunate skewering on the end of a pole, we prefer Ronnie Brown in a one-keeper league.

Okay, here’s a switch from basketball and baseball: a football question.

I am in a 10-team, one-player keeper league. I have Ronnie Brown, Cedric Benson, Thomas Jones and DeAngelo Williams to pick from. The other option would be to throw in all my guys and start anew with what was left over from everyone else’s drops. Players that could be available are: Reggie Bush, Rudy Johnson, Travis Henry, Willis McGahee, Cadillac Williams, Jerious Norwood, Willie Parker, Brandon Jacobs, Laurence Maroney and Maurice-Jones Drew.

I will then get to pick one of these guys then we start the draft. I have the No. 3 pick so I could keep one of my guys and wait to see what was left or drop them all and start. I figure there are probably three other teams that might just throw in their teams and start over, so possibly I would pick third from the whole list rather than third when we are starting the regular draft. What might your order of these picks for me?

Well, I would look to keep Brown. If I had the third pick, I’d set a pecking order to look like this:

Parker has a burst of speed that is near impossible to match, and his receiver skills improved last season. Granted, he isn’t really going to see goal-line touches with Pittburgh’s smashmouth style of football, but he shouldn’t be stopped near the goalline too often anyway.

Johnson is about as steady as it comes from a production standpoint. He has great blocking skills and a good running style to match them. I think he is a good bet over the next two to three seasons, but those beatings are taking their toll as he averaged a career low 3.8 YPC last year. Since you have Brown, Johnson is a solid No. 2.

McGahee is a tough back who can actually catch the ball better than he has shown so far in his career. He isn’t the exact same back as he was before the injury, but he has a defense behind him now that will keep him in good field position and he won’t need to break those 50 yarders anymore.

That’s my order for who I take at No. 3. Bush is the sexy pick at No. 1, but I am not really sold on him being an every down back because of his lack of power. I figure he will go No. 1 or No. 2 because of his name, but if I have the No. 1 pick, I take Parker.

By James Morris
This entry was posted on Sunday, August 12th, 2007 at 4:23 pm and is filed under Dear RotoRob, FOOTBALL. You can follow any responses to this entry through the RSS 2.0 feed. You can leave a response, or trackback from your own site.