Dear RotoRob: Caught With My Pence Down 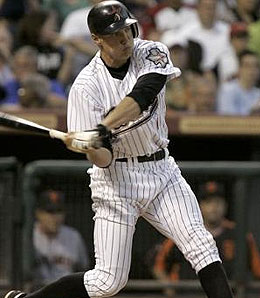 With Hunter Pence out, we explore possible replacements for your fantasy team.

Hey, my man, it is me again with a baseball question. Hunter Pence in on the DL and I need to pick up a guy. Here is a short list of players available. Now, if there is a guy out there that may have just gotten a new gig or moved into the starting lineup somewhere he may not be on this list.

I like guys like Stewart, Dave Roberts, and Cabrera. Stewart and Roberts are consistent. They won’t wow you, but you know what you are going to get with them. Melky has the fortune of playing on the Yankees and they are starting to heat up as a team now. If any one of those guys are available, I’d look at them. I might even take Cabrera first over the others just because of the lineup the Yankees put out there.

Thanks to the loss of Hunter Pence, I’ve got a hole in my outfield.

Who would you pick up while Pence is down? My choices are: Alfredo Amezaga, Jose Cruz Jr., Luke Scott, Chris Burke, Ryan Klesko, So Taguchi, Kevin Mench, Tony Graffanino and Scott Hairston.

If I needed an outfielder right now, I would be looking at Melky Cabrera, Burke, Chris Young, Dave Roberts, or Rob Mackowiak, in that order. If I am forced to pick from the list you gave me, I would go with Amezaga. But, I would look for the ones I gave you first to see if they are available.

Man, my baseball team is falling apart every day. Okay, so Chase Utley has gone down and now I need to pickup a second baseman or second base-eligible player. Some of the guys on the waiver wire are:

Let me know what you think. I have Ray Durham as my backup, but would like to have another option.

Going with those guys, I’d have to run with Theriot or Pedroia. They are playing the best ball of the group right now and the Cubs/Red Sox have the most to play for. I would very rarely pick a Devil Ray at this point in the season if my team needed a replacement.

By James Morris
This entry was posted on Wednesday, August 8th, 2007 at 4:39 pm and is filed under BASEBALL, Dear RotoRob. You can follow any responses to this entry through the RSS 2.0 feed. You can leave a response, or trackback from your own site.