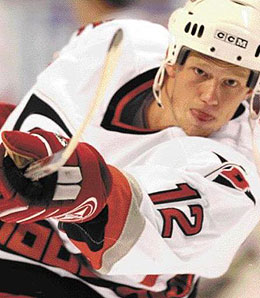 Is this the face of danger in professional hockey? Are you afraid yet?

Why should hockey be left out in the cold in a summer of sports controversies? Basketball has its gambling scandals, baseball has its steroids issues, football has its share of role models (which we’ve already discussed ad nauseam). So what about some legal issues related to hockey to throw onto the fire?

Well, less than two weeks ago, a couple of NHLers accommodated us, but they were the least likely of players to go offside of the law.

From everything ever discussed and written about Thunder Bay’s Staal clan, these people are the salt of the earth. So imagine my surprise when two of them – Eric and Jordan – were arrested on July 25 for misdemeanor disorderly conduct and obstructing the legal process after Eric’s bachelor party got out of hand.

Eric and Jordan, along with 13 others, were busted for essentially disturbing the peace at a resort in Minnesota.

It’s another blow for Eric, capping a very forgettable season. One season after his tremendous breakout year (45 goals, 55 assists, 100 points) that helped Carolina capture its first Stanley Cup, Staal slipped to 30 goals, 40 assists and 70 points as the ‘Canes not only failed to defend their title, they didn’t even make the playoffs.

And now he’s in legal trouble. It’s a bitter pill to swallow for a player who appeared to be one of the best young stars in the NHL just a season ago.

Worse yet, and lost in the rest of this story is the fact that at the age of 22, he got married. Dude, you’re going to make $9.5 million over the next two seasons, and you’re settling down? Is there something seriously wrong with you?

Staal, who did the marriage deed on Friday, will be arraigned tomorrow. As of this writing, he has yet to enter a plea, but if I were his lawyer, I’d plea stupidity. Like I said, young, rich and married are three words that should never appear in the same sentence.

Obviously, having not been present (somehow, RotoRob’s invitation to the bachelor party went awry), I can’t comment about how wild things got. But I’ve been to plenty of bachelor parties in my time, and they almost never wind up with arrests at the end of the night. Apparently, there was “screaming, yelling and playing loud music” going on. Oh, no. Sounds like the business retreats I used to go on when I actually worked for a living.

After several warnings that ultimately led to them being kicked out of the resort, authorities finally arrested the group as they gathered on the highway and harassed motorists. What does that entail? Mooning them? There’s not much a drunken guy can do to a speeding vehicle except get killed by it.

This is obviously a situation that’s been blown out of proportion. Okay, so they got drunk and stupid – it happens. Assuming this is an isolated incident, and it doesn’t represent the first poor decision in a series for Eric Staal, I can’t see how this means anything.

It’s probably the best hockey has to offer in this summer of professional sports discontent, but in the grand scheme of things, it’s a joke. Troubled athletes in other sports are laughing at this episode as if watching the sport of hockey wade into the pool of criminal activity – wearing water wings.

By RotoRob
This entry was posted on Tuesday, August 7th, 2007 at 12:33 pm and is filed under HOCKEY. You can follow any responses to this entry through the RSS 2.0 feed. You can skip to the end and leave a response. Pinging is currently not allowed.