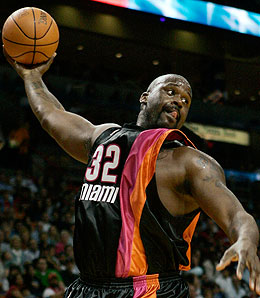 If the X-Mas lineup in any indication, Shaq vs. Kobe is no longer a top draw.

Perhaps we can finally lay the Kobe Bryant–Shaquille O’Neal rivalry to rest. In the clearest signal yet that this feud is old news, for the first time in four years the Lakers and Miami will not be playing each other on Christmas Day.

Oh, not to worry, both teams will be action as we open our presents. It’s just that they’ll be taking on different opponents.

The ESPN/ABC triple header on X-Mas will consist of: Cleveland at Miami, Phoenix at the Lakers and Portland at Seattle.

Are you sensing some new trends developing based on this lineup?

First of all, forget about Shaq. He’s been on a downward spiral for several years. In his stead, LeBron James vs. Dwyane Wade seems to have taken over as the ultimate matchup. And why not? King James, despite his off year in 2006-07, has definitely ascended to the throne as far as NBA supremacy goes. Guiding the Cavs to their first trip to the NBA Finals sealed that deal.

And Flash, despite the fact that his knee and shoulder may prohibit him from being at full strength to start the season (hell, it’s conceivable he won’t be at the top of his game even by the time this tilt rolls around), has earned his place in the pantheon thanks to his ring two years ago.

Then Kobe gets his centre stage, facing off against the Suns, probably the most exciting team in the NBA. It’s certainly gratifying to see Steve Nash continue to gain the recognition he so richly deserves. (Of course, Phoenix – especially since the addition of Grant Hill – offers up several marquee names worthy of competition with our turkey dinners).

Perhaps most interesting, however, is the league’s choice for the final game, which will pit Greg Oden and Kevin Durant – the two most highly-touted rookies to enter the NBA in several years – against each other. At a time when the NBA needs to deal with a big black cloud hanging overhead in the form of Tim Donaghy, looking to the future to focus on a pair of bright young stars is a brilliant marketing move by the association.

Well, I guess I know what I’ll be doing on Christmas Day.

While we’re discussing televised sports, here’s a blast from the past for you. Remember Kyle Peterson, a three-time All-American pitcher at Stanford that the Brewers grabbed with the 13th overall pick in 1997? Supposedly destined for stardom, injuries decimated Peterson’s career, and he wound up winning just five major league games before hanging up the spikes.

Well, Peterson sure landed on his feet after his baseball career washed out. He’s done very well for himself in the broadcasting arena as an NCAA baseball analyst. Peterson is definitely a wonderful example of someone taking lemons and making lemonade.

By RotoRob
This entry was posted on Sunday, August 5th, 2007 at 2:18 pm and is filed under BASEBALL, BASKETBALL, Sports broadcasting. You can follow any responses to this entry through the RSS 2.0 feed. You can leave a response, or trackback from your own site.