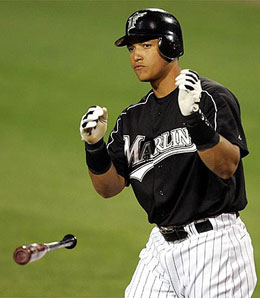 Miguel Cabrera’s progression as one of the finest young hitters in the game earns him the second slot on our third base rankings.

The hot corner is a top-heavy position, so if you don’t land one of the first half dozen or so, you’ll quickly be looking at a shaky option. Obviously, there aren’t many sources of speed at third, but there are several young fantasy studs in Miguel Cabrera, David Wright, Aramis Ramirez and newcomer Ryan Braun that should ensure a superb crop of choices at this position for years to come. Of course, there are also plenty of inconsistent and injury prone players (Troy Glaus, Chipper Jones, Scott Rolen and Hank Blalock) that can make selecting a third baseman a crap shoot.

1. Alex Rodriguez, NYY — A-Rod is a clear top three fantasy player and could easily be justified as the number one overall pick in a keeper league. As he sits on the cusp of 500 career homers, Rodriguez has put last year’s post-season nightmare to rest and is hitting with more power than he ever has in his fantastic career.

2. Miguel Cabrera, FLA – Cabrera brings everything to the table but speed. With 25 homers already, he’s got a good shot at his first 40-jack season, but will certainly top his career high either way. He’s simply a fantastic hitter any way you look at it.

3. David Wright, NYM – As we discussed, there aren’t a lot of options at third who will steal you a base, but Wright offers a power/speed combo that’s tough to beat. While Wright’s pop has slipped a bit in 2007, he’s already topped his career high in thefts, making for a fine fantasy tradeoff. And at the age of 24, the best is yet to come.

4. Aramis Ramirez, CHC – He always seems to have one injury per year, but A-Ram has become a top 10 hitter in the NL with his career-best .320 mark. Throw in his power and production, and you’ve got one of the better sticks available at the hot corner.

5. Chone Figgins, LAA – From a pure hitting perspective, Figgins is enjoying his finest season and there’s been no one hotter in all of baseball since the end of May. Throw in near-qualification at second base, and you’ve got yourself a fantastic asset and the only pure basestealer available at third.

6. Ryan Braun, MIL – Braun has established himself as a serious power threat who can hit for an extremely high average and swipe some bases. Let’s see how it looks after his second go around, but it’s safe to say that he will be a force for years to come.

7. Chipper Jones, ATL – Jones is using his superb on-base skills to put together a season that rivals his 1999 MVP campaign. He’s proved he’s still highly productive; the problem in owning Chipper remains the same: he hasn’t stayed healthy enough to come anywhere near 600 plate appearances since 2003.

8. Garrett Atkins, COL – After a slow April and even worse May, Atkins has bounced back nicely, putting up numbers the past two months more in line with his breakout 2006 season. He’s a durable option who provides nice pop.

9. Ryan Zimmerman, WAS – Another durable youngster, Zimmerman is on pace for a career high in homers, but his run production has been limited playing for a crappy Nats team that is not providing any help by getting people on base in front of him. Still, we’re talking about a tremendous building block for any fantasy team.

10. Adrian Beltre, SEA – He’s certainly not a 40-120 man, but Beltre offers very solid all around numbers. His on-base skills are not yet back to the levels he attained in LA, but Beltre is progressing in this area and is currently one of the hottest hitters in the AL with 30 RBI in July.

12. Troy Glaus, TOR – Small wonder the Jays are dangling the injury-prone Glaus with him suffering through his worst power season since 2002.

13. Eric Chavez, OAK – Chavez had stayed relatively healthy this year and was enjoying a bit of power rebound, but his back has cost him the last four games, making yet another DL trip a possibility. The .240 BA from a guy who looked like he’d been a pretty strong hitter, average-wise, earlier in his career is a disappointment, and he doesn’t stay in the lineup enough to live up to his potential.

14. Alex Gordon, KC – Okay, so the pre-season shoo-in AL ROY winner has been quite inconsistent this season. But given his .310 BA since the break and his potential as a big-time run producer capable of stealing a base, next season could be a very good year for Gordon. It will be quite surprising if he isn’t a top 10 third baseman within a year and, going forward, the sky is the limit here.

15. Edwin Encarnation, CIN – After such a promising 2006, Encarnacion has slipped this year, but it’s way too early to give up on him. Obviously, his RBI chances have been diminished batting eighth on the Reds as he has found himself on occasion, but I love his long-term potential and expect a big rebound from Encarnacion in 2008.

16. Evan Longoria, TB – If it doesn’t happen by the end of the year, in 2008 you’ll certainly see Longoria push Akinori Iwamura to second base now that Ty Wigginton has been dealt. Longoria is a 21-year-old with 21 homers and a 930 OPS in just 105 games in Double-A. Within two years, he’ll be battling Gordon for the title of best young third baseball in the AL.

17. Scott Rolen, STL – Rolen pitches in a bit in the SB department, but just six homers from a two-time 30-homer man makes us wonder if that shoulder will ever fully heal.

18. Hank Blalock, TEX – Blalock’s career has been in decline since his breakout 2003 season, and just when it appeared he was rebounding this year, injury destroyed his 2007. Blalock was diagnosed with thoracic outlet syndrome, a condition affecting the nerves that pass through the shoulder into the neck. Surgery in May to remove a rib was designed to improve the blood flow to his arm, but has knocked him out until at least last August. Having said that, I haven’t given up on Blalock yet, and neither should you.

19. Melvin Mora, BAL – Mora has also been slipping since his big year, in 2004, when he won the AL Silver Slugger at third. He’s currently out with a foot injury, but is expected back shortly.

20. Josh Fields, CWS – Fields took over as the everyday third baseman when Joe Crede underwent season-ending back surgery. The youngster is holding his own and showing some developing pop, but the problem here is simple: an 1170 OPS vs. lefties compared to just 560 vs. righties. Unless Fields wants to be a platoon player, he’ll need to improve that before 2008. The spectre of a healthy Crede next year also clouds Fields’ future to an extent. The bottom line, though, is if he hits righties, he’ll play somewhere.

21. Chad Tracy, ARZ – A lack of speed plus an inability to duplicate his big 2005 season may relegate Tracy to the lower tier of everyday third baseman. Is it possible his best days are already behind him? He’ll need to prove otherwise before we feel comfortable recommending Tracy.

22. Akinori Iwamura, TB – Iwamura has slipped badly after beginning the season like a house on fire. He has decent gap power, but as discussed above, Longoria could soon move Iwamura over to second base.

23. Kevin Kouzmanoff, SD – Given that his on-base skills are still substandard and that he has no speed, I would have at least liked to see some development in Kouzmanoff’s power game this year. Beware that Morgan Ensberg or Mike Lamb could arrive in town and steal some of Kouz’s PT.

24. Pedro Feliz, SF – Feliz has really improved his contact rates this season, and that’s definitely offered him a slight boost as a hitter. He’s on fire since the break (1010 OPS), but at the end of the day, he’s still Pedro Feliz, and that’s simply not very exciting or useful for fantasy purposes.

25. Casey Blake, CLE – Blake’s homers are turning into doubles, his run production has slipped and even with an improved strikeout rate, he’s still whiffs too often (84 already).

Best of the Rest (in no particular order)

Mike Lamb, HOU: Great contact hitter with some pop but not really an everyday player.

Mark Reynolds, ARZ: His BA has dropped over 100 points in the last seven weeks.

Wilson Betemit, NYY: Won’t see much time in New York behind A-Rod, but is still a strong super-sub type with nice power.

Nomar Garciaparra, LAD: Explain to me again why the Dodgers re-signed him?

Jose Bautista, PIT: He offers a bit of speed, but is middling overall and is currently out.

Brandon Inge, DET: He’s learned to take a walk, but his extra-base pop has slipped badly.

Joe Crede, CWS: Not having off-season surgery last year proved to be foolish.

By Tim McLeod
This entry was posted on Tuesday, July 31st, 2007 at 3:00 pm and is filed under BASEBALL, Cheat sheets. You can follow any responses to this entry through the RSS 2.0 feed. Both comments and pings are currently closed.