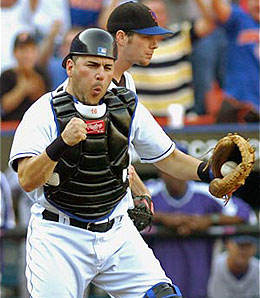 Given his struggles over the past couple of months, some DL time wouldn’t be the worst fate for Paul Lo Duca.

Paul Lo Duca’s toughest season since 2000 took a turn for the worst Saturday when he hurt his right hamstring in the seventh inning of the nightcap of the doubleheader and had to come out. He’s scheduled to have an MRI today, but has said he’ll play Tuesday, barring a gunshot wound. (Of course, considering his apparent history of being in debt to illegal bookies, such an eventuality wouldn’t be a stretch.) At any rate, Lo Duca’s 675 OPS is his lowest in seven years (since he was with the Dodgers), and can be blamed on struggles since the end of May. Major problems against righties (batting just .236 for the season after going .311 against them last year), have contributed to just a .223 mark over the past two months, not exactly helping him live up to his billing as a late 15th round selection in our pre-season draft. Curiously, Lo Duca has managed to match his home run total (five) from 2006, despite having the highest ground ball of his career.

If Lo Duca lands on the DL, Ramon Castro will take over as the main man. Ironically, third catcher Sandy Alomar Jr. had been DFAed on Friday with Moises Alou coming off the DL, so Alomar can’t come back back until at least he clears waivers on Wednesday. As a result, the Mets will probably have to call up Mike DiFelice from Triple-A today; luckily they still have a roster spot open after Mike Pelfrey was farmed out yesterday.

Castro, by the way, has deserved more PT for a while, so perhaps the injury to Lo Duca will be just the impetus the Mets need to tweak the PT situation behind the plate. Lo Duca is extremely tough and very hard to knock out of the lineup, but given his batting woes and the fact that Castro is enjoying the finest season of his career, doesn’t it make sense to hand the backup an extra game a week? In 35 games this season, Castro has already scored 15 runs while showing fantastic power, with no difficulty hitting righties or lefties. And he’s as hot as can be (.481 this month) just as Lo Duca is tanking. Hello? Castro could really help deliver a jolt to the Mets’ offense.

Back in mid-April, I speculated that the Mets would trade Lastings Milledge for pitching help, especially in light of Carlos Gomez’s great start. Obviously, this was one move in retrospect that they are quite happy never transpired. With Carlos Beltran hurting, Milledge has been a revelation, leading the team in RBI since the All-Star break. After getting raps in both games yesterday, he’s now hit in eight straight, batting at a .419 clip over that stretch. In deeper leagues, he’s starting to get plucked off the wire. Note, however, that he seems to have a bulls-eye on his target, getting nailed last night for the third time since Tuesday.

So far, Marlon Anderson’s second tour of duty with the Mets isn’t working out so well. He went bananas with the Dodgers late last year, but was unable to duplicate his efforts in 2007 and was released earlier this month. Immediately signed by the Mets to a minor league deal, he spend a week in Triple-A before being summoned to the big club a week and a half ago. Since then, Anderson has hit just .200 with no power. Because of his speed, he makes a decent pinch runner, but I wouldn’t be surprised if Anderson wears out his welcome on a second club this season real soon.

Why isn’t Orlando Hernandez getting more love in fantasy leagues? He’s currently owned in just about a third of the combined leagues out there, yet after Saturday’s game, he’s now 3-0, 2.42 since the break, with just 15 hits and 10 walks allowed against 24 strikeouts in 26 IP. While the 85 Ks in 104 1/3 innings isn’t his best work, an improved ground ball rate has helped Hernandez limit the long ball and, as a result, his ERA of just over 3.00 is currently a career best. Yes, El Duque is an injury risk, but he’s someone who can help your stretch run and should be owned as a result.

While Guillermo Mota is showing signs of life recently (2.70 ERA with .211 BAA since break), overall, he’s really been pathetic since returning from his 50-game suspension at the end of May. Last year, you may recall, Mota was a major revelation down the stretch for the Mets after coming over from Cleveland, where he had sucked. Looking at his reduced strikeout rate and lame 5.40 ERA this year, it’s become pretty obvious that the new, non-performance enhanced version of Mota is not worth owning. I don’t see him working his way back into a set-up role any time soon.

Alomar’s stay in New York lasted all of three weeks. This has got to be the final stop for the 41-year-old backstop, doesn’t it? He’s hit very well at Triple-A this season, but come on

By RotoRob
This entry was posted on Sunday, July 29th, 2007 at 11:41 am and is filed under BASEBALL, Team report. You can follow any responses to this entry through the RSS 2.0 feed. You can skip to the end and leave a response. Pinging is currently not allowed.