The Wire Troll: Young and Restless 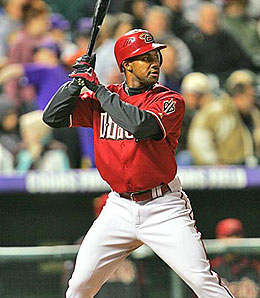 Take another look at Chris Young — he’s lighting it up in recent days.

You know what the hardest thing to do is sometimes? To come up with someone for you to take a look at. I mean, sometimes there isn’t anyone I really see, but management cracks the whip and I am forced to throw out some names. Luckily, this isn’t one of those weeks as I really do have some people for you to look at. But, they all come with their own amount of risk.

Chris B. Young: Young is starting to really starting to heat up now and is free in many leagues. Hitting for a .286 BA with nine runs, two home runs, three RBI, and four stolen bases in the past week makes him one of the hottest free agents available. If you have a hole in your OF, or are looking to replace someone not really getting it done, I would recommend Young.

Mark Ellis: This is one move I make reluctantly, actually. Ellis couldn’t hit water five times if he fell out of a boat 10 times. But, over the past week he has scored six runs, while hitting four homers and knocking in five runs. That .210 BA means the streak can end at any moment, but while he gives you runs, homers and RBI, he may be worth a look if you had Chase Utley and find yourself with a big hole at second base.

Josh Fields: Not that I think Fields will be on my team this year, but if you need someone to keep in mind when you realize that third base is a very thin position, he’s someone to consider. Fields has been off and on all season long, and right now he is on. Going 9-for-28 (.321 BA) while scoring four riuns, knocking three home runs and nine RBI in a week is always nice from the 3B slot. I’d say give him a chance, but keep your eye on him as he cools off as fast as he heats up.

By James Morris
Tags: Arizona Diamondbacks
This entry was posted on Saturday, July 28th, 2007 at 11:02 am and is filed under BASEBALL, The Wire Troll. You can follow any responses to this entry through the RSS 2.0 feed. Both comments and pings are currently closed.